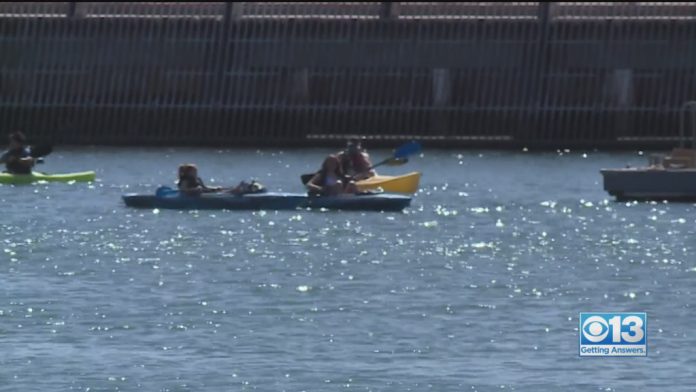 SACRAMENTO (CBS13) – With the sun out, the fun was also out on Sacramento area waterways on Saturday.

“We came to treat ourselves, ride on the jet ski,” Michael Rodriguez, who was visiting Discovery Park, said. “Everybody’s coming out here. Get in the water, don’t get wet, stay cool, feel the breeze.”

“The reason why we like being out here is it’s just peaceful. You’re outside. You’re enjoying nature,” Kathy Oupachak, who was visiting Lake Natoma, said.

With temperatures anticipated to hit 90 for the first time this year on Sunday, everyone’s looking for some cooler comfort.

More people on the water meant first responders have to be on alert.

“Everybody does everything that they can to protect themselves in this early season but, of course, as we move later into the summer,” Captain Chris Vestal, Sacramento Metro Fire Department, said.

It’s not just about water safety but the water itself.

Experts are warning people about how the water can affect you when it’s at around 50 to 60 degrees in temperature. Metro Fire told CBS13 the chilly water can shock your respiratory system and muscles with the contrasting air temperature.

“Most people don’t realize the deception of the water. The water is powerful. There’s a lot of current,” Vestal said.

“There’s a lot of pounds per square inch against your body that you have to fight through to stay safe in it.”

So whether you’re chilling on the shoreline or cutting through the current, play it safe while trying to keep cool.

“Enjoy yourself but also be safe. That’s the number one rule. Take care of numero uno,” Tyler Redick, who visited Discovery Park, said.

Metro Fire also told CBS13 there’s a bit of a monkey wrench when it comes to launching their boats for a potential rescue.

The lower water levels have made some access points on the river unavailable at times for the department’s boats.

Florists warn of flower shortage ahead of Mother’s Day

Trump tweets amid indications he is now under investigation

How sleep impacts those with metabolic syndrome

Surfers brave the night to avoid traffic on the waves

Commencement speakers share their thoughts with the class of 2017