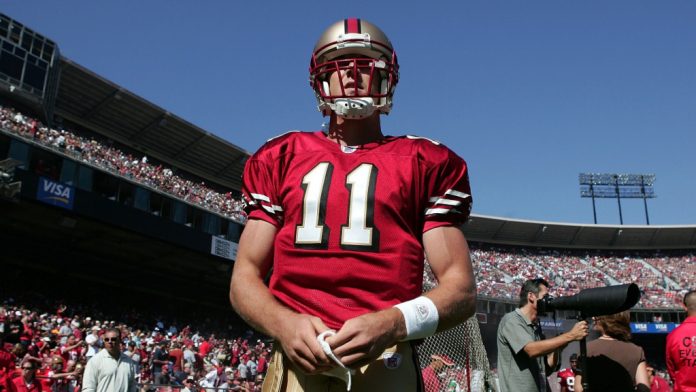 SANTA CLARA (AP/CBS13) — Alex Smith, the San Francisco 49ers’ former No. 1 overall pick in 2005, is retiring from the NFL after making an improbable comeback from a broken leg.

Smith announced his retirement Monday on Instagram, saying he still has plenty of snaps left him but is calling it quits to enjoy time with his family. He turns 37 on May 7.

Smith earned AP Comeback Player of the Year honors for getting back on the field last season, two years removed from his gruesome injury that required 17 operations.

Washington released Smith in March and signed veteran quarterback Ryan Fitzpatrick during free agency. Smith initially expressed his intent to keep playing but decided not to pursue another contract.

Smith played 14 seasons for San Francisco, Kansas City and Washington. He threw for 35,650 yards and 199 touchdowns in 174 regular-season games and played in seven playoff games.

Smith broke his right tibia and fibula in November 2018 against Houston. He was hospitalized for almost a month and survived a life-threatening infection in addition to the operations.

He spent the next year and a half rehabbing and was back at practice when Washington assembled for training camp last summer. His first game action came in relief in October when Kyle Allen was injured, and he made his first start at Detroit weeks later.

Players around the league were quick to honor Smith, including his former 49ers teammate Frank Gore.

Blessed to start this @NFL journey with Alex Smith #QB1

Wishing you and the fam all the best

Smith was 5-1 as a starter in 2020, including a victory at Philadelphia in Week 17 on a strained right calf that clinched the NFC East title for Washington. The injury prevented Smith from playing against Tampa Bay in the wild-card round the next week.

Trump urges GOP senators not to give up on Obamacare repeal...