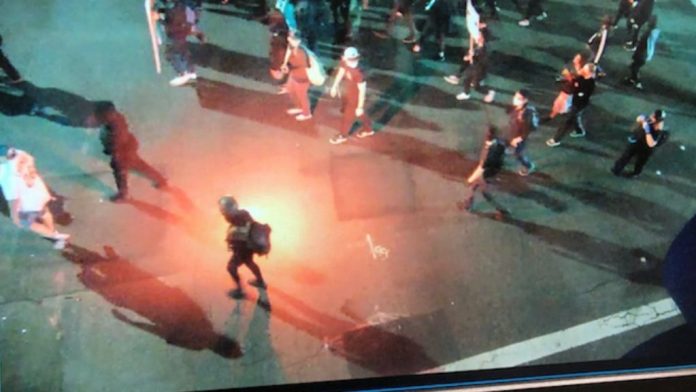 SACRAMENTO (CBS13) – Four officers were injured as protesters again gathered in downtown Sacramento on Saturday night speaking out against the killing of Daunte Wright and others by police.

The officers were reportedly hospitalized after being sprayed with an unknown liquid irritant, police said. No arrests were made.

At this time, we have 2 reports of vandalism that occurred. 4 officers were transported to a local hospital for inj resulting from being sprayed with an unk liquid irritant. No arrests made, however investigators are following up on these incidents.

At around 9:20 p.m., dozens of demonstrators were in the area of 15th and L streets near the California State Capitol.

The Sacramento Police Department said just after 9 p.m. that the event was promoted on social media and people were advised to utilize black bloc tactics, which means to wear black clothing and other items to conceal their identities.

According to police and the Sacramento County Sheriff’s Office, an abandoned duffle bag filled with rocks was located near a government building, but it was not clear if the bag was related to the protest.

At around 9:40 p.m.. the crowd in Sacramento was seen passing by Lowbrau in midtown. Sacramento police declared the event an unlawful assembly after instances of vandalism occurred.

The sound of glass breaking could be heard as the crowd reached 20th Street and police said demonstrators threw rocks at officers.

Some incidents of vandalism have been observed. Individuals from the group have thrown rocks at officers as they march. Unlawful assembly announcements are being made to the group.

Shortly after 10 p.m., police officers began to create a barricade in front of the group. The group had largely remained in an intersection along 20th Street near Lowbrau. Just minutes later, the crowd forced their way through the barricade and continued moving through the streets before eventually making their way back out near Lowbrau.

The group started to disperse at around 11 p.m.

Wright, a 20-year-old Black man, was fatally shot by a Brooklyn Center, Minnesota police officer during a traffic stop on Sunday. The city’s police chief said the officer, identified as Kim Potter, meant to use her Taser on Wright but accidentally shot him.

Annie Leibovitz on how partner Susan Sontag “set a bar”

People stranded on Sanibel Island after road cut off by Irma

The dangers of stopping cholesterol medication