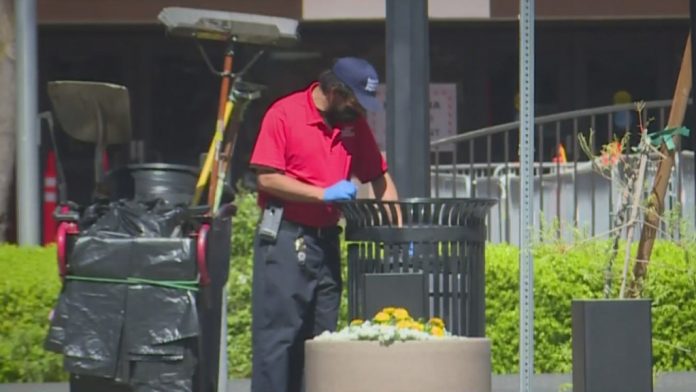 MODESTO (CBS13) – A steady income and a roof over their heads are the two things most everyone can appreciate in their day-to-day lives – but not everyone is so fortunate.

Now, a new partnership in Modesto hopes to bring that to the homeless community and change the conversation on how people help.

Chris Mclintock of Modesto knows the streets of downtown Modesto well, and it’s not only because he cleans them.

“I know a lot of the homeless people out here now,” he said with a smile and a laugh, as it’s a community he’s come to know.

He’s a part of it himself.

“We are homeless – and it’s all depressing,” Mclintock said.

“When my wife died, that’s about when everything went downhill,” he said.

But these days, things seem to be looking up. For the first time in a long time, Mclintock is making money and working again.

“It’s been a real big confidence builder,” he said, explaining how he’s working towards his life goal. “Having a place, being able to work and pay my bills comfortably.”

That dream is closer to coming true with the help of the Camp 2 Home initiative. It’s a partnership between the City of Modesto and the Modesto Downtown Streets Team.

“Meet them where they are, figure out what their needs are, build them up,” said Greg Pensinger, the director of the Downtown Streets Team, detailing the goals of the program.

Camp 2 Home connects those on the streets with resources, jobs, and eventually a subsidized home.

“It doesn’t happen overnight, not everyone is going to be ready right out of the gate,” Pensinger said. “We want to really pay attention to that foundation building.”

So people like Mclintock, can once again find routine and purpose.

“You don’t really have those things when you’re homeless. Everything is bleak,” he said. “That’s probably why they can’t see the light at the end of the tunnel.”

Now, he says he can finally see that light.

“It means taking my life back,” Mclintock said.

He’s one of the first in what could be several success stories in the future – providing a steady life and shelter.

Staff with the City of Modesto said this is a pilot program for now, but they hope data collected at the end of the year proves it’s worthy of keeping. If it’s successful, they also hope other cities may be able to implement something similar.

Man bikes across the U.S. to educate America about the solar...