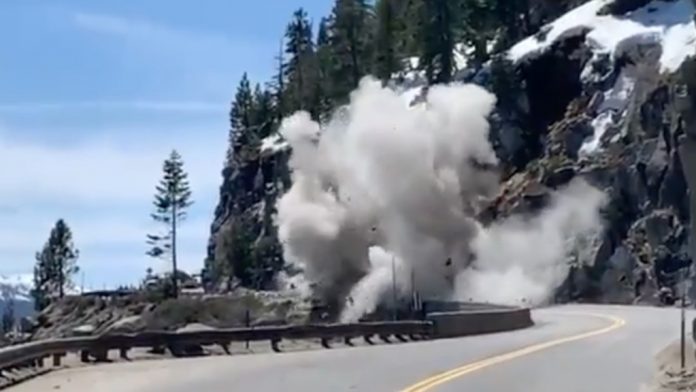 EL DORADO COUNTY (CBS13) — The latest on the rockslide near Echo Summit:

Caltrans says all lanes on Highway 50 have reopened near Echo Summit after crews removed boulders that fell to the roadway during a rockslide.

Caltrans says Highway 50 is back open to one lane around Echo Summit.

Crews are continuing to work on removing rocks from the area, however. Caltrans says they will monitor the area through the weekend to make sure it is safe.

Highway 50 is back open to one lane over Echo Summit. Rock scaling work continues and our crews will monitor 24/7 through weekend to make sure the route is safe for travel. @CHPSouthLake @CHPPlacerville https://t.co/PyPkdVgsGK

As of noon on Friday, both directions of Highway 50 near Echo Summit remain closed.

Crews are now busy rigging up the bigger boulders with explosives to clear the road.

Caltrans still doesn’t have an estimated time of reopening, but crews are still hopeful they’ll be able to get at least one lane open by Friday afternoon.

Boulder blasting to clear the rock slide on Highway 50 just east of Echo Summit. The highway remains closed. We hope to open up one lane to traffic this afternoon when it’s safe to do so. ⁦@CHPSouthLake⁩ ⁦@CHPPlacerville⁩ pic.twitter.com/bIhOun1225

Caltrans crews are busy cleaning up the boulders that fell onto Highway 50.

No estimated time of reopening has been given yet, but Caltrans says they’re hopeful at least one lane will be open by the afternoon.

In the meantime, detours are in place.

Further, according to the City of South Lake Tahoe, Johnson Pass Road has also been opened as an alternate route. However, this road is steep and will not relieve much traffic.

A rockslide has Highway 50 closed near Echo Summit on Friday morning. This SUV crashed into the boulders just after the rockslide happened. (Credit: CHP South Lake Tahoe)

No injuries have been reported, but an SUV did crash into the boulders that slid onto the roadway just after the slide.

Both eastbound and westbound lanes are closed due to the slide.

Caltrans doesn’t have an estimated time of reopening at this point.

What are the legal implications of Trump Jr.'s emails and meeting?

Florida opens shelters for those who choose to ride out Hurricane...