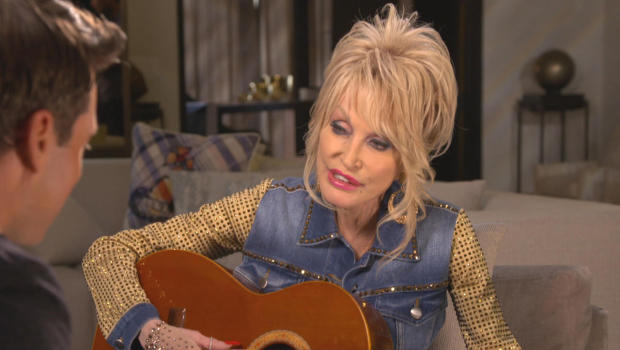 We've all been singing along with Dolly Parton for decades. But if you want to know the truth about her, know this: She works way more than just 9 to 5. Even with a half-century of music behind her, the glitzy, big-haired queen of country glamour is still at it 24/7, still writing her a legacy one song at a time.

"That's my therapy; my little guitar's my friend," she told correspondent Tony Dokoupil. "And when I'm in that zone – I call it my 'God zone' – I just love that time."

"Sit on your pile of money and awards?"

"I could never do that. I don't care. I always count my blessings, more than I count my money. I don't work for money, never did. It was the art, it was the job. I loved the work. And I've done well, and I'm thankful for it."

Dolly is open about nearly everything, including her cosmetic surgery. But as she sings in her song "Backwoods Barbie" ("I'm just a backwoods Barbie in a pushup bra and hells"), don't be fooled by thinking that the goods are not all there.

She told Dokoupil, "It is true that I look artificial, but I believe that I'm totally real. My look is really based on a country girl's idea of glam. I wasn't naturally pretty, so I make the most of anything I've got."

"Hold on a second: You were not naturally pretty?" asked Dokoupil.

"I've seen the pictures, Dolly. I'm sorry, I have to disagree with that."

"Well, you should've seen me this morning before I got ready to see you!" she laughed. "But I'm serious, though. I'm not, like, a natural beauty. But I can enhance it. Whatever it takes, I do. I try to make the most of everything."

It's hard to argue with the results.

If you need a reminder, Parton has sold more than 100 million albums, won a shelf-full of Grammys, and written thousands of songs, including "I Will Always Love You," which was a 1974 hit for Parton – and a 1992 sensation for Whitney Houston, in the film "The Bodyguard."

Dokoupil asked, "Does it ever bother you that people think that's Whitney Houston's song?"

It's a good line, and Parton is full of 'em, like, "It costs a lot to look this cheap."

Or, "How do you want people to remember you 100 years from now?"

Humor was a help where Parton grew up, the fourth of 12 children in rural Tennessee. "I wrote a song years ago called 'In the Good Old Days When Times Were Bad,' and it said, 'No amount of money could buy from me the memories that I have of then. But no amount of money could pay me to go back and live through it again.'"

Music made everything a little brighter.

"When I started writing these songs, my mom was real impressed with how I could write, writing these songs at such an early age," she said. "And she would say, 'Oh honey, go get that guitar. I want you to sing them.' And she'd say to people, 'I want you to hear this song this little thing wrote.' And so I thought, ooh, I'm getting a whole lot of attention now! So, I think that kind of encouraged it.

Dokoupil asked, "How early did you realize this was more than just a dream, this is going to be my profession, this is a job?"

"I guess I was about ten years old, the first time that my uncle took me to sing in front of an audience. And it was when they kept clappin' and clappin' after I had finished my song, that I thought that, you know, I felt something. I was scared, I was nervous, I'm a country little kid. But when I got that applause and got that feeling, is when I thought this is what I think I'm gonna do."

She moved to Nashville, and soon she was singing before a national audience on "The Porter Wagoner Show." One night after a performance she met a young fan: "I remember this little redheaded girl with green eyes, prettiest little thing, and I said, 'Well, what's your name?' And she said, 'Jolene.' I said, 'I love that name.' All the way back to the bus I was [singing], 'Jolene, Jolene, Jolene,' so I wouldn't forget the name."

She gave the name to another redhead she knew – a bank teller who flirted with her husband, Carl:

But as she jumped from country to pop to Hollywood, the couple never did get around to having children. Is that a regret? "No, absolutely not," she said. "It wasn't meant to be. And I don't regret it. I never regretted it. I mean, it was a choice. So, you make your choices, you make your sacrifices, and I never looked back. I knew early on that I was gonna walk that road 'til God told me to stop. And I'm still walking it, and He ain't said nothing to me about quittin' yet!"

In fact, she's going back for more, including a sequel to her classic 1980 film, "9 to 5." Her character, Doralee, got the best of an abusive male boss, and in the eyes of some became a feminist hero.

Dokoupil asked, "Is that a word, feminist, that you apply to yourself?"

"Well, I guess I am. But I don't think of it like they do. I'm just, I'm a feminine girl. I'm a workin' girl. I think we all should be treated with respect. And if we do a good job, we should get paid for it. So, I'm all about that."

Dolly Parton has written more than 3,000 songs, and she says her favorite is "A Coat of Many Colors," a story of a poor kid from the Great Smoky Mountains who learned early on what really matters. 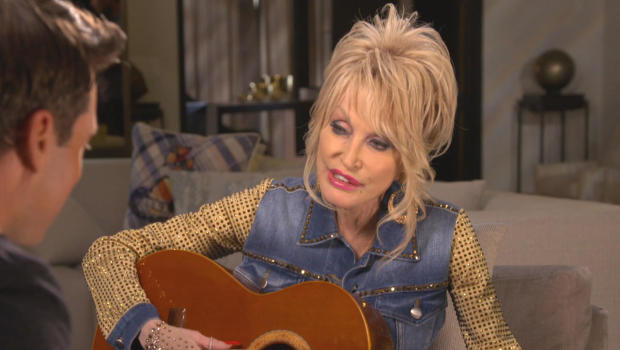 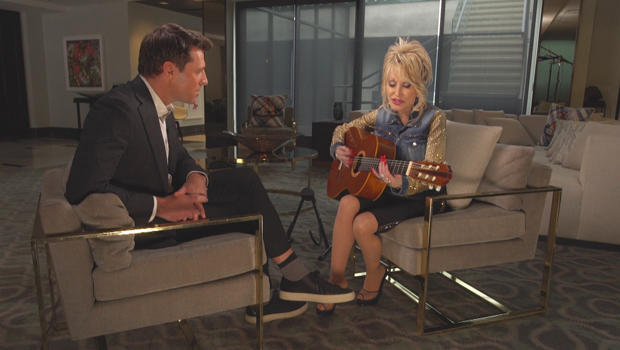 VA secretary on addressing the needs of female veterans