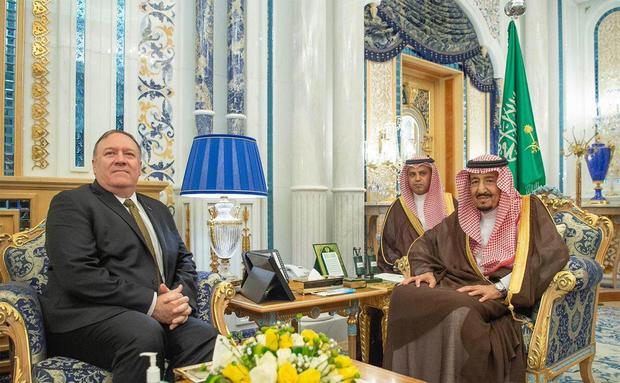 CBS News June 24, 2019, 7:08 AM Iran faces new U.S. sanctions, says it could shoot down another drone as standoff with Trump admin. deepens

President Trump planned to unveil new sanctions against Iran on Monday as the U.S. and Iran traded more threats of military action. The tension could reach a new high with the expected sanctions, the latest response from Washington to Iran's shooting down of a U.S. spy drone. Iran insists the drone and an accompanying U.S. manned military plane violated its airspace, but the Pentagon says the aircraft remained over international waters.

Over the weekend President Trump said he wants to talk to Iran's leaders, but he also threatened "obliteration" of the country if it does come to war.

The White House did not release specific details of the new sanctions in advance, but they are expected to target the elite Revolutionary Guard military unit, accused of shooting down the U.S. drone, and Iran's atomic agency.

CBS News correspondent Ben Tracy says Mr. Trump has yet to draw clear red lines as to what might prompt him to take military action against Iran. The president is giving himself a lot of room to maneuver, but he's stressed that if Iran had killed any U.S. service members when it shot down the drone, his response would have been different.

Meanwhile, he's continued to talk tough. "I'm not looking for war, and if there is, it'll be obliteration like you've never seen before," the president said over the weekend.

Mr. Trump likes to taunt, but says he actually prefers to talk. He's offered to meet Iran's supreme leader without preconditions, except for one: "You can't have nuclear weapons," Mr. Trump said, addressing the Iranian leadership. "And if you want to talk about it, good. Otherwise you can live in a shattered economy for a long time to come." The Iranians insist they are not and never have sought to develop nuclear weapons, claiming their nuclear program is entirely for civilian purposes.

While he called off a military strike last week, CBS News has learned that Mr. Trump did approve a cyberstrike on Iranian computer systems used to control the country's rocket and missile launchers. Mr. Trump has acknowledged that some people in his administration want a tougher response, including his National Security Adviser John Bolton.

Bolton issued his own warning on Sunday alluding to the aborted military strike. "Neither Iran nor any other hostile actor should mistake U.S. prudence and discretion for weakness," he said.

Iran has been frustrated by Mr. Trump's unilateral move last year to pull the U.S. out of the 2015 nuclear deal negotiated by his predecessor, President Barack Obama, and has vowed to increase its stockpile of enriched uranium. The Islamic Republic could exceed the limits set under the terms of the deal as soon as this week. That would see the deal officially unravel, and put Iran on a much shorter path to a possible nuclear weapons capability.

U.S. allies have urged Iran to stick to the deal, and Russia has offered to build a financial mechanism that would allow Iran to keep trading its oil, in effect evading U.S. sanctions, if Tehran adheres to the 2015 agreement. Russia on Monday said any new sanctions imposed by Washington against Iran would be "illegal." Moscow has backed Iranian complaints that the Trump administration's re-imposition of sanctions, without backing from the U.N., amounts to economic "war" against Iran.

With animosity between Washington and Tehran mounting fast, the Trump administration has continued lobbying allies and foes to further isolate the Iranian regime to try and force it back to the negotiating table. Iran's leaders have ruled out any talks with the White House unless the crippling sanctions Mr. Trump re-imposed are lifted first.

Tehran said on Monday that the cyberattack on its computer systems was unsuccessful, and claimed any new sanctions would have "no impact" on its policy.

The commander of Iran's navy, meanwhile, warned that Tehran is capable of shooting down another U.S. spy drone. "We confidently say that the crushing response can always be repeated, and the enemy knows it," Rear Adm. Hossein Khanzadi was quoted as saying by Iran's state-run media on Monday.

Secretary of State Mike Pompeo arrived Monday in Saudi Arabia, Iran's the regional arch-rival and a key American ally when it comes to countering Iranian influence in the region.

"The president has said repeatedly we want a brighter future for the people of the Islamic Republic of Iran," Pompeo said before departing for meetings with King Salman and his heir Crown Prince Mohammed bin Salman.

He reiterated the administration's openness to talks with the Iranian leadership, but the White House's strategy is unclear, besides trying to strangle Iran's economy with sanctions in hopes of getting a better nuclear deal.

Saudi Arabia's top diplomat warned, meanwhile, that Iran would "pay the price" if it continued its "aggressive polices," while insisting that the kingdom wanted to avoid war.

"Today, Iran is under severe economic sanctions," Adel al-Jubeir told French newspaper Le Monde in an interview published just as Pompeo arrived in his country. "These sanctions will be strengthened. If Iran continues its aggressive policies, it will have to pay the price."

Democrats in Washington argue that just because Mr. Trump backed off the military strike, it doesn't mean he should be praised for a conflict they say he created by walking away from the nuclear deal in the first place. 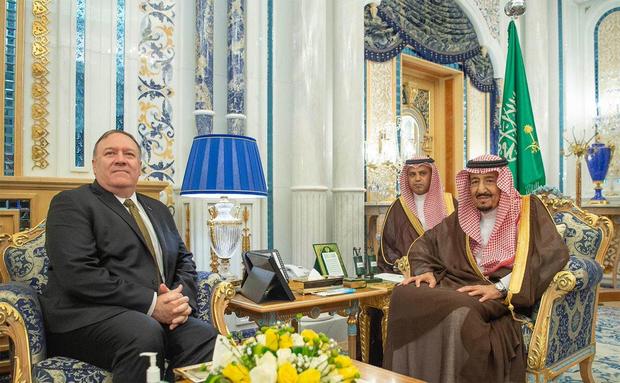 Fauci says “dark winter” can be avoided if more are vaccinated