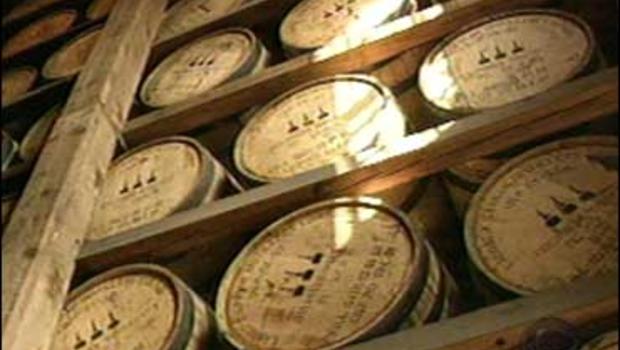 High spirits come aged in casks of oak – at least in the Bluegrass State of Kentucky they do. How those spirits come to be is Martha Teichner's story to tell:

Would you believe this "moosh" is the makings of bourbon? Kevin Smith excitedly pointed to the fermenting mass: "It almost looks like there's somethin' comin' up out of there, like a monster."

Actually, it's yeast doing its thing on corn, wheat, and malted barley.

"Stick your fingers down in there," Smith instructed. "Now taste it; it's gettin' a little sour."

Smith is master distiller at Maker's Mark, the bourbon this will be in six years or so, when bottles of the finished product head for their famous dip in red sealing wax at a rate of a hundred per minute.

Fact: Bourbon is the only uniquely American whisky. It doesn't have to be made in Kentucky, but 95% of it is. Why? Because much of the state sits on a shelf of limestone, and the water that filters through that limestone is pure and iron-free – perfect for bourbon production.

Bill Samuels, Jr. is president of Maker's Mark and a seventh-generation bourbon distiller. He showed us what may be the oldest bottle of unopened bourbon anywhere. "This would have been sometime in the 1870s," he said.

And another bottle with a tale to tell: "My grandfather made this one, which is the last bottle that we did going into Prohibition, and he signed it."

During Prohibition, Americans drank bootlegged, imported booze. The only bourbon available was sold by pharmacies, by prescription (supposedly "for medicinal purposes").

"You had to bribe the doctor with $5 to write the prescription, and then $5 to the pharmacist for filling it, and then you paid $5 for the pint of whisky," Samuels said.

Prohibition finally ended on December 5, 1933, seventy five years ago next week. People partied in the streets.

But it would be years before distillers could make and age enough bourbon to sell – most of it awful stuff, according to Bill Samuels.

"My grandmother described it better than I ever could," he told Teichner. "She said one time to my grandfather and to Colonel Beam that it blew her ears off."

But in 1953, Samuels' father bought himself a small distillery and set out to make a better bourbon. There's even a replica of the kitchen where his mother, Margie Samuels, designed the bottle and thought up the name, inspired by the identifying marks on pieces in her collection of old pewter.

"And so she thought 'Maker's Mark' was perfect," Samuels said, "if you're proud enough of what you're doing to put your mark on your product.

The red sealing wax was her idea, too:

"She took our deep fryer from the kitchen, and that was the last fried fish and French fries we had at home for about a year and a half."

Maker's Mark went on the market in 1958. It was practically unheard of outside Kentucky, until a front page story in the Wall Street Journal in 1980, overnight, made it a national brand.

Since then, Kentucky bourbon has become a growth industry. Production has doubled since 1999, to nearly a million barrels a year.

Kevin Smith described a fully mature sample of Maker's Mark: "I pick up those oaky vanilla notes, kind of a toffee flavor. This is when we know we've kinda hit the peak, the ultimate taste profile of Maker's Mark."

What exactly is bourbon? By law, it has to be at least 51% Corn. Maker's Mark is 70%. The rest will be a blend of malted barley, wheat, or more likely rye.

Coming off the still, it's called white dog. It's clear, and it bites.

Next, it has to go into new American oak barrels. Each barrel is made by hand, and here's the amazing part to watch: They have to be charred, literally set on fire inside.

"First thing you do when you hold up a bottle of bourbon is you see that nice caramel color. That came from the barrel."

What happens to those barrels once they're emptied? Here's a delicious little irony: Most of them are sent to Scotland and used again.

So with every sip of some fine old scotch, you're likely drinking a little bit of bourbon.

For some ideas on cooking with bourbon click here for recipes. 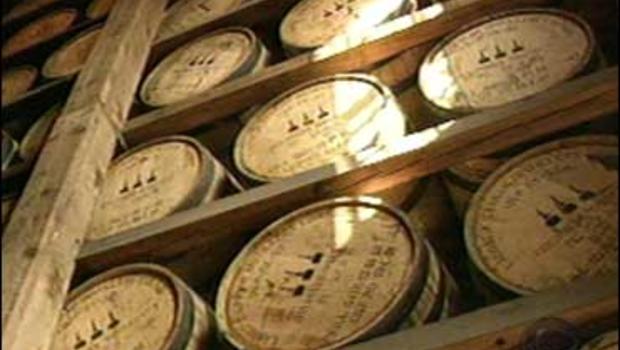 Refugee advocates call for Silicon Valley to “leverage the technology”