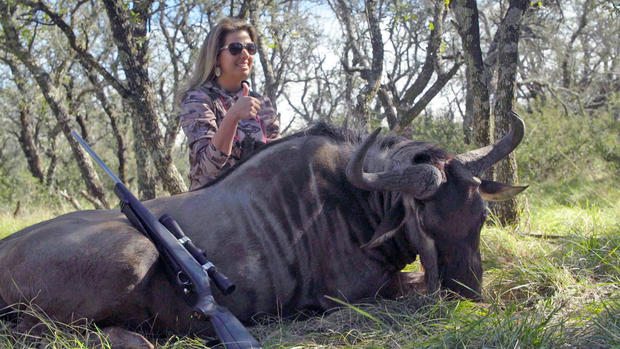 Watch the CBSN Originals documentary, "Trophy Hunting: Killing or Conservation?" in the video player above. The full hour special premieres on CBSN Sunday, June 9, at 8 p.m., 11 p.m. and 2 a.m. ET.

El Dorado, Texas — The evening before their wildebeest hunt was set to start, Tess Talley and her husband Andrew arrived at the 5 Star Outfitters hunting ranch later than planned. They had driven more slowly for the final stretch of their six-hour drive from Dallas; as darkness fell, they worried about hitting deer.

"We've gotten to know Koby from our last time here," Talley said of ranch owner Koby Howell. Talley, an avid trophy hunter from Kentucky who now lives in Texas, became infamous when a picture she posted of a giraffe she killed in South Africa went viral in June 2018. She still receives death threats.

The Talleys were met with hugs and a couple of beers by Koby Howell and his wife Amber. They referred to their guests as "good people, and good friends."

5 Star Outfitters is one of the many hundreds of hunting ranches in Texas that stock their grounds with exotic animals like the wildebeest. There's no official count, but some estimates place the number of such ranches in the thousands. According to the Texas Parks and Wildlife Department, which has oversight over hunts in the state, an exotic animal is defined as any animal that is not indigenous to Texas. Texas is the epicenter of the exotic animal industry in the U.S.

Howell, who owns two ranches and leases an additional three, says he currently has 10 different species of exotics, about 100 animals in total, between 5 Star and one other ranch. Here, they roam the 35,000 acres enclosed by a fence.

"I couldn't even tell you how many people raise exotics in Texas — hundreds, tons," Howell told CBS News. He explained that he couldn't "name names" or give specifics about ranches and breeders, as there is no official overview of the industry. It's almost entirely privately-run, with some permitting required by the Texas Parks and Wildlife Department, as well as the Fish and Wildlife Service and the U.S. Department of Agriculture. The USDA mandates all Texas breeders and dealer of exotics, as well as auctioneers, have operating licenses. The industry falls under the federal Animal Welfare Act, but critics have noted that implementing regulations is not straightforward.

"The domestic wildlife trade is the dirty underbelly of trophy hunting industry," said Kitty Block, CEO of the Humane Society of the United States, an animal welfare group that opposes the practice. Block described the hunting of exotics in the U.S. as canned hunts, motivated by the desire to obtain a so-called trophy.

"Animals are fenced-in, hand-reared, hand-fed, and they're baited so food is out when hunters come," Block told CBS News. "Hunters are then driven up to the area where animal is eating and they're shot there."

She expressed other doubts about what goes on at the ranches: "What are they actually breeding? Are they even from Africa?"

Most people associate the multi-billion-dollar exotic animal industry in the U.S. with the exotic pet trade; but the breeding and hunting of big-game exotics, mostly from the African continent, are a large part of this financially lucrative operation. It's referred to by industry participants and experts as "conservation through commerce." According to the most recent study of the industry, done in 2007 by Texas A&M University, it supports at least 14,383 jobs, and there's a growing marketplace.

"Value comes from the ability to freely trade and sell, and buy from other breeders," said Charly Seale, a rancher and executive director of the Exotics Wildlife Association (EWA), the largest and oldest pro-hunting group that promotes the exotic wildlife trade in the U.S. The EWA was established in 1967 and currently has 2,700 fee-paying members, who subscribe to the idea that without breeders and hunters, exotic wildlife would suffer. For them, hunting is a wildlife population management tool.

As long as ranchers in the nation's top cattle-raising state continue to transform farmland into something resembling an African safari, trophy hunters like Talley are able to pay top-dollar fees to keep this industry running. Wildebeest hunts, like the one the Talleys purchased, average $4,000.

"A rancher is a small-business person, and they have to make a profit," said Seale. "The animals on their ranch need to be profitable, otherwise they're not going to stay on their ranch very long — because we can't keep animals that don't have an income."

The trade can be traced back to the 1940s, when fluctuating domestic livestock prices and the severe Texas drought drove many ranchers to abandon and sell their land. During that time, zoos also began selling and giving away animals. According to Seale, exotics quickly began to fill a financial void for ranchers, becoming so lucrative for some that they even switched from an inventory of domestic livestock to exotics.

Smaller ranches like 5 Star, as well as bigger ones like Jeff Rann's 777 Ranch, get virtually all their animals now from U.S. breeders; animals are no longer imported from foreign countries.

"The goal now is to repopulate the species back to their countries of origin," Rann, a veteran hunter and proponent of the "conservation through commerce" model, told CBS News. Yet there is virtually no track record of this practice or its effectiveness. According to Rann, the times his ranch has sent animals to habitats in Africa, it's been brokered by the pro-hunting policy and lobbying group Conservation Force.

The Exotics Wildlife Association website even boasts a proposal to African governments to bring specimens of the critically endangered rhino to Texas; it claims that the group is "working out the details of the arrangement."

Most ranchers begin growing their exotic herds through breeding a couple of years after introducing the species onto their land. Live auctions were commonplace, although industry insiders like Rann claim there is a push to move away from this.

"There isn't a list of breeders or ranches as such," said Howell. "But everybody's open to trading, so to speak, with their animals."

The federal government, specifically the U.S. Fish and Wildlife Service, keeps track of the industry insofar as it issues permits under several domestic and international laws and treaties, such as the Endangered Species Act, the Marine Mammal Protection Act, and the Wild Bird Conservation Act; as well as treaties such as the Convention on International Trade of Endangered Species of Wild Fauna and Flora. These laws are intended to protect wildlife against threats such as habitat loss.

A Texas Parks and Wildlife statute prohibits attempts to kill or injure certain dangerous wildlife held in captivity. Much of the current debate centers on the idea of what constitutes "dangerous wild animals" and how they're regulated. Since 2001, 19 species, including lions, tigers, and gorillas, have to either be recorded onto a state registry, or owners face an outright ban.

"If we continue doing what Texas is doing, herds will continue to grow," said Howell, adding that although they're "not yet as common as beef," exotics are a "great source of food," with growing popularity. Virtually no data exists to track how many people live off the meat derived from hunting exotic animals. Howell told CBS that in the past five months he personally fed 15 to 25 families.

After Tess Talley killed her wildebeest on Howell's ranch, she and her husband said they planned to add the meat to their "freezer full of exotic game."

"We're looking forward to trying out recipes, you know, on the grill," said Talley.

But animal rights groups dismiss the rationale that these animals are hunted to provide sustenance.

"They're not hunting to eat, they're hunting these animals for trophies," said Block, of the Humane Society. "All the animals in the exotics are trade are bred simply to be shot." 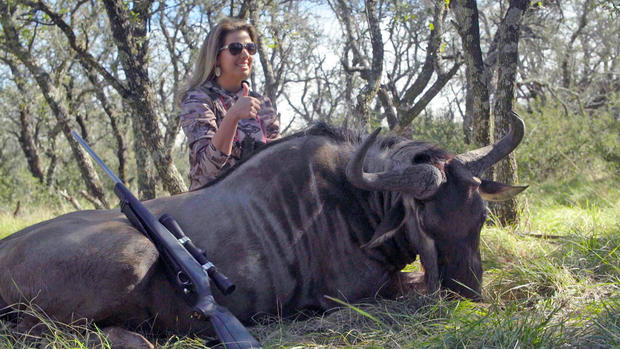