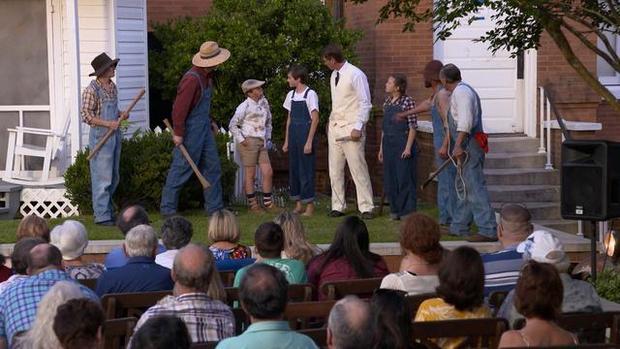 Monroeville, Alabama — Aaron Sorkin's Broadway adaptation of the 1960 novel "To Kill a Mockingbird" is not only nominated for nine Tony awards Sunday night — it also recently became the highest-grossing play in Broadway history. But in Monroeville, Alabama, another special stage version of Harper Lee's novel just finished a limited run.

Harper Lee set "To Kill a Mockingbird" in a slightly fictionalized version of Monroeville, which is her hometown. It's a long way from Broadway – 1,100 miles in fact – and hours away from the nearest airport. But each year, fans flock there each year to experience her work in truly novel ways. Home to 6,500, Monroeville is filled with signs of its favorite daughter.

"To be able to come in, and just experience the rural community feel here, it really means a lot to people," said Will Ruzic, the executive director of development for the region.

One of the biggest engines of growth in Monroeville happens over a short five-week stretch each spring, as visitors flock to Monroeville for a one-of-a-kind experience: a live performance of "To Kill a Mockingbird." The play, based on Lee's novel, is put on by people from the community.

"This is something we rely on. It's a tremendous tourist attraction, always has been for years," Ruzic said. He added that he originally laughed it off when he was asked to play small town lawyer Atticus Finch.

"Having never been on stage, you don't just take on one of the most iconic roles in American literature," he said.

Kathy McCoy, who came back to guest direct the play this season after serving as director for the first 16 years, described Monroeville on a production day as a "three-ring circus." Before overseeing one of America's most revered stories, McCoy worked as the museum director in the courthouse where Harper Lee's father practiced law.

"We were raising money to restore the old courthouse," she said. One day, I sat here and I thought, why don't we just, maybe, try to cast some folks from around here, create a community theater? And we can do it in this courtroom."

Over nearly three decades, McCoy has taken the play from Monroeville to stages across the globe. It's given the storied town a chance to write a new chapter: Like many, Monroeville was hit hard by the exodus of manufacturing jobs in the 1990s.

"It's been a huge impact. Hundreds of thousands of dollars a year because of this play. Tourists come from all over the world," said Penelope Hines, who's on the town's Chamber of Commerce. Just this season, Hines said, tourists came from places like Australia, Japan, and China.

The jury presiding over Robinson's trial is selected from the audience before each performance. "When I first directed this play in '91, the script did not call for a jury at all," McCoy said, adding "And I'm like, 'Well, I would like to take a jury out of that audience and have them feel what it's like — to be on a jury that convicts an innocent black man.'"

It seems everyone who's lived long enough in Monroeville has a story about Harper Lee, who most knew as Miss Nell. That includes Dott Bradley, who's been part of the cast from day one.

"When we were in Israel, I was watching the jury and several of the guys had water in their eyes. They was crying," Bradley said. "When the play was over, he said, 'I'm so sorry for what happened.' And I told him, 'Sir, you do not have to apologize for what happened then.' No, we can't do anything about the past. But we can do something about now and the future."

While Jeff Daniels leads the cast of Broadway's record-setting play, the Monroeville performers make an impact of their own, way off Broadway.

"Probably one of my favorite parts of the show is afterwards […] we will have people crying," Ruzic said. "You know, and inevitably, every single audience has an English teacher in it. Typically she'll have two or three of her students. And they'll refer to her as the crazy mockingbird lady. And she'll just be standing there crying, 'cause she's actually in the courthouse, and– and has experienced this emotional rollercoaster."

"This book and this play teach respect," Bradley added. "If you respect one another, then we can go forward." 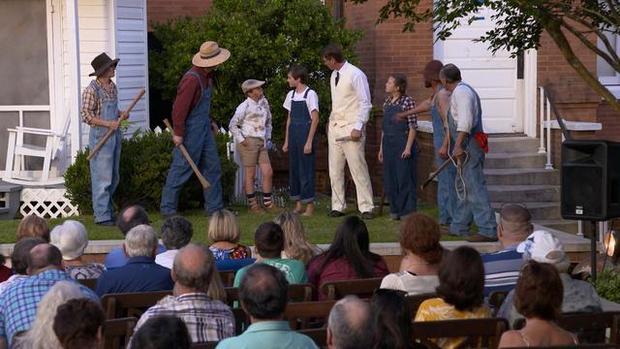 A trip to the original “Mayberry”