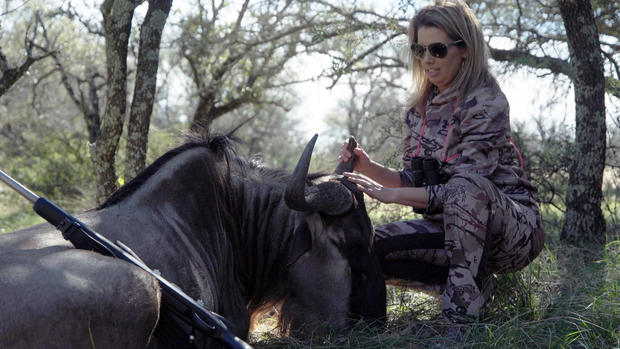 Watch the CBSN Originals documentary, "Trophy Hunting: Killing or Conservation?" in the video player above. The full hour special premieres on CBSN Sunday, June 9, at 8 p.m., 11 p.m. and 2 a.m. ET.

El Dorado, Texas — One windy morning in late January, Kobe Howell pointed out the wildebeest in the distance to his trophy hunting client, Tess Talley. They had been tracking the exotic animal for a couple of hours at 5 Star Outfitters, the 35,000 acre hunting ranch Howell runs and lives adjacent to.

"It's that big black spot right over there — see him?" Howell said to Talley, and helped her set up her shot. They high-fived as the animal went down with what they referred to as a "clean" shot — a bullet to the shoulder.

"They don't go down easy all the time," said Talley as she approached the animal and began to pose him for the so-called trophy photo. Not long ago, a photo like this one made Talley infamous, and turned her life upside down.

In 2017 Talley hunted a giraffe in South Africa as part of a trophy hunting safari trip, and the picture she subsequently posted on Facebook went viral. Celebrities went after her and public outrage has plagued her since.

"It's been hell. I have encountered cameras at my work, I've received mail at my home, text messages," Talley said. That morning in Texas, a year and a half after her viral photo with the giraffe, several new death threats arrived on her social media message feeds. One read: "Watch your back, the hunt is on. I know where you are, and I'm coming for you."

Social media has brought fresh scrutiny to the centuries-old practice of trophy hunting. At a time when U.N. experts warn one million species face risk of extinction, and threats such as human encroachment, poaching, and climate change are mounting, the global conservation community is grappling with the role of trophy hunting in wildlife management. Trophy hunting advocates say that contrary to what you might think, their activities actually help ensure the long-term survival of species.

"Unfortunately there's a mischaracterization of what hunters do and hunters support," Corey Mason, executive director of the pro-hunting organization the Dallas Safari Club, told CBS News. "I would argue that Dallas Safari Club has funded more conservation projects than probably, you know, most of them combined that are non-hunting or anti-hunting."

Around 80% of all trophy hunters worldwide are Americans. In 2017 alone, 650,000 animal "trophies" were imported into the U.S. Industry revenues are estimated to be in the hundreds of millions of dollars.

"When you go on a hunt, there's different fees that come from that," said Mason. "If it pays, it stays."

"If it pays, it stays" is a controversial concept among conservation circles. Proponents among the hunting community argue that placing a monetary value on an individual animal incentivizes the safeguarding of the species and habitat. But animal rights groups say commerce is not the answer.

"It's important to have wild animals thrive, but why is the price of that this needless slaughter of these animals for their parts?" Kitty Block, CEO of the Humane Society, told CBS News. "It diminishes what wildlife is. If they can be reduced to a chair, to a knife handle — that's no trade-off."

Trophy hunts occur in at least 63 countries. Over one-third of them are on the African continent, where places like Zimbabwe have long been popular destinations for American hunters. One of Zimbabwe's largest privately-run reserves, Bubye Valley Conservancy, says its wildlife is thriving thanks to the "if it pays, it stays" model.

Until the 1990s Bubye was a cattle ranch. The wildlife species brought in have since multiplied under the management of Bubye staff, and now the reserve boasts robust populations of all kinds of wildlife, even vulnerable species. Animals here include the so-called Big Five of African game: lion, elephants, cape buffalo, leopard, and rhino.

According to Bubye manager Blondie Latham, 80% of the reserve's operational costs are covered by trophy hunting, including their in-house anti-poaching task force. The task force, which was established to protect the reserve's population of the critically endangered black rhino, costs over $750,000 to run each year. Not all animals at Bubye can be hunted, and the black rhino is off limits.

"We currently need more hunting," Bryan Gurney, the head of the Bubye anti-poaching task force, told CBS News. A former high-ranking officer in the British army, Gurney said that as poaching syndicates are growing stronger, his unit needs more money to keep up its protection of the rhino. There are only around 5,000 black rhino remaining in the world, and Zimbabwe has the fourth highest population.

Latham told CBS that there are over 40 000 animals on the reserve, and 31 species that are on the so-called huntable quota. Quotas are set by governments in countries where trophy hunting occurs, and typically around 3% of species' population can be hunted.

But non-hunting and anti-hunting groups argue that wildlife does not need to be lethally managed. They also take issue with the fact that Bubye is enclosed by almost 300 miles of electrified fencing.

"You want to see wildlife thriving in the wild, you want to see them thrive and survive on their own, not naturally selected out because of their horns or anything else," said Block, of the Humane Society. "Everyone assumes wildlife is going to be there for future generations. It's not something we can just assume is gonna be all right. It's not."

The debate comes at a time when the survival of many iconic species appears to be in jeopardy. Elephant populations are down to just 10% of their robust numbers a century ago. According to the Great Elephant Census of 2016, in Africa only 350,000 elephants remain, and they're decreasing at an average rate of 8% a year, except in protected areas, including reserves like Bubye.

Most conservation experts agree that habitat loss stemming from human encroachment is the greatest threat to wildlife, not hunters. And not all agree that the benefits of trophy hunting revenue are worth it.

"Of the eight African nations that we surveyed, the tourism dollars coming in was about $17 billion. Only less than 1% of that was money that was collected from trophy hunting," said Block. On the other hand, she said, "Ecotourism pays, ecotourism should stay." 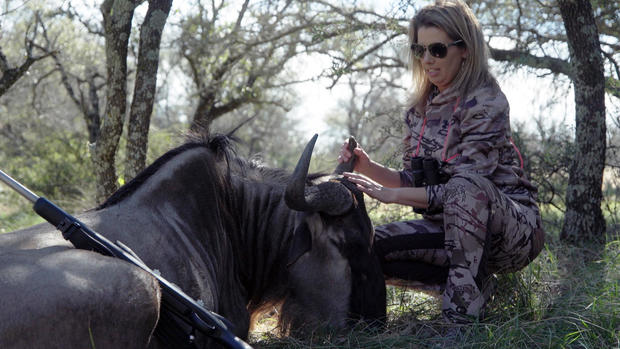 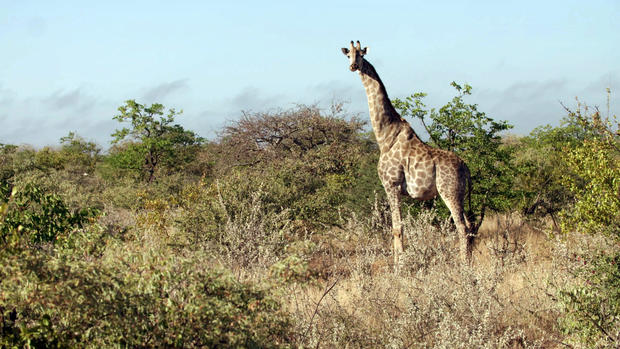 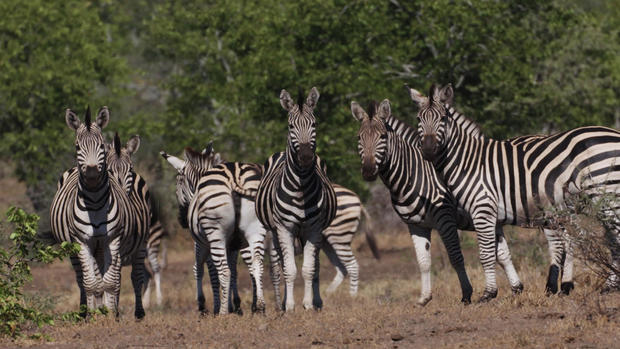 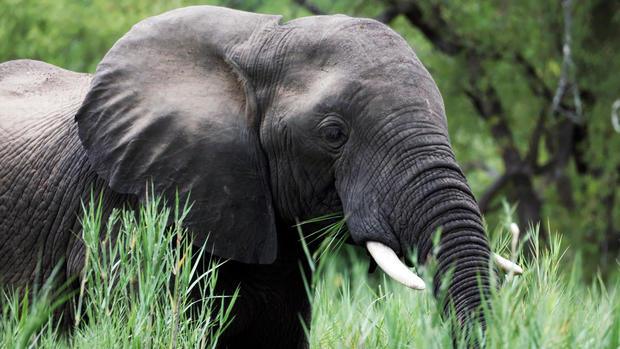 A third of small businesses have reinstated COVID-19 rules

Partisan claims fly as lawmakers face off over the debt ceiling