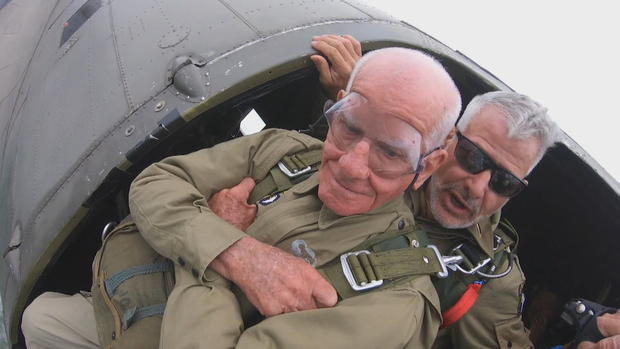 Normandy, France — Tom Rice, 97, has been to Normandy before, but the reception then was a lot less welcoming. Seventy-five years ago, he was part of the vanguard of the D-Day invasion, and he was among the 18,000 paratroopers who would be dropped behind enemy lines.

Their job was to prevent German reinforcements from reaching the front as the main invasion force stormed the beaches.

"Chase 'em out, run 'em across fields, through cemeteries, jumping over tombstones, chase 'em all the way back to the German border as fast as we can," Rice said.

He has come back to the field where he landed that night. The story he now tells to current soldiers is of a mission that didn't start well.

"It was dark, dark, dark. Apart from all the hurricane of all that fire coming up real bad. I'm glad they moved away from that," he said.

Rice could have just accepted the thanks of the French nation here. But he had other ideas. He came back to jump again.

"I got a replacement left knee and the right knee is a little sore. But we're going to ignore that," Rice said. "I do this because I like to and it's an extended dimension of maybe my personality."

The plan was to jump in tandem, harnessed along with Art Shaffer.

"They weren't shooting at me," Rice said. 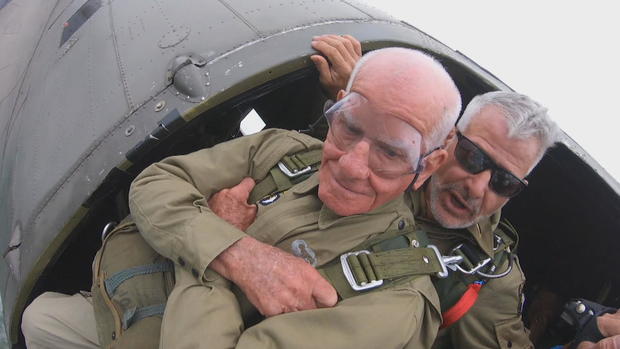 This week on “Sunday Morning” (September 19)

Researchers to study “long COVID” in thousands of survivors