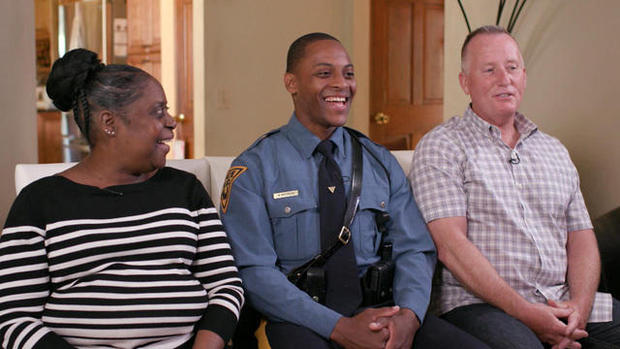 CBS News December 25, 2018, 7:24 AM "It was meant to happen": Routine traffic stop in New Jersey leads to unlikely reunion

Our series, A More Perfect Union, aims to show that what unites us as Americans is far greater than what divides us. In this installment, we share a story about a chance encounter leading to a reunion that was 27 years in the making.

With his body camera rolling, New Jersey State Trooper Michael Patterson pulled over a white BMW for a routine traffic stop. After some small talk, the man behind the wheel, retired police officer Matthew Bailly, realized they were from the same neighborhood and had crossed paths years before. The trooper's mom was key to the story.

"I was in labor and didn't realize it," Karen Patterson recounted. "Before you know it, I'm on the bed and Michael's head is crowning."

Every birthday, Michael Patterson's mother recounted the story of how a police officer helped his dad deliver him at home.

"It was years ago, it was the first baby I've delivered was that house, that's why I always remember the address," Bailly could be heard saying in Patterson's bodycam video.

"At the house?" Patterson asked.

"In the bedroom. Oh yeah, by myself," Bailly said.

"Get the hell out," Bailly said.

"That was me!" Patterson replied.

Bailly, Patterson and his mom had a chance to return to the scene of his birth 27 years later. But the reunion of the families almost didn't happen.

"I'm not thinking about 'Hey, why don't you get out of the car let's take a picture together.' That's not going through my mind as a trooper," Patterson said. "But I drove over to his house, it wasn't far from the car stop… and I wrote him a note. I left it on his door and I said, 'Sir, my name is Michael Patterson, the trooper that just stopped you… My family suggested that we take pictures together, so you know, if you don't mind, just give me a call at your earliest convenience and maybe we'll connect.'"

He got that picture and a lot more.

"I'm grateful to Mr. Bailly for coming to assist and everybody asks why I get so upset, I get upset because I honestly don't know what would have happened had they not come to my aid," Karen said, choking up. "So I just want to tell Mr. Bailly I appreciate him coming to my aid."
"It was my pleasure. Great experience," Bailly said. "I think a greater power somehow made that meeting happen and I'm not sure where it's going to take us… and I'm willing to go on the journey."

"Yeah, some people might call it serendipity. What do you call it?" CBS News' Michelle Miller asked.

Needless to say, Bailly was not ticketed. The universe seems to have wanted to bring them together for a long time. When Patterson was about 10 years old, they ran into each other in a grocery store. That meeting didn't leave much of an impression on young Patterson, but this time I think it might just last. 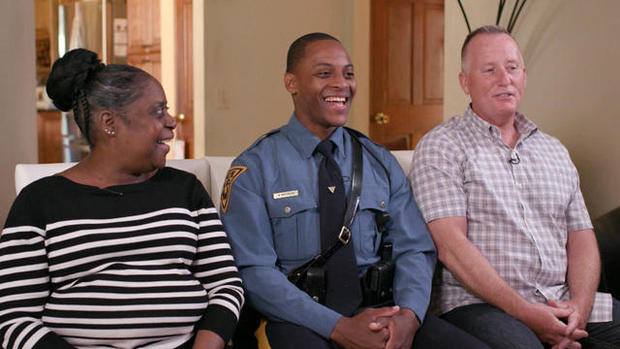 Cheney and Kinzinger criticize Republicans in wake of shooting