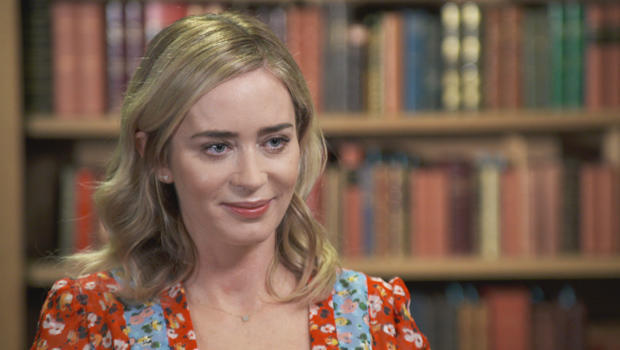 Mary Poppins always knew how to make an entrance, and her return in the new Disney musical is as magical as ever. It just took a little longer than most expected – a sequel we've waited more than half a century to see.

The children she cared for have grown, but their nanny is mostly unchanged:

Michael Banks: "Good heavens, it really is you. You hardly seem to have aged at all."
Mary Poppins: "Really, how incredibly rude."

Unchanged, except for the actress who now plays her, Emily Blunt. She described the character as a superhero.

"I think she is. But yet, what I really like about her is the great mystery" Blunt said. "She doesn't reveal her inner workings to anybody, so you have no idea who she is, where she's come from.

Blunt's Mary Poppins is a tad more tart than the Mary moviegoers first fell in love with back in 1964. But Blunt did not allow Julie Andrews' Oscar-winning performance to intimidate her.

Correspondent Anthony Mason asked, "Did you have any reservations about playing this part?"

"I have to say I was rather stunned, but I know it was an instantaneous 'yes,' because come on, it's like a once-in-a-lifetime opportunity to get to play somebody like her," said Blunt.

Blunt began to form her performance at night, while her husband, actor John Krasinski, was in an Off-Broadway play: "I would have the evenings to myself, and my oldest daughter was in bed. And I was heavily pregnant with my second daughter, and so I'd sort of waddle around the house, trying to be Mary Poppins, and try some stuff out 'til something stuck, you know?"

The actress hadn't seen the original film since she was a child, and chose not to watch it again. Instead, she went back to the original books.

"I just was completely riveted by P.L. Travers and by this sort of slightly acerbic, eccentric version of her," she said.

At the New York Public Library, Blunt and Mason were shown the first American edition of "Mary Poppins," published in 1934.

The mementos, shared by librarian Meredith Mann, were donated by the Australian-born author herself, P.L. Travers, who wrote eight Mary Poppins books.

They also have Travers' parrot-headed umbrella, and the original illustrations by Mary Shepard (daughter of Winnie the Pooh illustrator E.H. Shepard), who fought with Travers.

"They had a very contentious relationship in trying to come up with what the image of Mary Poppins would be," Mann said. They finally seized upon a wooden doll. "It gave them a common reference to draft the character around," said Mann.

And she famously loathed the first Disney film. But director Rob Marshall persuaded the Travers estate of his vision for Mary Poppins, and insisted on Blunt (with whom he'd worked on the musical "Into the Woods") for the part.

Mason asked, "Did you have any trouble convincing Disney that someone who really wasn't known as a singer could carry this film?"

"I thought of her in one second, told them, they said yes in half-a-second," Marshall replied.

"There wasn't even a question, 'cause she sings beautifully," said Marshall.

Yet Blunt sings movingly in the film to the Banks children who have lost their mother. "It's a very emotional film," said Mason.

Blunt asked, "Did you have a little weep?"

"My father cried, hard" Blunt said. "And I've seen my Dad cry one other time in my life, and that was at his father's funeral. He's terribly British and doesn't do that."

"What did you take from that?" asked Mason.

"Oh, I will remember that moment of seeing him like that on my death bed. It was completely unique and rare and very special."

"It was about the film, and probably about you, too."

"Which is pretty nice!"

Her father (an attorney) and mother (a teacher) raised Blunt in London. She's one of four children. And as a kid, she stuttered.

"Yes, and by the age of 12 it was really bad. And so I was quite quiet, because I just didn't want to speak. And it wasn't that I was lonely – I had lots of friends – but they were like, 'Why can't you say it? Just say it.'

"The person who changed my life with it was my teacher at the time, who told me to do the class play. And I said, 'No.' And he said, 'Well, do it in a silly voice. I've heard you do silly voices.' And I could speak fluently. There are so many stutterers who are actors."

In her first professional acting appearance she shared the stage with Judi Dench, in Sir Peter Hall's "The Royal Family."

"It was completely surreal," she said. "Like, unfathomably lucky debut with Dame Judi Dench, who was so nice to me."

Blunt was 18 and won the Best Newcomer Award from the London Evening Standard. Five years later she made her film breakthrough, playing a fashion editor's assistant in "The Devil Wears Prada."

This year, in the horror film, "A Quiet Place," in a harrowing scene directed by her husband, she gave birth in a bathtub while a monster approached.

She's back in the bath in "Mary Poppins Returns," but this time she's singing.

She said, "I've sort of done for bathtubs what Spielberg did for people going in the ocean. This is like the medicinal version of it. This is me trying to heal what I've done!"

Both films have generated Oscar buzz for Emily Blunt.

Mason asked, "If Mary Poppins is a superhero, most superheroes have sequels."

"Would you like to see a sequel?" Blunt asked.

"She's completely bizarre and unknowable. What I love about her is really what Travers said about her: 'In order to fly, you need something solid to take off from.' And I love that about her. Practical, yet magical." 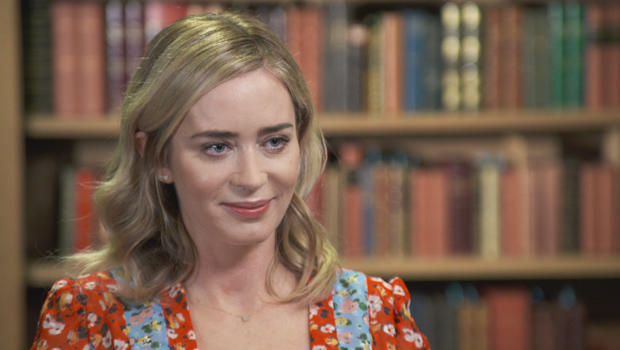 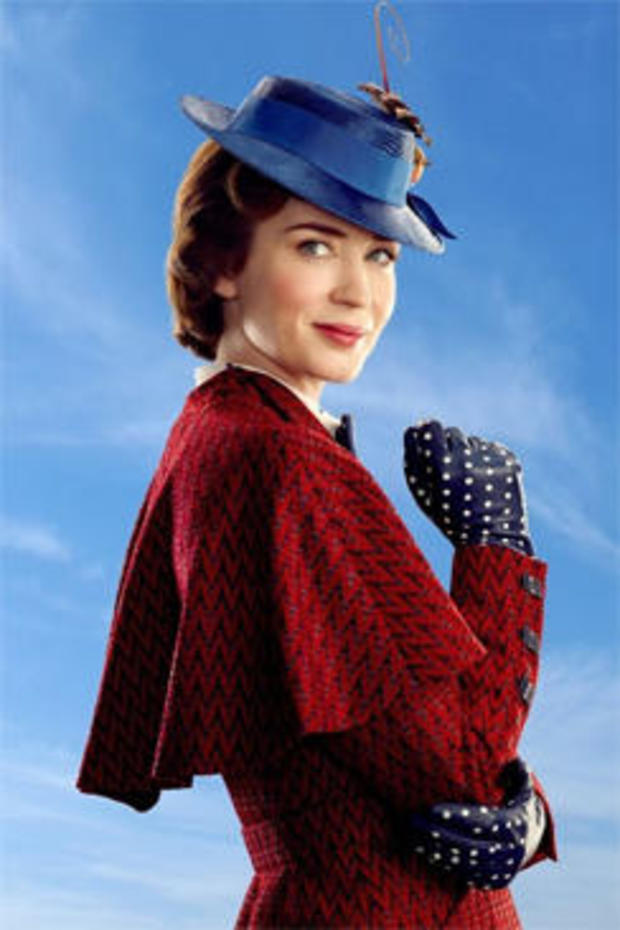 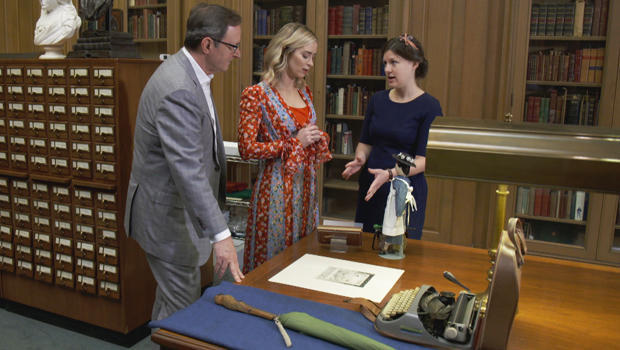 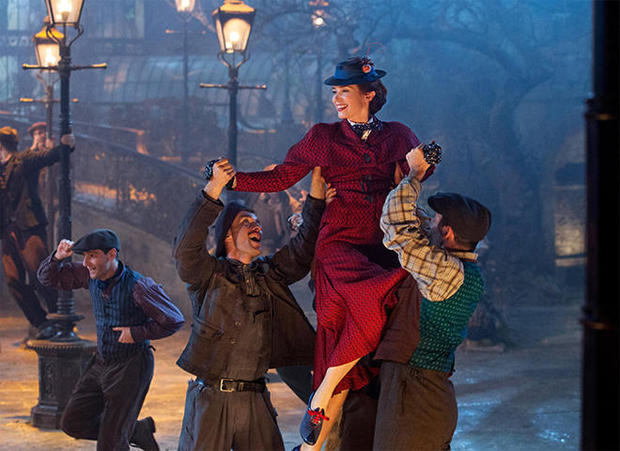 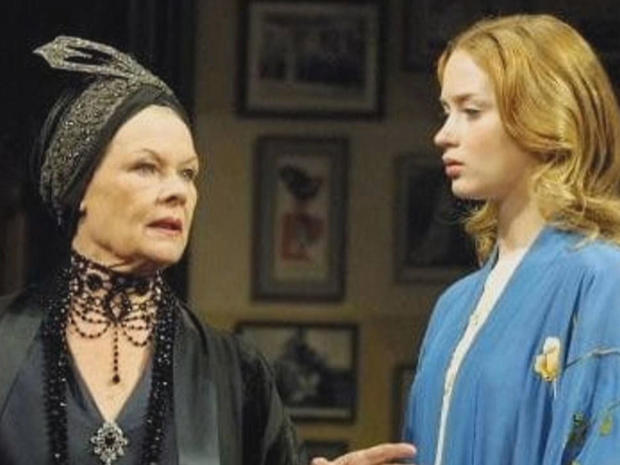