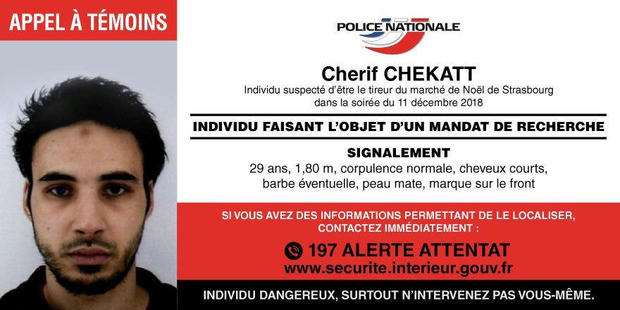 Cops trying to track down anyone who helped Strasbourg attacker

Strasbourg, France — Investigators looking into the attack in Strasbourg were trying to establish on Friday whether the main suspect had help while on the run, as the death toll climbed to four and the French city tried to return to the small joys of the festive season. Paris prosecutor Remy Heitz, who handles terror cases throughout France, told a news conference that seven people were in police custody, including four family members of Cherif Chekatt and two who were detained on Thursday night.

Chekatt, a 29-year-old Strasbourg native, was shot dead Thursday during a police operation in the Neudorf neighborhood of the city.

"We want to reconstruct the past 48 hours in order to find out whether he got some support," Heitz said.

He announced on Friday that one of the 12 people left injured in the attack had died of their injuries, bringing the total toll to four. Heitz said one other person remained in a life-threatening condition and four others were still hospitalized on Friday.

Chekatt is suspected of killing all the victims near Strasbourg's Christmas market on Tuesday night. It was the latest in a series of deadly attacks that have claimed more than 200 lives in France since 2015.

The propaganda wing of the Islamic State of Iraq and Syria (ISIS), its self-styled Amaq news agency, claimed that the Stasbourg gunman was a "soldier" of the group, although the group provided no evidence of any links with Chekatt.

Meanwhile, the Christmas market reopened for the first time since the attack, amid tight security on Friday. Castaner attended the reopening and had a stroll to meet with shopkeepers.

Access to the market has been reduced while extra police officers and military have been deployed to the site, in addition to private security guards.

"This Christmas market is part of our history. It's part of our common events and belongs to all the French people," Castaner said. "And this morning, we wanted to show, as we walked down the lanes, that we always know how to get our head up again."

Heitz gave more details about the police operation that led to Chekatt's death on Thursday evening after a two-day manhunt. He said the suspect was localized after police received two crucial tipoffs from Neudorf residents. Three officers patrolling in Neudorf ultimately spotted a man corresponding to the suspect's description. He noticed their vehicle and tried unsuccessfully to enter a building. When police officers identified themselves, Chekatt turned around and opened fire.

Investigators found a gun, a knife and ammunition on Chekatt's body.

The immediate aftermath of the shootout between French security forces and the suspect was caught on camera from across the street, with video footage showing armed officers at the scene and the body of the man slumped in a doorway.

More officers arrive at the scene soon after, followed by crime scene investigators.

The Paris prosecutor's office formally identified the man as Chekatt, a Strasbourg-born man with a long history of convictions for various crimes, including robberies. Chekatt also had been on a watch list of potential extremists. He had his first conviction at 13, and had 26 more by the time he died at age 29. He served jail time in France, Germany and Switzerland.

Witnesses said the gunman shouted "God is great!" in Arabic and sprayed gunfire from a security zone near the Christmas market on Tuesday. Security forces wounded the man in the arm but he managed to escape in a taxi. 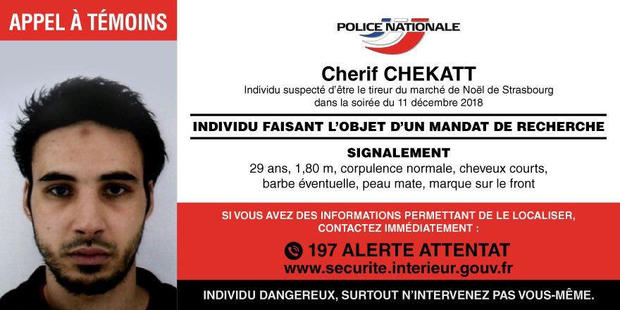 Brexit: The ever-changing facts and what you need to know