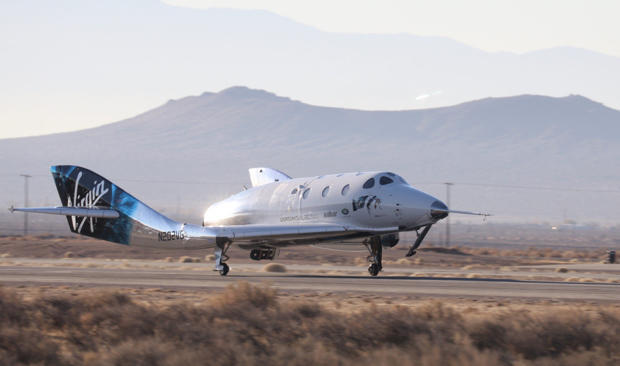 Virgin Galactic sends rocketplane to the edge of space

Virgin Galactic's rocket-powered SpaceShipTwo carried two test pilots out of the discernible atmosphere Thursday, the company's first piloted flight to the edge of space and a major milestone for Sir Richard Branson's plans to eventually launch tourists on brief, sub-orbital trips to space.

It was the fourth non-government, purely commercial flight to carry pilots out of the lower atmosphere and into the realm of space, the first since 2004, and the first by any piloted spacecraft built in the United States since the space shuttle's final flight in 2011.

Did the crew make it all the way to space? The Air Force considers 50 miles up as the point where aerodynamic effects become insignificant and space begins. Virgin Galactic's SpaceShipTwo reached an altitude of 51.4 miles during Thursday's test flight.

The Fédération Aéronautique Internationale, the body that sanctions aerospace records, considers 100 kilometers, or 62 miles, as the boundary of space. By that standard, Virgin Galactic still has a way to go. However one counts it, Thursday's flight was a major achievement for Branson's space tourism program.

Built by The Spaceship Co., Virgin's SpaceShipTwo rocketplane, also known as VSS Unity, was carried aloft from the Mojave Air and Space Port by a twin-fuselage carrier jet known as WhiteKnightTwo and released at an altitude of about 43,000 feet.

It was the fourth powered flight of the spaceplane, also known as VSS Unity, and it's 15th overall since a devastating in-flight breakup in 2014 that destroyed an earlier model and killed one of its two pilots. Thursday's flight was the company's first featuring a long-duration rocket firing.

The flight appeared to go off without a hitch as the pilots guided the vehicle out of the thick lower atmosphere, shooting upward on a steep trajectory. The rocket motor shut down normally 60 seconds after ignition as the spacecraft coasted upward at 2.9 times the speed of sound.

The spaceplane climbed to an altitude of 271,268 feet, or 51.4 miles, according to a Virgin Galactic tweet, a new record for SpaceShipTwo.

Jonathan McDowell, an astrophysicist at the Harvard-Smithsonian Center for Astrophysics and a widely respected space analyst, recently authored a paper concluding 50 miles is indeed the point where, for a wide variety of reasons, the atmosphere stops being a factor in a vehicle's aerodynamics.

"On the basis of these physical, technological and historical arguments, I therefore suggest that a value of 80 km is a more suitable choice to use as the canonical lower 'edge of space' in circumstances where such a dividing line between atmosphere and space is desired," he wrote.

As SpaceShipTwo arced over the top of its trajectory and began the long glide back to Earth. Stucky and Sturckow, along with four NASA microgravity experiments, were expected to experience a few minutes of weightlessness before the ship plunged back into the denser air below.

The pilots raised the vehicle's twin tail booms to an angle of 60 degrees, in a maneuver known as "feathering," to ease the stresses experienced while falling back into the atmosphere.

The tail booms were rotated back in line with Unity's fuselage at an altitude of about 50,000 feet and from there, the pilots flew a normal gliding approach to a runway landing at the Mojave Space and Air Port where Branson and company workers were gathered to welcome the crew back.

SpaceShipTwo is based on the design of famed aerospace designer Burt Rutan's smaller single-seat SpaceShipOne, which became the first privately funded spacecraft to fly above 100 kilometers in 2004, winning the $10 million Ansari X-prize competition.

SpaceShipTwo is a scaled-up version of the rocketplane that can carry a crew of two and four to six space tourists. While it is not capable of reaching orbit, the spacecraft will allow passengers and crew to experience several minutes of weightlessness during the fall back into the discernible atmosphere.

Branson has not yet indicated how many more test flights are planned or when he hopes to begin commercial flights carrying space tourists willing to pay more than $200,000 a ticket for the chance to experience weightlessness and see the Earth from the vantage point of space.

Once commercial flights begin, Virgin Galactic will be competing with Blue Origin, owned by Amazon-founder Jeff Bezos. Blue Origin is building a roomy capsule that will be boosted out of the atmosphere by a more traditional hydrogen-powered rocket. After separating from the booster, the capsule will descend to Earth using parachutes.

Bill Harwood has been covering the U.S. space program full-time since 1984, first as Cape Canaveral bureau chief for United Press International and now as a consultant for CBS News. He covered 129 space shuttle missions, every interplanetary flight since Voyager 2's flyby of Neptune and scores of commercial and military launches. Based at the Kennedy Space Center in Florida, Harwood is a devoted amateur astronomer and co-author of "Comm Check: The Final Flight of Shuttle Columbia." 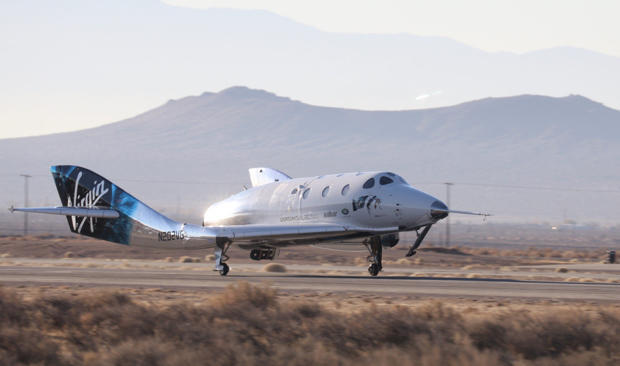