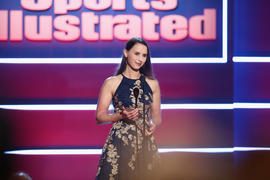 "I am in awe of you, and I will always be inspired by you," Blasey Ford said in a Sports Illustrated video posted on Twitter.

Denhollander was the first victim to publicly come forward against USA Gymnastics doctor Larry Nassar. She filed a criminal complaint against Nassar in 2016 and spoke to the Indianapolis Star, saying she was assaulted by Nassar in 2000 when she visited him at the age of 15 for back pain treatment.

In a seven-day hearing in January 2018, more than 150 women and girls confronted Nassar, who they said abused them. He was sentenced to decades behind bars and is now serving an effective life sentence.

"Her courage inspired other survivors to end their silence, and we all know the result," Blasey Ford said in the video.

She said Denhollander took "a huge risk" in stepping forward and "galvanized future generations to come forward even when the odds are seemingly stacked against them."

"The lasting lesson is that we all have the power to create real change, and we cannot allow ourselves to be defined by the acts of others," she said.

Blasey Ford testified against then-Supreme Court nominee Judge Brett Kavanaugh in September. She said she was "100 percent" certain that Kavanaugh assaulted her when they were both in high school — an allegation Kavanaugh has denied. She detailed the alleged assault during the hearing.

Late last month, Blasey Ford released a rare statement on a GoFundMe page. She said "generous contributions" have allowed her and her family to protect themselves from "frightening threats" and increase security on their home. She said, "Words are not adequate to thank all of you who supported me since I came forward to tell the Senate that I had been sexually assaulted by Brett Kavanaugh." 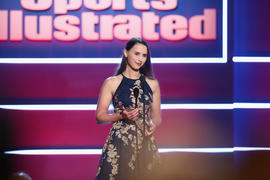