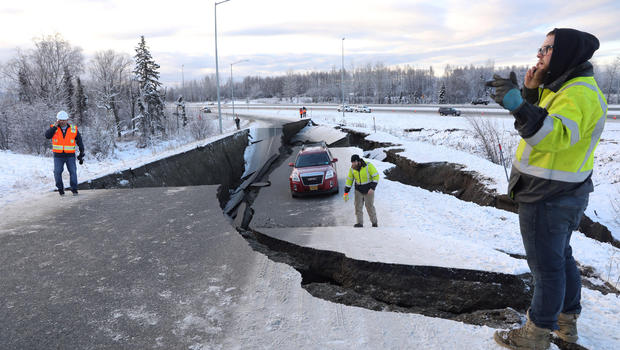 Moments after the quake hit, air traffic controllers told a FedEx plane to go around the runway. Airport officials say the jet was about 300 to 400 feet in the air, about to land, when flight controllers told the pilot not to touch down.

Airport operations duty manager John Stocker told KTVA they had no idea yet the extent of the damage to the runways.

"For the same type of things that you saw for the on-ramps, you could have had surface that could have changed as much as a foot," Stocker said. "Well, if you're landing an almost million pound airplane you could easily damage the gear; do all sorts of different things. It's much safer at that point to be in air."

Before the tower was evacuated, airport officials controllers told pilots they would be landing without any communication from the tower. The pilots could only talk to each other and planes on the ground so their location would be known.

Stocker told KTVA three air traffic controllers who left the tower drove a pickup across the runways and parked near the side of one of them so they could see planes in every direction. Other controllers who were still in the tower spaced out the planes in the air, until pilots could receive further instructions.

According to KTVA, there were approximately eight planes were in the vicinity of the airport, including two Alaska Airlines passenger planes. The first two or three planes landed safely on their own, Stocker said.

Then the three controllers in the truck, a Ford F-150, started communicating with pilots who were holding over Anchorage.

Stocker told KTVA he and a group of many other airport staffers checked landing lights, runways and taxiways and deemed the areas safe for air traffic.

The controllers in the truck then guided remaining planes in for safe landings, KTVA reports. Stocker said they operated like that for about an hour and fifteen minutes, directing flights inbound and outbound.

But as with the rest of the earthquake zone, there were no deaths, serious injuries or widespread catastrophic damage.

In fact, Air Force Lt. Col. Jacob Leck, who is originally from Idaho, expected far worse in his first-ever earthquake, he said Friday during a news briefing on the impact of the Nov. 30 quake that struck 7 miles north of Anchorage. Such was the force felt during the quake, which has been followed by thousands of aftershocks.

"I thought for sure that we had significant damage and that it was going to be a catastrophic loss of some facilities," said Leck, commander of the 773D Civil Engineer Squadron and director of the base emergency operations center. "And to this date, we have not found anything of the magnitude that I ever expected."

The base was quickly ready to receive aircraft, with three C-130s landing within an hour after the quake, according to officials.

The base is home to two F-22 Raptor fighter squadrons. None of the more than 40 F-22s on base was damaged in earthquake, JBER spokeswoman Erin Eaton said.

Damages at the base are still being assessed, with a subsurface assessment planned by an airfield pavement evaluation team heading to Alaska from Tyndall Air Force Base in Florida, officials said.

Base officials unveiled damage to a swimming pool room in a base fitness building during Friday's briefing. Ceiling panels were still missing, and the floor near the empty pool was littered with debris. The building is among several that remain closed at the base.

The 123-square-mile base, located on Anchorage's north side, is home to about 1,000 buildings, plus another 3,200 housing units. Only one household was displaced, and that was because of a water outage.

None of the seven bridges on base was damaged.

The base has provided emotional support to those who need it, said Col. Michael Staples, commander of the 673D Civil Engineering Group. "The chaplain has been very busy," he said.

The main earthquake damaged structures over a wide of the temblor's impact zone area in Anchorage and beyond, disrupting power and cracking roads.

As of early Friday afternoon, there had been more than 3,100 aftershocks, including 15 with a magnitude of 4.5 and above, said seismologist Natalia Ruppert with the Alaska Earthquake Center.

Anchorage police warned Friday that rockfalls were still occurring along a 6-mile stretch of the cliff-lined Seward Highway. 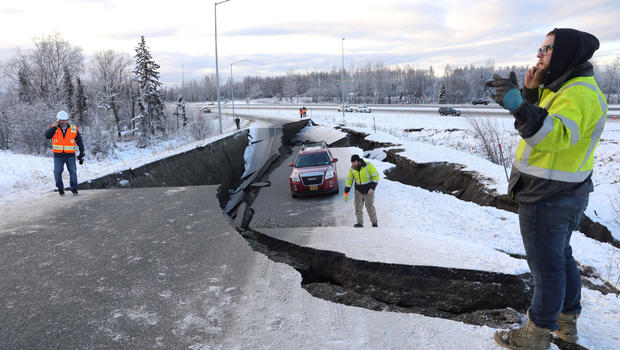 Friend, former agent, others testify about Johnny Depp's substance use