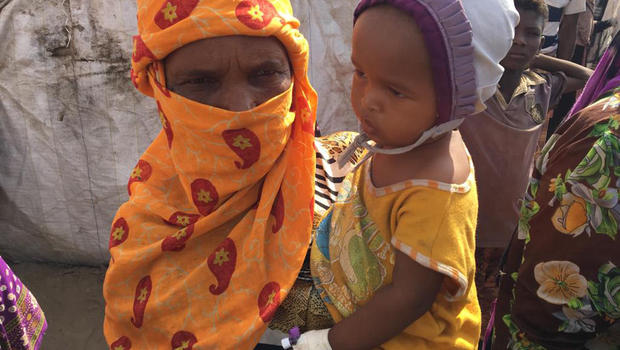 By Elizabeth Palmer CBS News December 7, 2018, 6:39 PM Children are starving to death and struggling without medication in Yemen

ADEN, Yemen — The U.N. warned Friday the world's worst humanitarian crisis is getting worse. Because of an ongoing civil war, more than 20 million in Yemen face starvation.

Abrar Ibranhim, 11, was slowly starving, trapped in one of the most violent pockets of the war until her family escaped and got her to the hospital. Her mother told Dr. Maqdi Seif there was so little food that Abrar eventually got too weak to eat at all.

Seif also took CBS News to see 3-year-old Yussuf Adel fighting for breath. He has diphtheria, and it can be deadly. A quarter of the patients die.

"Most of them not vaccinated because of the war," Seif said.

That's the case here. Yussuf's mother was too afraid of the fighting to go to the clinic. Sick as these kids are, most are on the mend thanks to a medical program funded by UNICEF. But there are so many that international aid hasn't reached.

The Mishkhafa refugee camp is a makeshift village in the barren fields just outside Aden. It's home to roughly 2,500 people who fled violence.

The Ali family can't get help for their 6-year-old daughter Hannan, who has a serious neurological problem. When she falls and hurts herself, the wounds attract dirt and flies. But there's nothing her parents can do. In a place like this, even basic medical attention might as well be on another planet.

The U.N.'s humanitarian chief has described what's happening here as a major catastrophe and he said it has the potential to become the worst situation this generation of aid professionals has ever seen.