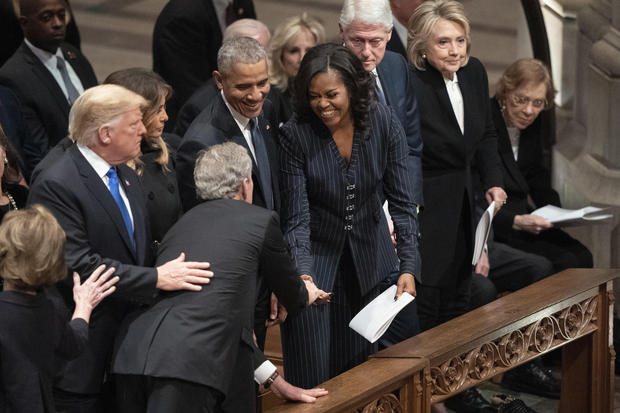 When President George W. Bush greeted former presidents and their spouses at the funeral for his father, George H.W. Bush, he offered more than a handshake to former first lady Michelle Obama. He appeared to slip her a piece of candy, causing Obama to break out in a wide smile.

It was an oddly lighthearted moment in the midst of a funeral proceeding, a microcosm of the unusual friendship between the 43rd president and the former first lady. Bush also snuck a cough drop to Obama during former Sen. John McCain's funeral in September.

Obama described the viral "cough drop moment" at McCain's funeral in an interview with "Today" in October.

"President Bush and I, we are forever seatmates because of protocol, and that's how we sit at all the official functions," Obama said about her relationship with the former president. "He's my partner in crime at every major thing where all the 'formers' gather. So we're together all the time."

Obama and Bush's friendship has become a model of bipartisan bonhomie since former President Barack Obama was in office. They famously shared a hug at the National Museum of African American History and Culture dedication ceremony in 2016.

Bush told People Magazine in 2017 that he and Obama shared a kinship thanks to their mutual sense of humor.

Bush acknowledged in another interview with Ellen DeGeneres in 2017 that his and Obama's friendship often surprises people, as it shows "that people on opposite sides of the political spectrum can actually like each other." 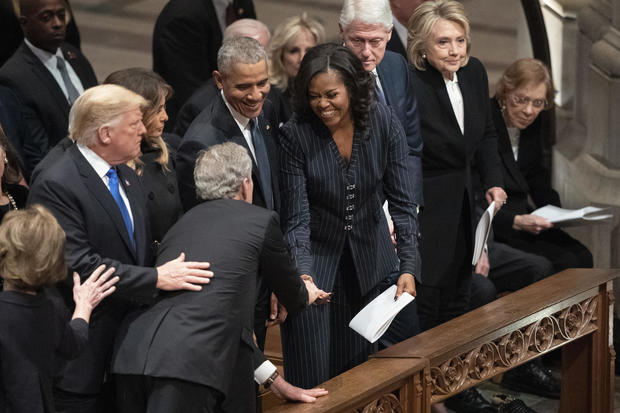