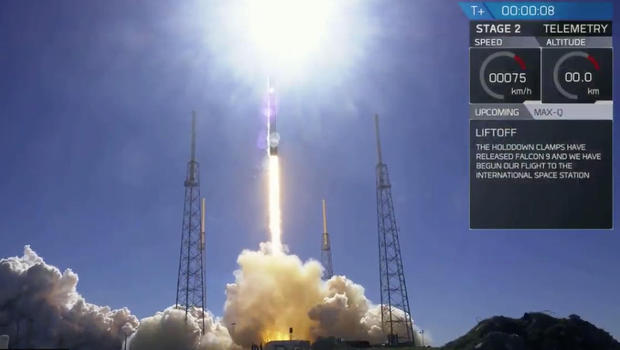 Two days after a successful launch from California, SpaceX fired off another Falcon 9 rocket from Cape Canaveral Wednesday, this one carrying a Dragon cargo ship loaded with more than 5,660 pounds of equipment and supplies bound for the International Space Station.

As has become standard practice for the California rocket builder, the Falcon 9's first stage was programmed to fly itself back to a landing at the Cape Canaveral Air Force Station about eight minutes after launch in a bid to chalk up the company's 33rd successful booster recovery and its 12th at the Florida spaceport.

But the primary goal of the flight, SpaceX's 20th so far this year, was to boost the Dragon cargo ship into the space station's orbit for a planned three-day rendezvous. If all goes well, the spacecraft will catch up with the station early Saturday morning.

On board: 670 pounds of food, clothing and other supplies for the station's crew, 2,286 pounds of science equipment and supplies — including 40 rodents — nearly 200 pounds of spare parts and other station-related gear, 88 pounds of computer equipment, 33 pounds of spacesuit components and tools and about 25 pounds of Russian cargo.

The Dragon was the third space station supply ship launched to the station in less than a month. A Russian Progress freighter was launched from Kazakhstan on Nov. 16 and a Northrop Grumman Cygnus cargo ship took off from Virginia the next day. Overall, Wednesday's flight was the ninth space station resupply mission launched this year.

The mission got underway at 1:16 p.m. EST (GMT-5) when the Falcon 9's nine Merlin 1C engines ignited with a roar and a torrent of fiery exhaust, quickly pushing the 230-foot-tall booster away from launch complex 40 at the Cape Canaveral Air Force Station.

At the moment of liftoff, the space station was flying 250 miles above the Indian Ocean south of Australia, but the plane of its orbit was sweeping across the Cape Canaveral Air Force Station as the Earth rotated under it. The Falcon 9 climbed away to the northeast directly into that orbital plane to enable the planned rendezvous.

The first stage engines were expected to shut down prior to stage separation two minutes and 23 seconds after liftoff. The single engine powering the second stage then was expected to ignite to continue the Dragon's climb to orbit.

The first stage, meanwhile, was programmed to flip around and restart three engines to reverse course and head back toward Florida. Another burn was planned to slow down for descent back into the thick lower atmosphere before a final, single-engine firing to set the stage down on a concrete landing pad at the Air Force station.

A successful landing would mark SpaceX's 12th touchdown on Landing Zone 1 in Florida and its 33rd successful recovery overall, with 20 landings to date on off-shore drone ships and one at Vandenberg Air Force Base in California.

But the primary goal of Wednesday's mission was to deliver the Dragon cargo ship to the proper orbit.

If all goes well, the spacecraft will reach the station around 6 a.m. Saturday morning, pulling up to within about 30 feet and then standing by while station commander Alexander Gerst, operating the lab's robot arm, locks onto a grapple fixture.

Flight controllers at the Johnson Space Center in Houston will take over at that point, operating the arm by remote control to pull the Dragon in for berthing at the Earth-facing port of the station's forward Harmony module.

Science gear, experiments and a spacewalk

The science gear on board includes an experiment to test robotic spacecraft refueling techniques using ultra-cold cryogenic propellants, another instrument that will use laser beams to measure tree heights globally to determine the relationship between deforestation and carbon dioxide processing and another to develop wound dressings that improve drug delivery.

Yet another experiment will study development of retinal implants intended to restore vision to patients with age-related macular degeneration and retinitis pigmentosa. The Marvel Guardians of the Galaxy Space Station Challenge is sponsoring student experiments to develop a UV-activated dental glue that could help astronauts on long-duration voyages and another testing a mist-based irrigation system for plants grown in space.

With the Dragon in hand, the station crew will turn its attention to a planned spacewalk next Tuesday by cosmonauts Sergey Prokopyev and Oleg Kononenko to inspect the Soyuz MS-09/55S ferry ship that carried Gerst, Prokopyev and Serena Auñón-Chancellor into orbit on June 6. Kononenko arrived at the station Monday along with Canadian astronaut David Saint-Jacques and NASA astronaut Anne McClain.

In late August, sensors detected a small pressure drop in the station's air supply that was traced to a leak in the upper habitation module of the Soyuz MS-09 vehicle. An inspection revealed what looked like a small hole drilled into an interior panel.

Prokopyev sealed the hole with cloth soaked in epoxy and stopped the leak. Russian engineers ordered the spacewalk next week to inspect the exterior of the Soyuz to look for any signs of damage that might be related to the hole found inside the spacecraft.

In any case, the habitation module is discarded before atmospheric entry and the issue is not considered any sort of safety threat when Gerst, Prokopyev and Auñón-Chancellor return to Earth on Dec. 20. 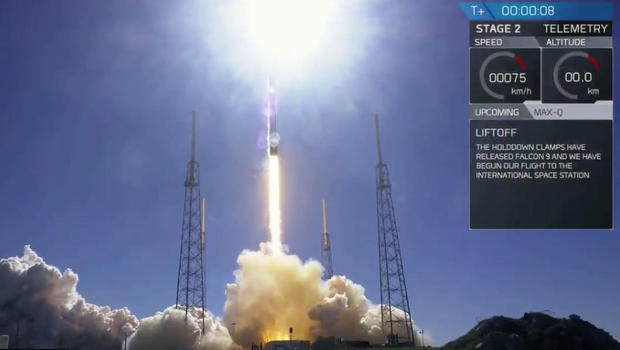 21 Savage on his immigration case: “I’m not leaving without a...