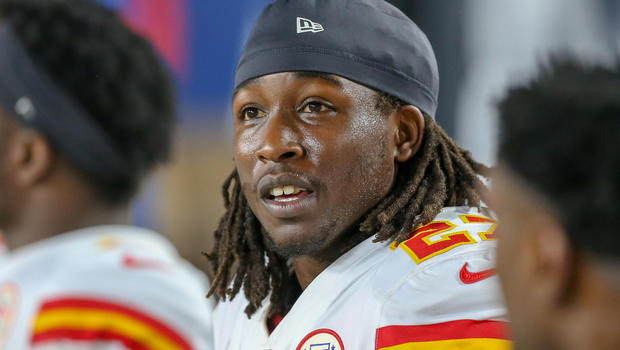 Cleveland police released body camera video Monday showing their interview with a woman who was seen on video being kicked by former Kansas City Chiefs star Kareem Hunt. A 19-year-old woman told police she was waiting outside Hunt's residence trying to find a ride home when all of the sudden she was attacked.

"Kareem, his name, the man who assaulted me, shoved me," she said.

Video released last week by TMZ Sports shows Hunt hitting and then kicking her. Once that February video became public, it was the end of Hunt's career as a Kansas City Chief. On Friday, the team let him go.

"The Chiefs did what was right. I made a poor decision," he told ESPN. His record year on the field was sidelined only after TMZ released the video of the assault.

Since the 2014 video of former Ravens running back Ray Rice became public, according to the USA Today database on player arrests, at least 27 NFL players have been accused of committing some form of violence against women. Currently at least seven remain a part of an NFL organization this season.

Former CEO of the Oakland Raiders and CBS Sports analyst Amy Trask said the NFL isn't aggressive enough when it comes to investigating its own players for these types of alleged assaults.

"I would search like Nancy Drew to find that video recording. Historically, teams and the league have not been willing to do what outlets like TMZ have been willing to do. It may be time to rethink that. Not to do anything illegal, but to do more to gather video," Trask said.

The NFL is now investigating Hunt and plans to interview everyone involved that night. Even if another team picks him up, under the league's personal conduct policy, Hunt could face a six-game suspension.