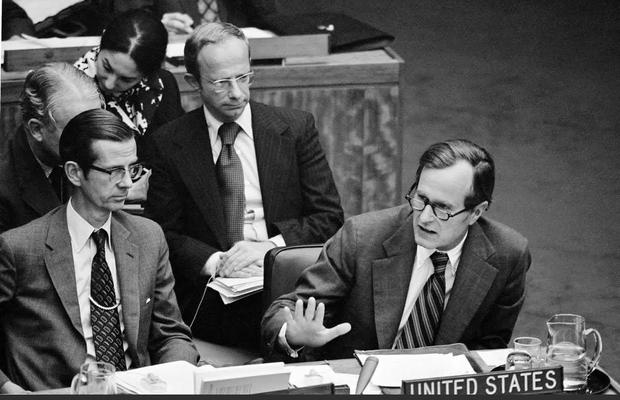 UNITED NATIONS — Amid the global crises of the 1970s, former President George H.W. Bush, who died on Friday at 94, stood out as a diplomat and tough negotiator on the world stage. As ambassador to the U.N. from March 1971 until January 1973, Mr. Bush cut his teeth in global diplomacy during a period when the U.S. remained mired in Vietnam and the Cold War began to enter a new phase.

Mr. Bush remains the only U.S. president to have served as U.N. ambassador, and his presidency became a study in foreign policy crisis management and high-stakes diplomacy, skills he had honed at the United Nations.

Bush was "a leader who served the United States with distinction and supported the United Nations with dedication," U.N. Secretary General Antonio Guterres said Saturday.

While his presidency was defined by the fall of the Soviet Union and the Gulf War, his earlier handling of a burgeoning U.S. relationship with China resulted in one of his most significant setbacks, while simultaneously providing the type of experience that would propel him to the Oval Office.

President Richard Nixon's decision to engage with China in the early 1970s after decades of isolation has a rich history of secret negotiations and delicate statecraft that came to be known as "ping pong diplomacy."

Nixon's trip to China in 1972 to meet with Mao Zedong was a landmark shift, but before it could happen, the Chinese leadership made a line-in-the-sand demand: The U.S. would have to sever relations with Taiwan in order for the still-nascent opening to continue.

Under what came to be known as the "two-China solution," the Nixon administration pushed for Mao's government to be admitted to the U.N., while letting the ROC — Taiwan — also retain its seat.

But dozens of countries opposed Taiwan's status as China's representative in the U.N., and support built for expelling the ROC altogether.

"In trying to save Taiwan's seat, he had set what must be a U.N. track record for personal effort," LIFE Magazine would write. "He raced to and from meetings, collapsing at the end of a long day knowing that even though he was sometimes so tired that he said he wanted to cry, he would do it all over again tomorrow."

Mr. Bush and his wife Barbara Bush, who was crocheting in the chamber's gallery, were sneered at and booed during the raucous session when the resolution failed.

The resolution was explicit in its rebuke of the ROC: The U.N. would "expel forthwith the representatives of Chiang Kai-shek from the place which they unlawfully occupy at the United Nations."

It was a demoralizing defeat for the new ambassador, who had worked hard to secure the compromise.

"We lost the China vote. The People's Republic of China was admitted to the United Nations – which we supported – but Taiwan was expelled," he wrote in a letter on Oct. 31, 1971. "In the end, it became more of an anti-American vote than anything else … Some anti-American delegates literally danced in the aisles.

"I felt it was a dark moment for the United Nations and international diplomacy."

A new relationship with China

The expulsion of Taiwan's U.N. delegation did not immediately affect U.S. policy. At the time, the U.S. still had diplomatic relations with the ROC, but not with the PRC.

Mr. Bush left to become chairman of the Republican National Committee in 1973 at the height of Watergate.

In September 1974, the Nixon administration named Mr. Bush the chief envoy to the PRC in Beijing. Mr. Bush was the unofficial U.S. ambassador until the following year, when he returned home to head the CIA.

The U.S. and the PRC finally established formal diplomatic relations in 1979 after President Jimmy Carter unilaterally terminated a defense treaty with the ROC in Taiwan. Sen. Barry Goldwater sued the administration and took the case to the U.S. Supreme Court, challenging Carter's right to nullify the pact without Congress' consent. The Supreme Court sided with the Carter administration.

"We have one policy – there is one China," Mr. Bush wrote to Goldwater in 1982 when he was vice president. "We remain a loyal friend to Taiwan while we simultaneously try to advance our relationship with the PRC … We believe that good relations between the U.S. and the PRC advance the cause of peace worldwide."

Those relations strained during Mr. Bush's presidency following the Tiananmen Square massacre in June 1989, just five months into his term. The U.S. imposed sanctions in retaliation for the crackdown. In the years that followed, China relations improved.

Mr. Bush visited China 22 times in his post-presidency years. He helped usher in a new relationship with the country, both at the U.N. and in the White House. 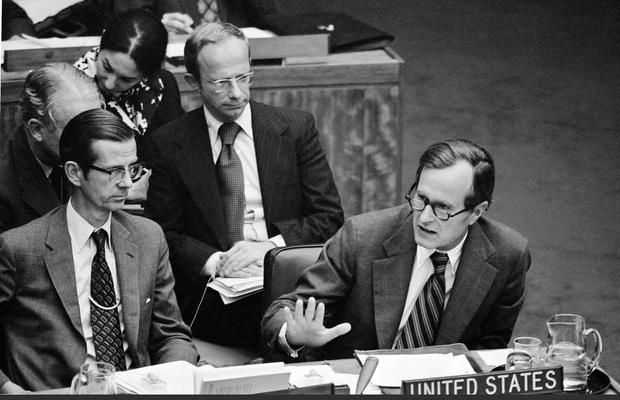