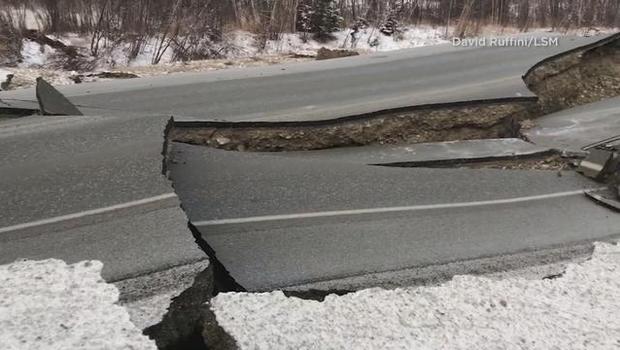 CBS News December 1, 2018, 11:39 AM Anchorage, Alaska recovers from shock of earthquakes that rattled buildings and tore up roads

CBS News correspondent Carter Evans reports that despite the damage, there were no fatalities reported. President Trump said the federal government "will spare no expense" on the recovery.

Evans stood on Saturday morning next to a highway off-ramp in Anchorage that crumbled as the powerful earthquakes struck. There were cars on the road at the time, but everyone escaped.

On Saturday morning the clean-up and repair effort began. Alaska Governor Bill Walker told CBS News on Friday night that the state was just beginning to evaluate the extent of the damage.

The earthquake rattled buildings in Anchorage, but the reverberations were so strong they were felt up to 350 miles away.

As one Anchorage resident put it, the shaking seemed to go on, "like, forever."

"That scared the crud out of everybody, and everybody's freaking out a little bit," another rattled Alaskan said Friday afternoon, as students dove under their desks to take cover as the quake rocked classrooms.

Thousands of homes and businesses lost power. Downed lines were the expected cause of a fire at a church in Anchorage.

At our CBS station in anchorage the shocks brought down parts of the ceiling, knocked over equipment and shattered glass.

Major roads across the region were torn apart, including parts of Alaska's scenic Glenn Highway. Traffic piled up for miles as cars inched past damaged areas.

Alongside Governor Bill Walker, CBS News' Evans and his crew were the first to return to the state capitol after it was evacuated Friday morning.

Walker was in one of the building's elevators at the time of the quake.

"Sometimes elevators rattle around a little bit," noted Walker. "But then it really got going, and I thought, 'wow, this feels… this feels like the big one. This feels like something that could really do some damage.'"

Later, Walker surveyed the damage from the air with the Alaska National Guard. He told CBS News it brought back memories of the state's devastating 9.2-magnitude earthquake in 1964.

"The sheer strength of an earthquake — that you can crumble a perfectly good highway, that you can buckle a bridge. i mean, it was amazing, the power behind what we saw."

There is a lot of infrastructure damage, hundreds of gas leaks are posing a new danger, and of tons of road work that has to be done. According to the governor, it could take weeks to recover. 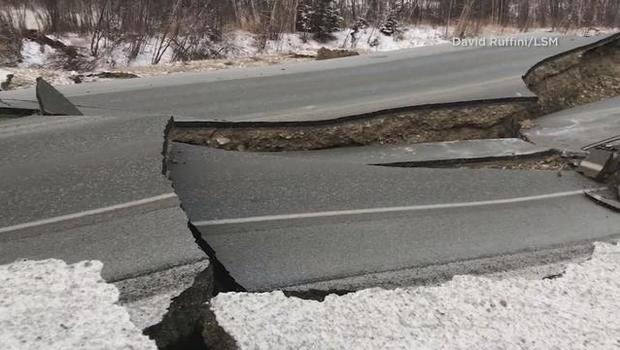 Gabrielle Union on “The Inspection,” message to families of LGBTQ kids