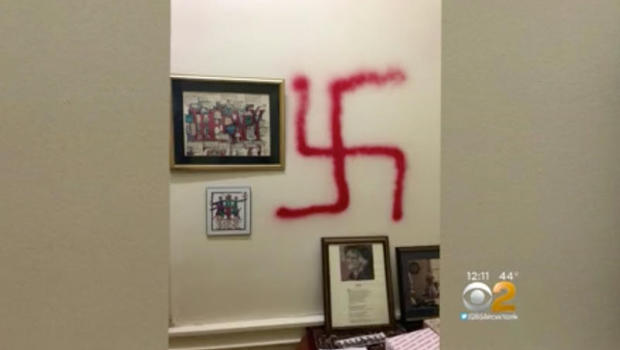 A Columbia University professor stopped in her tracks when she opened her office door Wednesday and discovered anti-Semitic graffiti spray painted across the walls. This is the second time Dr. Elizabeth Midlarsky, a professor of psychology at Columbia University's Teachers College, has been targeted with anti-Semitic slurs, CBS New York reports. A hate crime investigation is now underway.

"I opened my door and in front of me was a big red swastika. I was, to put it mildly, shocked," Midlarsky told CBS New York. "Then there was one on another wall and the word on the third wall," she said, referring to an anti-Semitic slur painted in red

"I feel vulnerable for the first time in my life," she said.

Midlarsky, a professor for 28 years, has written extensively about the Holocaust throughout her career. "I'm writing chapters and articles, but not exactly the thing that'd get people incensed," she said.

She said the vandalism still didn't totally surprise her. "Bias is going up, doubling in some places. Especially against Jews," the professor said.

Despite the fact that crime has reportedly gone down citywide, the NYPD says hate crimes have risen 12 percent compared to this time last year, and anti-Semitic crimes have spiked 29 percent. Nationwide, the FBI reports hate crime incidents targeting Jews and Jewish institutions in the U.S. rose about 37 percent between 2016 and 2017.

Midlarsky was also targeted 10 years ago when anti-Semitic fliers were put in her mailbox, she said.

After Wednesday's incident, Midlarsky called police and continued teaching her regular classes for the day. She said the outpouring of support from students helped get her through.

"They said they were with me, they love me, they support me. It's beautiful, that part of this is beautiful," she said.

The president of Teacher's College condemned the incident in an open letter, saying, "We are outraged and horrified by this act of aggression and use of this vile anti-Semitic symbol against a valued member of our community." 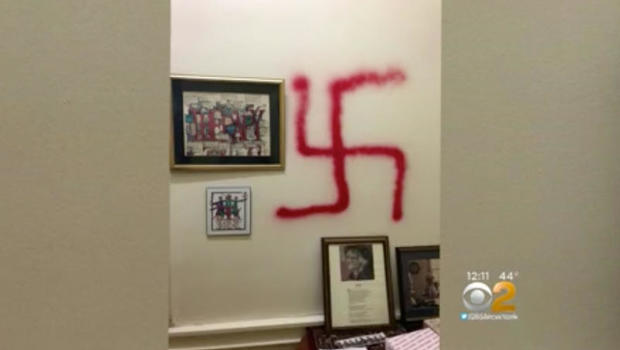 “Sad and depressed” Fishtopher the cat gets adopted after viral listing