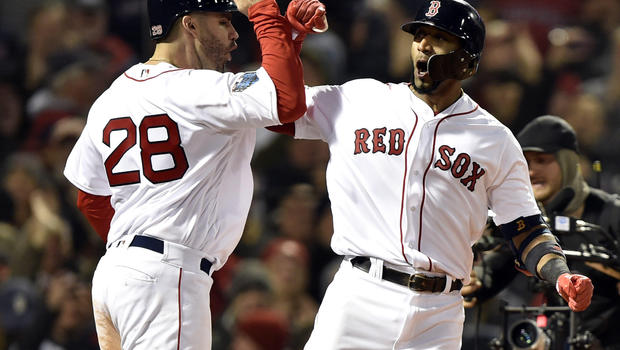 BOSTON — The Fenway Funhouse proved too tricky, too cold and just too much for the beach boys.

Andrew Benintendi, J.D. Martinez and the Boston Red Sox came out swinging in the World Series opener, seizing every advantage in their quirky ballpark to beat the Los Angeles Dodgers 8-4 on a chilly, windy Tuesday night.

Benintendi had four hits, Martinez drove in two early runs and pinch-hitter Eduardo Nunez golfed a three-run homer to seal it. The 108-win Red Sox got a solid effort from their bullpen after an expected duel between aces Chris Sale and Clayton Kershaw never developed.

From the get-go, Fenway Park caused all sorts of problems for the Dodgers.

Mookie Betts led off for the Red Sox with a popup that twisted first baseman David Freese as he tried to navigate the tight foul space near the stands. Lost, he overran the ball and it dropped behind him.

Given a second chance, Betts lined a single that set up a two-run first inning.

"It was important for us to score first and kind of put some pressure on them," Betts said.

In the seventh, left fielder Joc Pederson looked hesitant as he chased Benintendi's soft fly, rushing toward the seats that jut out down the line. The ball ticked off his glove for a double, and soon Nunez connected to break open a 5-4 game.

The crowd and cold temperatures were no picnic for Los Angeles, either.

The oddly angled ballpark became an echo chamber even before the first pitch. Chants of "Beat LA!" began early, Kershaw got heckled with a sing-song serenade and Dodgers villain Manny Machado heard loud boos all evening.

Only one person wearing Dodger blue drew a cheer: Manager Dave Roberts, saluted in pregame introductions for the daring steal that turned the tide in Boston's 2004 playoff comeback against the Yankees.

It was 53 degrees at first pitch, the coldest game for Los Angeles this year and quite a contrast from last year's World Series, when it was a record 103 degrees for the opener at Dodger Stadium.

Game 2 is Wednesday night, when it's supposed to be even colder. David Price, fresh from beating Houston in the American League Championship Series clincher, starts against Hyun-Jin Ryu.

Benintendi scored three times for Boston, trying for its fourth championship in 15 years.

Matt Kemp homered and Justin Turner had three hits for the Dodgers, aiming for their first crown since 1988. Machado drove in three runs, and his RBI grounder in the fifth inning made it 3-all.

Boston retook the lead in the bottom half when Xander Bogaerts hustled to beat out a potential inning-ending double play – Dodgers reliever Ryan Madson seemed to celebrate a little too early.

Rafael Devers followed with an RBI single, giving himself an early birthday present. He turned 22 at midnight, three minutes before the game ended.

Martinez led the majors with 130 RBIs, and gave the crowd a scare when his foot slipped rounding second base on a run-scoring double in the third. He fell hard, but soon got up.

A day before this opener, Kershaw and most of the Dodgers pooh-poohed the prospect that Fenway would cause them problems. Most of them had never played at the oldest park in the majors, built in 1912, but said they were sure they'd be OK.

It didn't quite turn out that way in their first trip to Fenway since 2010.

Besides, clubs coming to Beantown have other things to worry about.

"I think the biggest challenge for a team coming in here is you're playing the Boston Red Sox," pitcher Nathan Eovaldi said Monday.

The only other time the Dodgers and Red Sox met in the World Series was 1916, when Babe Ruth helped pitch Boston to the championship. Those games were at Braves Field, the bigger home park of the city's National League franchise.

Kershaw and Sale each started out wearing short sleeves, but neither warmed to the possibility of the marquee matchup. In similar outings, both were pulled before getting an out in the fifth.

Kershaw took the loss in his first appearance at Fenway, tagged for five runs on seven hits and three walks. The three-time NL Cy Young Award winner fell to 9-9 in the postseason, his October results often falling short of his brilliant regular-season resume.

Matt Barnes, the first of six Boston relievers, got the win. They combined to hold the Dodgers to one run on three hits in five innings.

Boston manager Alex Cora won in his first try guiding a club in the Series. This also marked the first World Series game between teams led by minority managers.

Both teams had omens on their side.

Three gorgeous rainbows appeared over Fenway before the game, much like a colorful arc that came ahead of Boston's winning effort in the 2013 World Series.

The stadium organist played "The Impossible Dream" in a nod to Red Sox great Carl Yastrzemski. The 79-year-old Yaz bounced his ceremonial first pitch, asked for another try and did fine.

Magic Johnson was in the park, too. The former Lakers star, who heard plenty of "Beat LA!" chants at Boston Garden, is a part-time owner of the Dodgers and visited Fenway for the first time.

Plus this: On this date in 1945, Dodgers executive Branch Rickey announced the signing of Jackie Robinson. 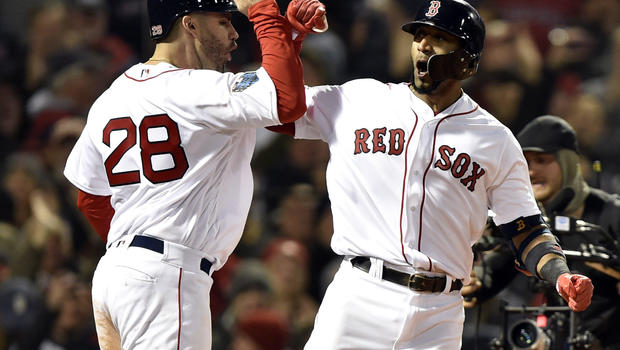 Breaking down the biggest cases headed to the Supreme Court

China warns war on Korean Peninsula will have no winner