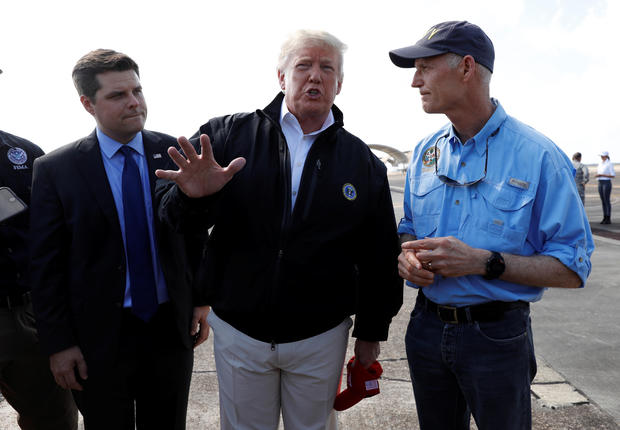 President Trump and first lady Melania Trump are visiting Florida and Georgia on Monday to see firsthand damage sustained by Hurricane Michael which left at least 19 people dead in the Southeast.

Before he left, the president told reporters he had spoken with Saudi Arabia's king, who vehemently denies any knowledge about the disappearance of journalist Jamal Khashoggi. Mr. Trump even suggested "rogue killers" could be behind Khashoggi's disappearance — he was last seen entering the Saudi consulate in Turkey — before adding that he didn't know.

"His denial to me could not have been stronger," Mr. Trump told reporters before leaving for Florida and Georgia, adding later, "The denial was not only a denial, it was a very firm denial."

The Trump administration has been criticized for its reluctance to criticize the Saudis.

Back at home, the president has attempted to keep some focus on the hurricane that ravaged Florida and Georgia. With winds reaching 155 miles per hour, the monster storm slammed into the Florida Panhandle, leaving behind a trail of destruction FEMA's chief described as among the worst he's ever seen.

"I just want to mention that while we're here we're going to be doing a pretty big tour and then we're going to Georgia," the president said upon landing in Florida. "I'm going to Georgia. Rick Scott, your governor, has done an incredible job. All of your people have been amazing working with FEMA, working with the first responders, working with local law enforcement. The job they've done in Florida has been incredible. And likewise, I'm hearing in Georgia, very good things, Rick. I want to thank you. You're a great governor. He's stepped up in the biggest emergencies, the biggest problems and he gets it done. So Rick Scott, thank you."

The president comes to Florida to witness firsthand the impacts of climate change after telling "60 Minutes" on Sunday that he now believes climate change is indeed not a hoax. Mr. Trump devoted much of his presidential campaign to questioning the science behind human impact on the environment.

"Something's changing and it'll change back again. I don't think it's a hoax, I think there's probably a difference. But I don't know that it's manmade," Mr. Trump told "60 Minutes" correspondent Lesley Stahl. 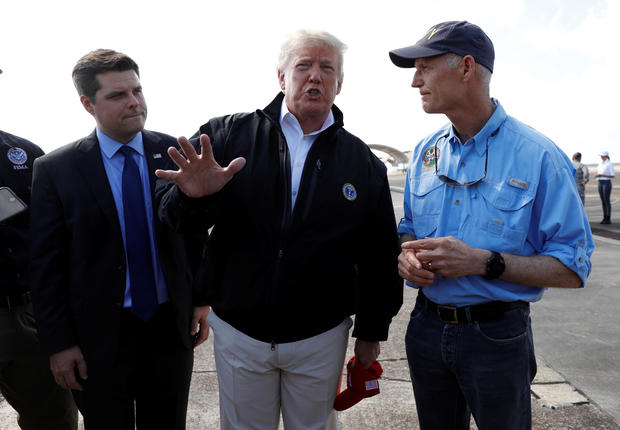 Democrats aim for clean energy standards via the federal budget

“I Alone Can Fix It” authors say former president learned he...