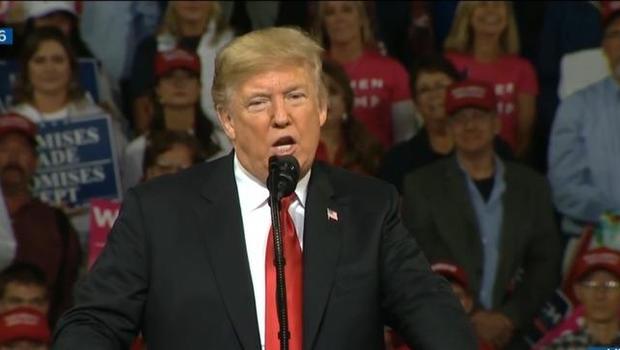 President Trump is meeting with supporters and holding a "Make America Great Again" rally in Lebanon, Ohio, Friday, in his third rally this week. As he ramps up his rallying schedule this month, Mr. Trump is fulfilling his promise to campaign for Republicans around the country ahead of the Nov. 6 midterm elections.

Mr. Trump is likely to stump for Rep. Steve Chabot, a Republican congressman who is facing a tough re-election challenge from Democrat Aftab Pureval. CBS News rates this race as "Edge Republican."

Mr. Trump touted the confirmation of Supreme Court Justice Brett Kavanaugh on Monday. Kavanaugh has become a favorite rally topic for Mr. Trump, as he explains how Democrats are "bad people" because of their opposition to his confirmation. The president also motivates voters by discussing how important his role is in choosing conservative judicial nominees.

"He's done us a great service because we are more energized, as Republicans, than never before," Mr. Trump said about Kavanaugh.

Mr. Trump also noted how his insults against Democrats are often unchallenged.

"I go around saying Democrats are the party of crime, and no one even challenges me," he said.

The president may discuss the return of Pastor Andrew Brunson, who was released from a two-year imprisonment in Turkey. Mr. Trump told reporters before heading to Ohio that he was "very honored" to have Brunson returned to the United States. He also said that Brunson was likely to visit the Oval Office on Saturday. Mr. Trump also echoed talking points from previous rallies. He touted his wife, Melania Trump's, "incredibly successful" tour to Africa this month.

Mr. Trump rallied in Erie, Pennsylvania, on Wednesday, hours after Hurricane Michael made landfall on the Florida Panhandle. He considered postponing his trip due to the hurricane, but told reporters that thousands were probably already lined up for the event in Pennsylvania, so he would go.

At the rally on Wednesday, Mr. Trump said that "all of Pennsylvania, all of America, sends its unwavering love and support" to states under siege from Hurricane Michael. "We just want to wish them all the best, and godspeed, and God bless you all — it's a bad one," Mr. Trump said, adding that the government would "spare no resources" in the aftermath of the storm.

The president hit familiar beats in his rally Wednesday, encouraging voters to turn out by primarily focusing on his administration's victories and warning about potential rule by Democrats. He also tailored some of his common themes to Pennsylvania voters, saying that "we're putting our coal miners back to work, we're putting our steelworkers back to work." He also criticized Democratic Sen. Bob Casey, who is up for re-election this year.

The president also held a rally in Council Bluffs, Iowa, on Tuesday. At this rally he touted his administration's decision to allow fuel containing 15 percent ethanol to be produced year round, a boon to corn-producing states such as Iowa. Mr. Trump also criticized Democratic Sen. Dianne Feinstein, the ranking member on the Senate Judiciary Committee, for holding up Supreme Court Justice Brett Kavanaugh's confirmation, prompting cheers of "Lock her up!" from the rally audience. 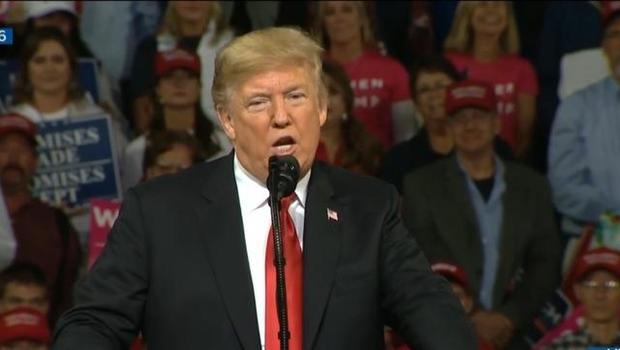 Golfers from the Advocates PGA Tour seize chance of a lifetime...

Ryan Ferguson on life's challenges and “The Amazing Race”