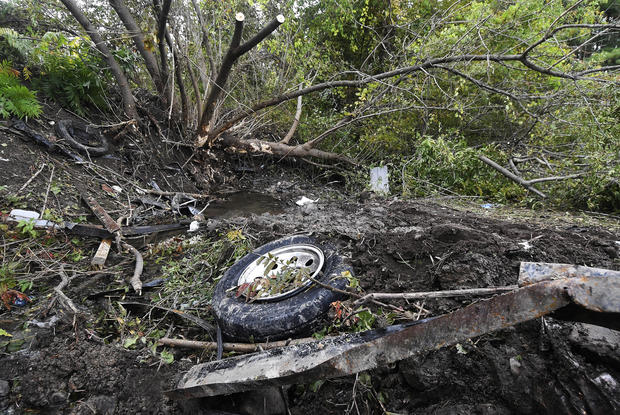 NEW YORK — The owner of a limousine company in the crash that killed 20 people was someone already familiar to law enforcement, but not in the way you might think. The company is owned by Pakistani immigrant Shahed Hussain, according to federal transportation records. Before the tragedy, authorities knew him best as a paid government informant in the investigation of domestic terrorist threats after the Sept. 11 attacks.

Hussain's company, Prestige Limousine, said Monday it is investigating what caused Saturday's crash in Schoharie, New York, and has met with state and federal authorities. A lawyer for the company wouldn't comment further.

New York Gov. Andrew Cuomo said Monday that Prestige Limousine has "has a lot of questions to answer" after the deadly crash. "In my opinion, the owner of this company had no business putting a failed vehicle on the road," Cuomo said while attending a Columbus Day Parade in New York City.

Cuomo said the driver, 53-year-old Scott Lisinicchia, didn't have the necessary commercial license and that the limo had been cut apart and lengthened in a way that violated federal law. He also said the vehicle failed a state inspection that examined such things as the chassis, suspension and brakes.

Twenty people were killed in Saturday's crash, including the driver and two pedestrians. Among the victims were four sisters and three of their husbands. They were celebrating one woman's 30th birthday, according to aunt Barbara Douglas, who lost four nieces in the crash.

"They were wonderful girls. They would do anything for you and they were very close to each other and they loved their family," Douglas told CBS News.

In 2009, the government credited Hussain with rooting out radical Muslims in an elaborate sting at a mosque in Newburgh, a city north of New York. At trial, the jury heard testimony that Hussain was posing as a wealthy representative of a Pakistani terrorist organization.

He drove a BMW and other luxury vehicles provided by the FBI to maintain his cover. He also made hundreds of hours of video and audio tapes of the defendants picking targets for jihad and ranting against Jews. His cooperation resulted in the conviction of four men in a thwarted plot to attack synagogues and shoot down military planes.

But Hussain's work also came under attack by defense attorneys and civil liberties groups as entrapment. They portrayed him as a master manipulator who entrapped a crew of aimless nobodies while earning $96,000 for his work.

Even U.S. District Judge Colleen McMahon said at sentencing that she was not proud of the government's role in the plot.

"I believe beyond a shadow of a doubt that there would have been no crime here except the government instigated it, planned it and brought it to fruition," McMahon said. She added, "That does not mean there was no crime."

According to his own trial testimony, Hussain first entered the U.S. in Texas with his wife and two sons in the 1990s and went to Albany, where he received asylum. In April 2003, he was working as a government translator when he pleaded guilty to a federal fraud charge for helping someone get their driver's license illegally.

He got a sentence that required no more jail time by working as an FBI informant.

Hussain was a central player in an FBI sting targeting an Albany pizza shop owner and an imam who were convicted of money laundering and conspiring to aid a terrorist group. Both defendants said they were tricked by Hussain during the sting, which involved a business loan using money from a fictitious missile sale.

More recently, a botched sting involving Hussain in Pittsburgh became the subject of a documentary called "(T)error." The target described on Facebook how after meeting the informant he had the "feeling that I had just played out a part in some Hollywood movie where I had just been introduced to the leader of a 'terrorist' sleeper cell."

Teen charged in Tessa Majors' death sentenced to 9 years to...

Stars wear “Time’s Up” bracelets at the Golden Globes