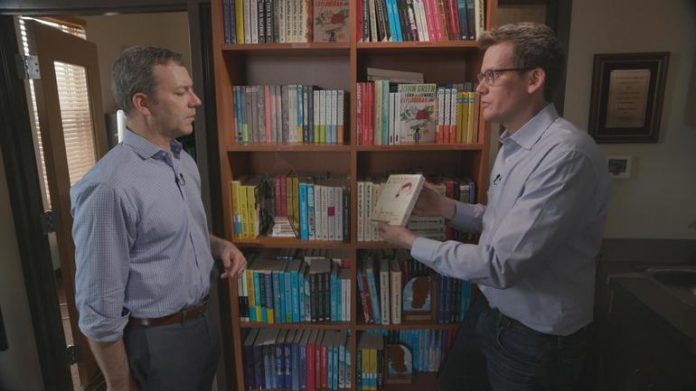 The best-selling author of books like "The Fault in Our Stars," opens up to 60 Minutes about exploring his fears through his writing

While you may not have heard of the author John Green, be assured that the teenagers in your life have. He is America's answer to J.K. Rowling, with his mega best-sellers spawning blockbuster movies. Green has become wildly popular thanks largely to his loyal teenage audience. Green is also the rare literary talent who doubles as a podcaster and a YouTube star.

His success stems from his intuitive understanding of adolescents, his ability to meet them on their level and on their devices. To those who consider today's teens a disaffected tribe, rarely glancing up from their phones and video games, John Green offers a counter narrative.

Jon Wertheim: (LAUGH) It's trending, uh… well, you know. You write a lot about teenagers.

Jon Wertheim: Why this cohort?

John Green: Well, I think sometimes teenagers maybe don't have the language to talk to us in ways that seem compelling to us. And maybe that makes it easy for us to dismiss them or think of them as less intellectually curious or intellectually sophisticated than we are. But I don't think that's true at all.

John Green's books, in the YA — or young adult — genre dominate best-seller lists and while the stories take place in the U.S., They echo worldwide, having been translated into 55 languages.

John Green: Yeah, yeah It's really wonderful to have your books travel to places you've never been. I mean it's a weird but really beautiful experience.

His most famous book, "The Fault in Our Stars," was a best-seller for more than three years.

And adapted to a hit film in 2014 that grossed more than $300 million. Tinged with tragedy, the story follows two teenagers with cancer who fall in love – heavy, and heady stuff for an adolescent audience.

Jon Wertheim: The subjects you deal with are quite weighty. Death and suicide and cancer. A lot of teenagers haven't had these experiences per se, but these books resonate with them. How is that?

One reason he connects so well with teenagers? At age 41, Green is still a kid at heart.

His youthful spirit drives more than book sales. It made him a YouTube star.

In 2007, the early days of YouTube, John Green and his kid brother Hank began sharing videos as a way to stay in touch with each other.

In short order, and in lockstep with the growth of YouTube, the Greens' videos amassed a huge audience, now nearly a billion total views strong. This online video platform in turn fueled John Green's readership.

Jon Wertheim: They play off each other.

John Green: Yeah. In a way, they're different sides of the same coin, right? Because what interests me really is the idea of connecting with a viewer or with a reader without having to like actually talk to them and look at them and all that.

This preference, Green said, is the legacy of his own socially awkward adolescence.

Jon Wertheim: Who do you envision are your readers?

John Green: I think in some ways I'm writing back to my high school self to try to communicate things to him, to try to offer him some kind of comfort or consolation.

Jon Wertheim: Who was that guy?

John Green: I had a difficult time in high school. I wasn't a very good student and I had a lot of self-destructive impulses and I felt scared all the time.

Jon Wertheim: What were you scared of?

John Green: The short answer is everything.

He explores those fears in his most recent book, "Turtles All the Way Down," a best-seller for 50 straight weeks since it debuted at number one. Its theme: obsessive-compulsive disorder, OCD, based on Green's own. For this book, he obeyed that time honored rule of the craft: write what you know.

Jon Wertheim: You use the word "thought spiral." What does that mean?

John Green: The thing about a spiral is that it– it goes on forever, right? Like, if you zoom in on the spiral it can keep tightening forever. And that for me is the nature of obsessive thought that it's this inwardly turning spiral that never actually has an end point. So it might be I'm eating a salad and it suddenly occurs to me that somebody might have bled into this salad. Now, they probably didn't.

Jon Wertheim: This is what you're thinking?

Jon Wertheim: So how do you get out of this coil, and how do you break this infinity?

John Green: I have a few strategies. I exercise. That's probably the biggest thing. Exercise is pretty magical in my life. I don't enjoy it. (LAUGH) I don't relish the thought of going for a run but it is very helpful because I can't think.

John Green lives in Indianapolis, where his life comes short on stress, long on anonymity. He and his wife, Sarah Urist Green, a curator and online art educator, are parents of a son, age 8, and daughter, 5. Sarah began reading his manuscripts when they started dating 14 years ago.

Sarah Green: And I was really nervous because I really liked John, and I knew that if the book was bad it wasn't gonna work. (LAUGHTER)

Sarah Green: No, no. The book might have worked or not, but I couldn't be dishonest about, about that and if I didn't like it, sorry.

John Green: I mean, I'm super glad I didn't know that at the time. (LAUGHTER) I don't think I coulda handled that pressure.

Jon Wertheim: John, do you remember when you told Sarah about your OCD?

John Green: I don't know that it was an event so much as it was a process. And part of getting to know me was understanding that I had problems with anxiety.

Sarah Green: There was never a moment where John kind of sat me down and said, "I have OCD." Um, it was more of a gradual process– where we were able to kind of put this label on it. And so I can't say that I would ever wish it to go away, because it's a– it's a part of him.

So much so that, in 2015, fresh off the spectacular success of "The Fault In Our Stars," Green decided to take a chance and go off the anti-anxiety medication he'd been taking for years.

Jon Wertheim: Why did you do that?

John Green: Well, 'cause I bought into this old romantic lie that– in order to write well– you need to sort of, like, be free from all of these mind-altering substances or whatever. And the consequences were really dire, unfortunately. And– and I– I'm lucky that they weren't catastrophic, but they were serious. And coming out of that experience I found myself wanting to try to give some sort of form or structure—um, to this fear that I had lived with for my– most of my life.

These John Green fans call themselves "Nerdfighters" – part of a community that now includes hundreds of thousands of members around the world. The Nerdfighters formed in response to green misreading the name of a video game, "Aerofighters."

John Green: A Nerdfighter is a person who fights for nerds.

Jon Wertheim: Not against nerds?

Jon Wertheim: These are empowered nerds.

John Green: Yeah. Obviously we're pro-nerd. (LAUGH) Really what it's about is being enthusiastic. Being nerdy is really about how you approach what you love.

Jon Wertheim: All five of you, proud, unapologetic nerds.

Ben: We take the name with pride.

We met these Nerdfighters last June. They were attending the ninth annual VidCon, a YouTube conference John and Hank Green created to help online video fans and creators meet in person. These five told us they were especially grateful to John Green for writing about his anxiety in "Turtles All the Way Down."

Becky: It's reassuring for sure.

Jack: For someone who does experience anxiety, he like, articulates things I could never articulate before. Which both, like, makes me feel seen but also helps me, like, understand and sort of, you know, feel better from different things.

Presley: Yeah, there's this metaphor of a spiral in the book, and that was one of the most useful things I've ever come across in describing my own anxiety. And we use it in the house all time. And being around this community of people that was so loving really made me grow to be a better person than I would have without it.

Presley at seven years old: I am a homeschooled child… and you all are my favorite teachers.

This was her – Presley Alexander – when she was just seven years old and she first came into the John Green orbit, not by reading one of his books but by watching him on Crash Course, the educational YouTube series that he started with his brother Hank in their manic signature style.

The videos offer lessons in the humanities and sciences with more than eight million subscribers, they are now offered as part of the curriculum in classrooms around the country. On account of his popularity across platforms, Green cuts a figure he never would have imagined when he was a teenager: something akin to a rock star.

Jon Wertheim: I want to know what your high school self would have thought if– if they saw you now.

John Green: Uh, my high school would be very– very happy and excited. (LAUGH) I'm embarrassed to admit. Uh, I wish that weren't the case.

The Green brothers are exceptionally supportive of each other, especially when it comes to John's OCD – described so vividly in his latest book.

Jon Wertheim: "Turtles All The Way Down." What was it like for you to read that?

Hank Green: It did help me understand John better. And– and, but– but in general be more empathetic toward people who deal with anxiety and OCD.

Jon Wertheim: What'd you learn about him?

Hank Green: The extent to which sometimes he is at the mercy of his own mind.

Jon Wertheim: But did it cause you to reexamine or reassess moments in your childhood?

Hank Green: Yeah, I mean, there– there have definitely been times in, you know, when John had a less stable life where I think, like, the family was worried about him. You know, those, the– the–

Lately, there's a lot less to worry about. With his multimedia, multimillion-dollar empire, John Green is using his pen, his keyboard and his video camera to normalize teenage social awkwardness and also to destigmatize mental illness.

Jon Wertheim: You've said that it's important for young people to be able to see successful, productive adults challenged by mental illness.

Jon Wertheim: Expand on that. 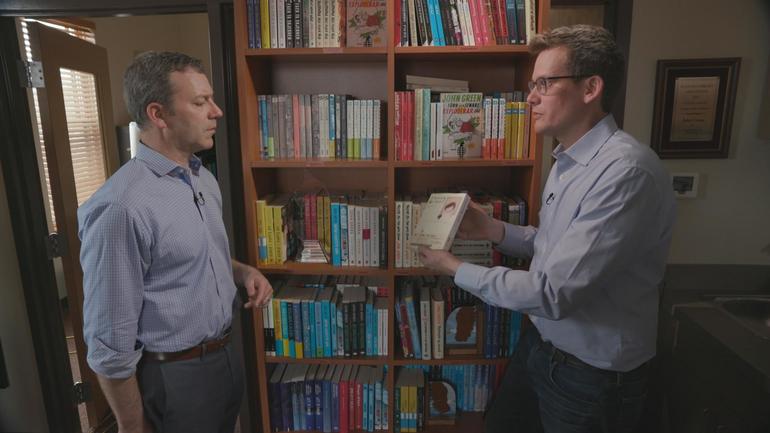 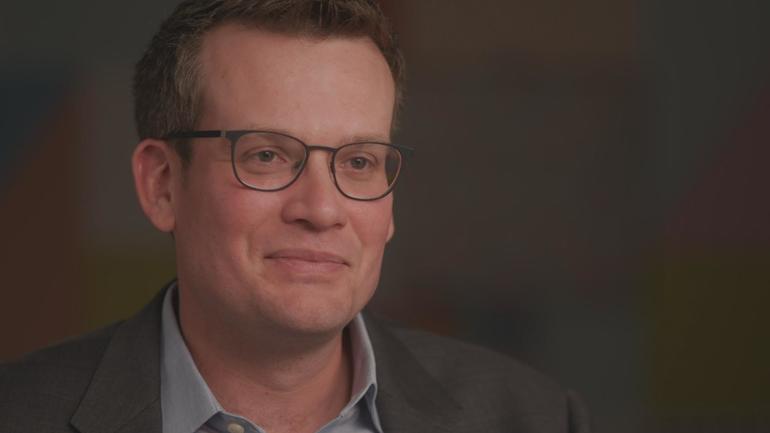 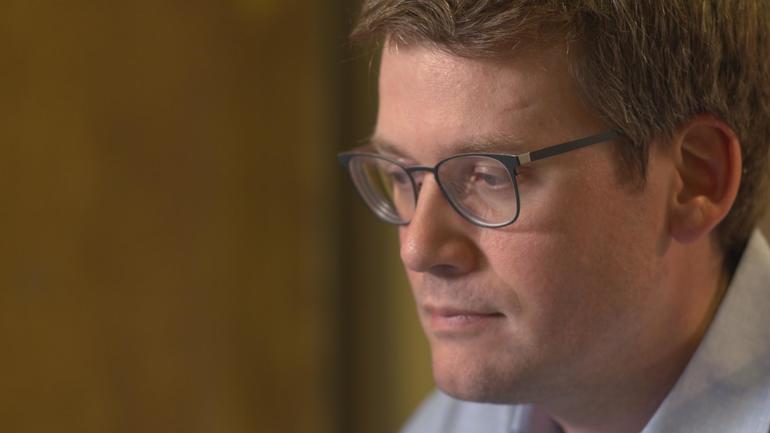 Closing the gender gap in the tech industry