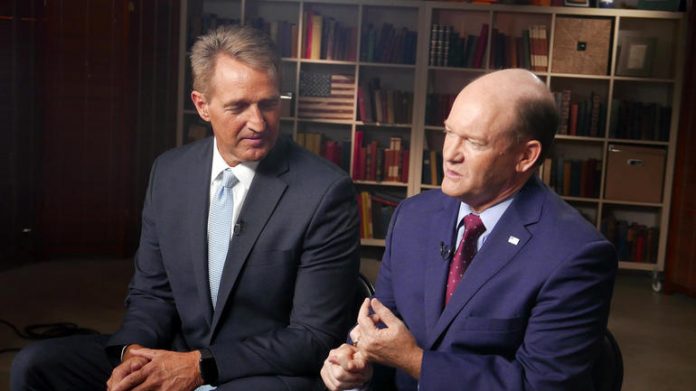 Sen. Jeff Flake explains why he insisted on a week-long FBI investigation into the allegations of sexual assault against Brett Kavanaugh. 60 Minutes spoke with Flake and other members of the Senate Judiciary Committee about the drama on Capitol Hill last week

Millions of Americans couldn't turn away from a political spectacle that no one wanted to see. Last week, the United States Senate was riven by fury over the Supreme Court nomination of Brett Kavanaugh. In the hearing room, two great forces dominating our society collided: the "Me Too" movement against sexual harassment and violence and hyper-partisan politics. Friday, as the Senate descended into chaos, one Republican and one Democrat found a way forward with an old technique that seemed long forgotten: compromise.

Tonight, in their first interview since the vote, those senators, Republican Jeff Flake of Arizona and Democrat Chris Coons of Delaware sit down with us. It was Republican Flake who forced his party to accept a one week FBI investigation into the assault allegations against Judge Kavanaugh.

Sen. Jeff Flake: I don't think anybody expected, you know, what happened on Friday to happen. And I can't say that I did either. I just knew that we couldn't move forward, that I couldn't move forward without hitting the pause button. Because, what I was seeing, experiencing, in an elevator and watching it in committee and just thinking, this is ripping our country apart.

Scott Pelley: What happened in the elevator?

Sen. Jeff Flake: (LAUGHS) People felt very strongly about the hearings and what was going on.

Woman to Flake in elevator: What you are doing is allowing someone who actually violated a woman to sit on the Supreme Court. This is not tolerable.

Flake had just announced that he would vote for Kavanaugh. The people who felt so strongly were activists Ana Maria Archila and Maria Gallagher who told Flake they were survivors of sexual assault.

Woman to Flake in elevator: Look at me and tell me it doesn't matter what happened to me.

Sen. Jeff Flake: They were clearly passionate and determined that I hear them.

Christine Blasey Ford at hearing: I believe he was going to rape me, I tired to yell for help.

Christine Blasey Ford at hearing: This is what terrified me the most and has had the most lasting impact on my life. It was hard for me to breathe and I thought that Brett was accidentally going to kill me.

Dr. Christine Blasey Ford testified that Kavanaugh sexually assaulted her when they were in high school.

Sen. Dick Durbin at hearing: With what degree of certainty do you believe Brett Kavanaugh assaulted you?

Democrat Chris Coons and Republican Jeff Flake listened from opposite ends of the dais, separated by party. But in truth, they were much closer. They had struck up a friendship over the years that bridged mere politics.

Sen. Chris Coons: I'm hearing a very smart anguished person who did not want to be testifying in front of us and meanwhile my phone is just blowing up. It was stunning the number of people I heard from during the hearing. That– It was almost hard to know which to listen to more because the things coming in were so striking.

Scott Pelley: And they were saying what?

Sen. Chris Coons: "You've known me a very long time and I was raped as a child and I have never told anyone before right now and I'm sharing it with you."

Scott Pelley: There's another stream of testimony coming into you at the same time?

Sen. Chris Coons: In the case of the folks I am referring to, powerful testimony from people I know and trust, who had never shared these stories with me before.

Sen. Jeff Flake: It was just that palpable feeling that this was history and she was compelling. Just extremely compelling and I think everybody said that on both sides.

Scott Pelley: You did or did not believe her?

Judge Brett Kavanaugh at hearing: This whole two-week effort has been a calculated and orchestrated political hit revenge on behalf of the Clintons. And millions of dollars and money of outside left-wing opposition groups.

Scott Pelley: I'd like to ask both of you what you made of Judge Kavanaugh's very emotional response and what it may or may not say about his judicial temperament. Does this man belong on the Supreme Court?

Sen. Chris Coons: He had exchanges with Senator Feinstein, with Senator Klobuchar, with others, that I thought went over a line. He was clearly belligerent– aggressive, angry.

Scott Pelley: Made you wonder about his suitability?

Scott Pelley: But Sen. Flake, you identified with it. You understood–

Sen. Jeff Flake: Well, it did– it seemed partisan. But boy, I had to put myself in that spot. And– you can– you can understand why he was angry. And you know, I think you give a little leeway there.

Scott Pelley: When Judge Kavanaugh came out swinging what was that moment like for you?

The judiciary committee's Democrats include Sheldon Whitehouse of Rhode Island and Mazie Hirono of Hawaii.

Sen. Mazie Hirono: One of the most astounding things that Judge Kavanaugh did was to blame the Democrats for some kind of conspiracy that went on. That we had been plotting all of this, although, thank goodness that he acknowledged that Dr. Ford was not a part of that conspiracy that she had no political motive.

Sen. Sheldon Whitehouse: It was really quite astonishing how the tone in the room changed when Judge Kavanaugh came out explosively– confrontational.

Judge Brett Kavanaugh at hearing: This confirmation process has become a national disgrace.

Sen. Lindsey Graham at hearing: What you want to do is destroy this guy's life.

Sen. Sheldon Whitehouse: …and then Lindsey Graham burst out…

Sen. Lindsey Graham at hearing: You said that!!!

Sen. Sheldon Whitehouse:…and just went on his own explosive statement.

Sen. Lindsey Graham at hearing: This is going to destroy the ability of good people to come forward because of this crap!

Sen. Sheldon Whitehouse:We're not just entirely logical people. There are animal spirits in humans, and that's true in senators.

Sen. Orrin Hatch at hearing: This man is not a monster!

Sen. Sheldon Whitehouse:And so when somebody goes into the breach in full-on battle mode, if they're not making a fool of themselves, it's a rallying point. And I think you saw that happen in the room.

Sen. Lindsey Graham at hearing: To my Republican colleagues…

Sen. Lindsey Graham at hearing: If you vote no, you're legitimizing the most despicable thing I have seen in my time in politics.

Scott Pelley: She said it was Brett Kavanaugh, 100 percent.

Sen. Graham worries that the Senate's constitutional role of "advice and consent" is no longer about the nominee, it's about the careers of the senators.

Sen. Lindsey Graham: The politics of voting for the Supreme Court nominees are now about you. It's not about the nominee. It's not about the law. It's about how does it affect you. And you can't blame the Democratic Party for that. Both of us got here. And I don't know if we'll ever get out, but I do not, I don't wanna go where we're headed.

Democrat Chris Coons saw the testimony wearing on his friend Republican Jeff Flake and hoped to convince his colleague to compromise on Kavanaugh.

Sen. Chris Coons: I was outside the hearing room, probably, about the same time he was having that conversation in the elevator. And a reporter showed me that Jeff had announced he was gonna vote for Kavanaugh. And I was very upset, I mean, hugely distraught by that, because I was still hoping there might be some moment here.

Despite Flake's announced support of Kavanaugh, Coons tried to offer a compromise: the week-long investigation to be led by the FBI.

Sen. Chris Coons at hearing: And I have conveyed to my friends and colleagues that I had wished we would take a one-week pause, one week only.

Scott Pelley: When you were making that compromise proposal, you were lobbying your friend, Sen. Flake. You didn't expect to change the minds of other Republicans. You were trying to change one mind.

Sen. Chris Coons: I was, principally, concerned about helping my friend listen to his doubts and his conscience.

Changing one mind was enough because with the Senate divided so narrowly the Republicans could hardly afford to lose Flake.

Sen. Chris Coons: And I cannot tell you how grateful I am. Jeff's the hero here. He's the person who– wanted a moment just to– just to, you know, go over, what are the legitimate concerns and grievances by Republicans on the committee about the process and the complaints and how we got here?

After Democratic Sen. Coons floated his compromise, Republican Jeff Flake stood up and walked from the Republican side of the dais to the Democratic.

Scott Pelley: Sen. Coons, there is a moment in the hearing in which Sen. Flake walks by, essentially taps on your shoulder and the two of you walk-out. What happened when you walked out of the room?

Sen. Chris Coons: I followed Jeff into the anteroom and he said very intently, "This is tearing our country apart." We have to do something.

Sen. Chris Coons: Eventually we literally had the whole, the whole committee crammed into this tiny, little hallway and my recollection was Jeff, at one point says, "OK I want to talk to Chris." And we went into, literally a phone booth that we can barely fit in talking to another senator and there's this whole committee right outside.

Sen. Jeff Flake: What are they saying?

Scott Pelley: Looking in on the phone booth wondering what's goin' on in there?

Sen. Jeff Flake: it was quite a moment.

Sen. Jeff Flake: No, not a chance

Scott Pelley: Not a chance?

Scott Pelley: Because politics has become too sharp, too partisan?

The Senate Judiciary Committee says the FBI will look into "current and credible" allegations. One witness who did not appear before the committee is Kavanaugh's teenage friend Mark Judge, who Ford said was in the room during the alleged assault.

Sen. Jeff Flake: And he has indicated apparently that he is ready to cooperate.

Scott Pelley: But what he said in his letter to the committee was that he just couldn't remember.

Sen. Jeff Flake: The FBI during their investigation will ask questions that maybe will prompt things or there's I think Dr. Ford said there was somebody she couldn't remember the name of. It's possible that one of the others they interview say, well no, this was the name. And it will lead to additional interviews that can take place as well.

Friday, the Judiciary committee passed Kavanaugh's nomination to the full Senate. In a week the FBI investigation is expected to be given to all 100 senators. And a vote is likely to be scheduled soon after.

Scott Pelley: What are the chances that we are going to be in exactly the same place a week from now?

Sen. Jeff Flake: There's a chance and we knew that. And some of our colleagues said that, "We'll be back here one week from now. It'll be worse." There will be other outrageous allegation that come forward, the FBI will talk to people who don't want to talk anymore. We won't be any better off. There is a chance that that will happen. I do think that we can make progress.

Scott Pelley: If Judge Kavanaugh is shown to have lied to the committee, the nomination is over? 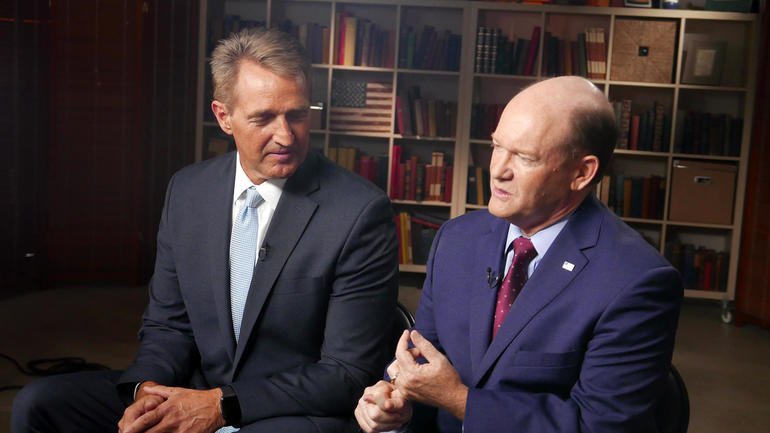 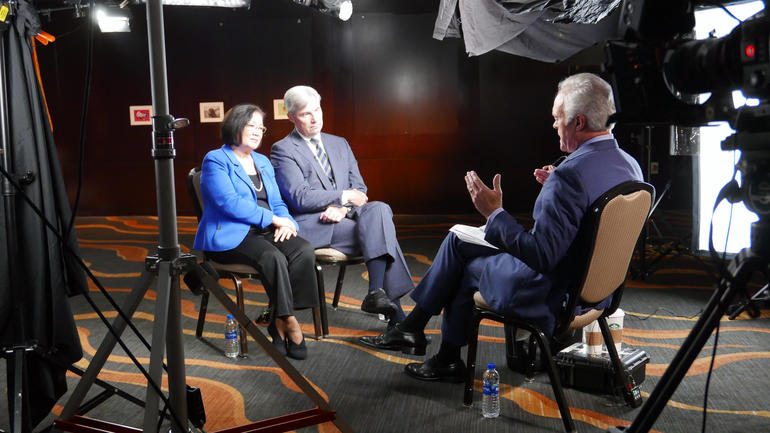