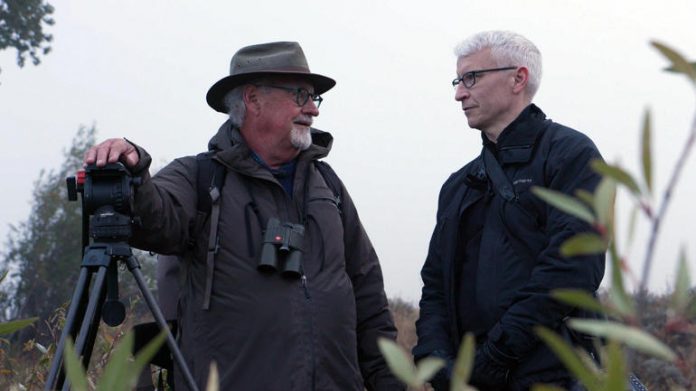 Tonight we are going to take you into the wild with a remarkable photographer who's spent his life on the trail of elusive and endangered animals. His name is Tom Mangelsen, and at 72 he still travels to remote and inhospitable places. As we first showed you last spring, what he brings back, are some of the most spectacular pictures of wild animals you'll ever see.

On most mornings for nearly 50 years, this is what Tom Mangelsen has done. He's ventured into the wilderness, camera in hand.

Last September, in Grand Teton National Park in Wyoming, he waited in an early autumn snowfall for his subject to appear.

As is often the case, it took quite a while.

Anderson Cooper: Over the course of your lifetime, the amount of time that you've spent waiting is, incalculable, I mean, sure.

Anderson Cooper: Have you learned anything with all that waiting?

Tom Mangelsen: You wait long enough, it does pay off.

For Mangelsen, it usually does…

Whether it's a male grizzly bear with battle scars, a cheetah chasing down its prey in Tanzania, or butterflies sipping on the tears of a giant caiman in Brazil– each of Mangelsen's photographs tells a story.

His images have documented species like mountain gorillas, black rhinos and jaguars — once dominant, now in danger.

On every continent, in every season, no matter the conditions, Mangelsen has painstakingly built a reputation — not on personality, but on patience.

Anderson Cooper: Do you like animals more than people?

Tom Mangelsen: Well, not you.

He especially likes the dangerous kind. In a jungle in India, where it would be deadly to be on foot, Mangelsen climbed onto an elephant's back for a shot of a Bengal tiger — paws red, fresh from a kill.

In the Arctic, where temperatures can be 30 degrees below zero, he's spent years documenting the behavior of polar bears. He nicknamed this group "the bad boys of the Arctic." He's captured adult male bears play fighting, a mama bear slyly keeping watch as her cubs rough-house nearby and a group of bears trying to survive as their world melts away.

People often mistake Mangelsen's photographs for paintings, and since the 1970's he's sold them out of galleries, like this one in Jackson, Wyoming.

His photo — "Catch of the Day" — is often called "the most famous wildlife photograph in the world."

Anderson Cooper: It's such an extraordinary image. In this day and age, people would think that this is Photoshopped, that– that you got a photo of a fish somewhere and, I mean, it's so perfect.

Tom Mangelsen: It was taken in 1988, before Photoshop even existed.

Anderson Cooper: But you don't, you don't believe in that, I mean, as a photographer?

Tom Mangelsen: No. Man. That's, this is the magic. This is the moment. This is the decisive moment, and this little tiny space right here I think is so important. Just that, you know, quarter of an inch.

Anderson Cooper: It's in its mouth, but it hasn't actually made contact yet with its mouth?

Mangelsen shuns the use of digital manipulation. What he sees through his lens, is what you get.

And at a time when many photographers build their portfolios by going to game farms like this one to photograph captive animals, Mangelsen insists on only documenting them in their natural habitat.

Tom Mangelsen: OK, Anderson, let's see what we can find.

As we saw when we joined him before dawn outside Jackson Hole.

Anderson Cooper: You always get up this early?

Tom Mangelsen: There is only one way to do it is I do it every day, or be really lucky.

He's taking us to a bend he knows on the Snake River.

Tom Mangelsen: Do you hear the elk? It's a sharp whistle.

Tom Mangelsen: Yeah, That's the sound of the wild here.

He's been here hundreds of times, trying to get the perfect shot of elk crossing the water.

Anderson Cooper: So now it's just waiting, a waiting game?

Anderson Cooper: What's the longest you've ever spent in any spot in, not here, but anywhere?

Tom Mangelsen: Well, I went home at night and slept and then would go back at daybreak.

Anderson Cooper: But you would spend all day there?

Anderson Cooper: So 12 hours a day?

Anderson Cooper: Did you get the shot?

The shot was worth waiting for — the elusive cougar coming out of her den at dusk. Taken in 1999, it's among the first photographs to document the life of a wild, female cougar. It helped launch a movement to protect the cats against human encroachment.

Back at the river, after a three-hour wait…

Tom Mangelsen: There, right between the trees.

Tom Mangelsen: There she comes.

Tom Mangelsen: Well, that was…

Anderson Cooper: That was cool.

Anderson Cooper: That was great.

Anderson Cooper: That was worth the wait.

Tom Mangelsen: I think it's beautiful.

Tom Mangelsen: I think it's gorgeous–

Anderson Cooper: Yeah, I think– yeah, me too, actually.

Tom Mangelsen: There's nothing wrong with that one at all. It's great.

Anderson Cooper: Is she out of focus?

Mangelsen's shot was, of course, in perfect focus.

And look at what else he has captured at that same river in fall, summer, and winter.

Mangelsen credits his father with his love of the wild. He grew up on the bank of the Platte River in Nebraska – where he was schooled in hunting and fishing. As a teenager in the 1960's, Mangelsen earned the title, "World Champion Goose Caller." No small feat, considering this is bird country — home to 400 species, as well as one of the great migrations on earth.

Every spring half a million sandhill cranes stop on this stretch of the Platte River. They're fattening up on grain before migrating north, as far as Siberia. It is an awesome and ancient ritual – fossils show cranes have come here for nearly ten million years.

It's a spectacle of sight and sound Mangelsen has shared for 17 years with his friend and ally Jane Goodall, whose life's work with chimpanzees has revolutionized our understanding of primates. Today, Goodall and Mangelsen team up to raise money and awareness for the protection of cranes, as well as chimpanzees and cougars.

Jane Goodall: He's taught me so much about the Platte River and what goes on here and what it was like when he was a boy, and how he started off as a hunter because that's what one did, and then how, gradually, he realized he loved these creatures much too much, he couldn't go on being a hunter. And so he hunts with his camera.

Tom Mangelsen: Look at the light on those up there.

Jane Goodall: What's amazing is this ancient migration still carries on. And I think it's completely amazing.

Jane Goodall: It gives me hope that nature will manage in spite of us.

Jane Goodall: Next year do you think you can invest in a silent camera?

Jane Goodall: One of the qualities that I love about Tom is his passion. And it's when you have that kind of passion and that kind of commitment that you're more likely to get other people involved. Because it, we can never win an argument by appealing to people's heads. It's got to be in the heart. And I use the power of storytelling and writing. And Tom uses the power of images.

If all artists have a muse, Tom Mangelsen's is this 22-year-old female grizzly bear. She doesn't have a proper name, but is known by the research number 399. A creature from America's wild past when 50,000 grizzlies roamed the lower 48. Less than 2,000 grizzlies remain today.

For more than a decade Mangelsen has chronicled every facet of 399's life: emerging from a long winter's nap, swatting magpies away from a meal. He has watched and worried as she's given birth to three sets of triplets and a set of twins. She's nursed, protected and taught more than a dozen bear cubs. Mangelsen's photographs, including this one he dubbed "An Icon of Motherhood" have made 399 the most famous grizzly in the world.

Anderson Cooper: What do you think it is about grizzly bears that so captures people's imagination?

Tom Mangelsen: I think it's the wildness and the rarity. And then you see how intelligent they are. You know it's like 399, we'll go to the road and she'll look both ways. She'll tell the kids to stay on one side of the road. She'll go across and then she'll talk to them. "Okay, you can come across now." I mean, that's smart.

Anderson Cooper: There's also something about grizzly bears. There's a grace to it. But ferocity is, is always lurking there.

Tom Mangelsen: But I like that idea. That we're not the top of the food chain.

In Mangelsen's portraits, ferocious grizzlies have personalities too. But sometimes it's easy to miss the details. Notice a leftover piece of grass tucked in the corner of this grizzly's mouth, like a toothpick.

But it's Mangelsen's wide shots that may matter the most. They help people understand animals like 399 can't survive without their habitat. Mangelsen took us out to show us why he believes seeing your first grizzly can change your life.

Anderson Cooper: It's right there.

Tom Mangelsen: It's right there.

It was an adult female grizzly, resting just off the road.

Anderson Cooper: It's so incredible to see. It's amazing.

A third of 399's offspring have been killed in interactions with humans – hit by cars or shot by elk hunters out of fear.

Last year, the grizzlies around Yellowstone were removed from the endangered species list. But planned hunts in Wyoming and Idaho are on hold while a judge decides if the bears should remain protected.

Tom Mangelsen: There's people here who have said that they can't wait for a season to open so they can shoot 399 because that would be the biggest prize, the biggest trophy.

Anderson Cooper: You've had hunters actually say that to you? That they want to shoot 399?

Anderson Cooper: Because 399 is so famous?

While he worries about what will be lost, Tom Mangelsen is determined to show us the beauty and fragility of what still survives. And so he sets out once again, patiently making his way, alone, into the wild. 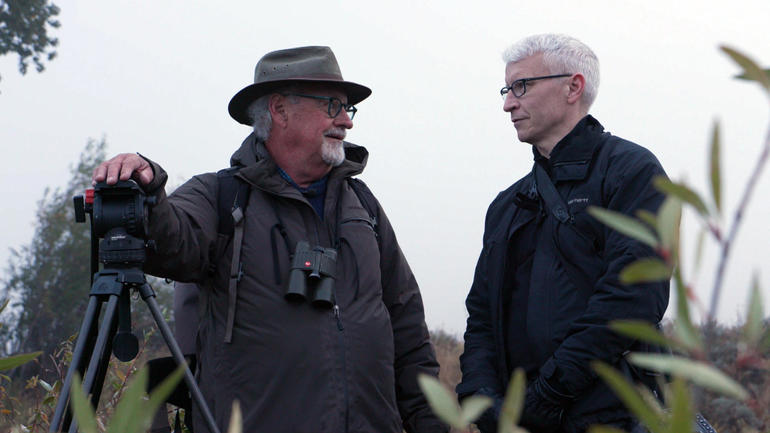 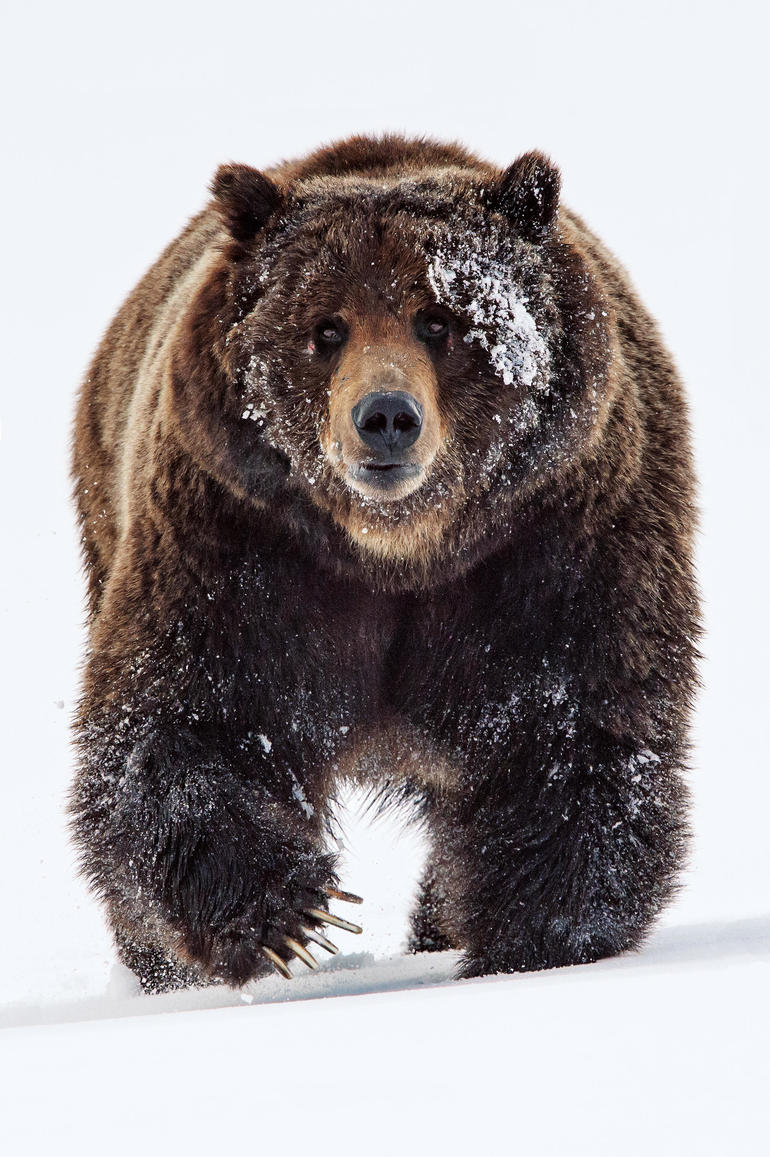 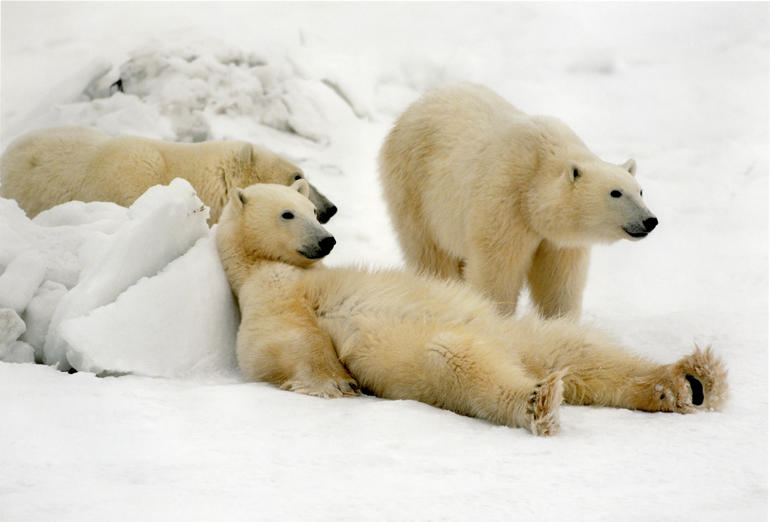 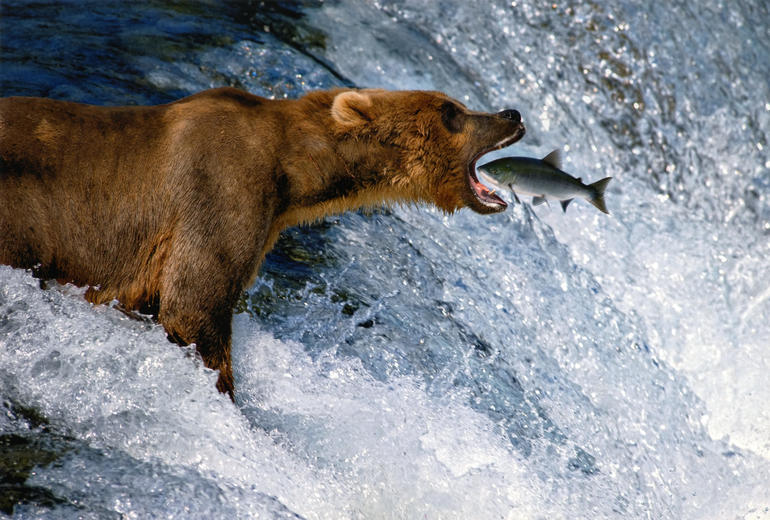 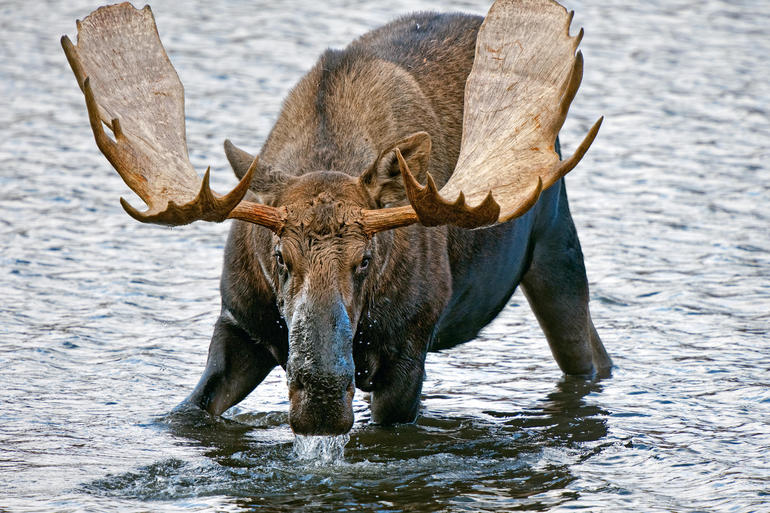 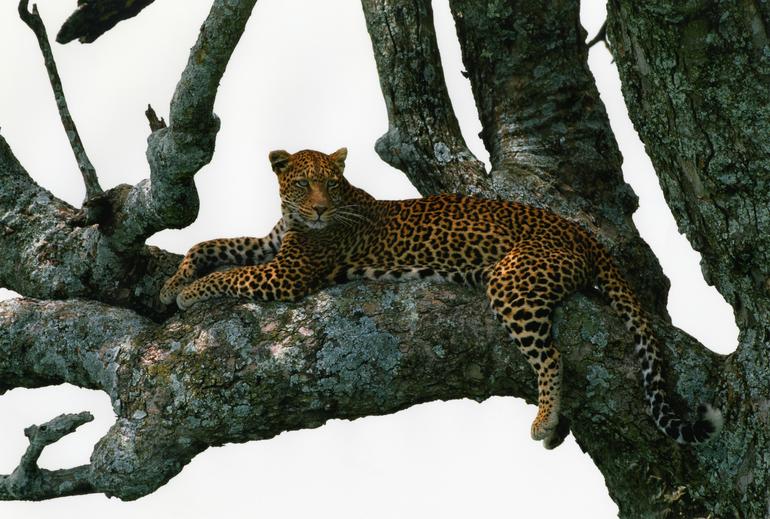 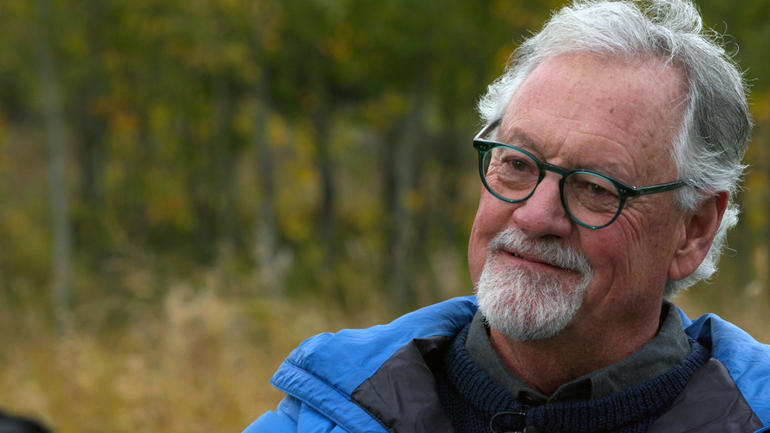 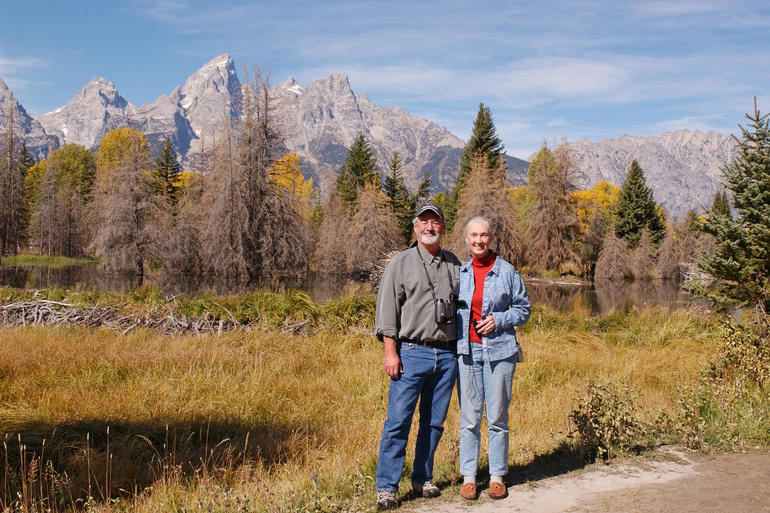 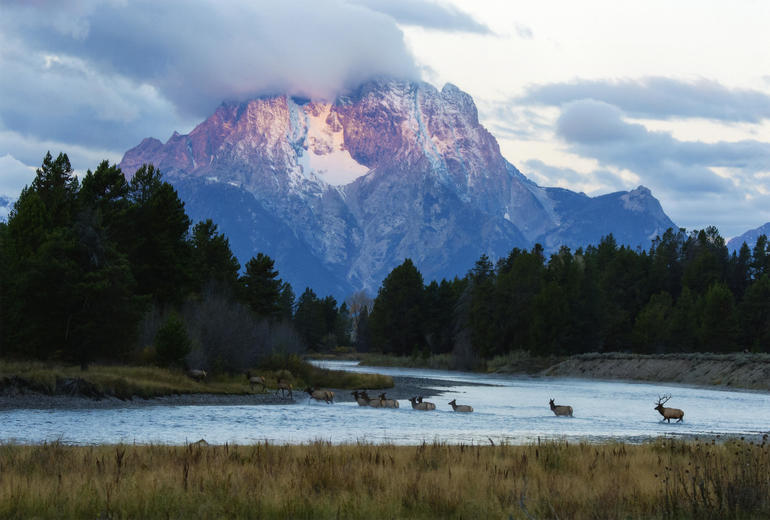 Mireya Villarreal reflects on values that have guided her reporting of...

Man at the center of Navy corruption scandal speaks

Bitcoin mining and its environmental costs