MIDDLETON, Wis. — The gunman in a Wisconsin workplace shooting was taken to a mental health hospital and barred from possessing firearms in 2004 after telling South Dakota police he thought co-workers were "talking bad about him," according to court records.

Anthony Tong also told investigators he believed his neighbors were spying on him when officers were called to his Sioux Falls apartment to investigate a disabled fire alarm in his home.

Tong, who was fatally shot by police after opening fire on his co-workers Wednesday at a software company in Middleton, had lived in South Dakota until last year.

Middleton Police Chief Chuck Foulke said during a news conference Friday that Tong had no criminal history but did have "contact" with police in South Dakota in 2004 that involved a mental health issue. Foulke cautioned against concluding that mental health was an issue in the Wednesday shooting at WTS Paradigm's Middleton headquarters, in which three people were seriously wounded and a fourth suffered a graze wound.

In the South Dakota case, a detective said in an affidavit that Tong initially wouldn't let officers inside his home but acknowledged he had disconnected the fire alarm. He eventually let officers inside his apartment, where they found ceiling fans, lights and smoke detectors dismantled. Tong told police he disabled the electronics because he thought residents in the apartment below him were eavesdropping on him.

Officers handcuffed Tong for their own safety because Tong was acting delusional and paranoid, according to court documents. They seized a pistol in his belt as well as an AR-15 rifle and ammunition in a bedroom.

Tong also told police that people at work were "talking bad about him" but refused to explain. He was taken to a mental hospital for 24 hours. A state judge revoked his concealed carry permit that November, stripping him of his right to possess firearms.

The police chief said the Bureau of Alcohol, Tobacco, Firearms and Explosives was trying to track down the origin of the 9mm semiautomatic pistol used in the Wednesday attack at the company — but was running into problems with the trace.

"There's something unique about that weapon that they're having trouble finding out where it came from and what hands it passed through," Foulke said, declining to elaborate.

Authorities also said Friday that the conditions of the three seriously wounded workers had improved. The woman and two men have been upgraded from serious to fair condition at University Hospital in Madison, according to UW Health.

Police don't know if the victims were targeted or shot at random. Their names haven't been released.

Officers were called to WTS Paradigm in Middleton, a Madison suburb of about 17,440 people, just before 10:30 a.m. on Wednesday. A developer at the company described hearing shots fired, and what he did when he heard them. Drew Beatty said he heard several loud bangs while he was sitting at his desk, CBS affiliate WISC-TV reported. "At that time I didn't really process what was happening," he said.

Foulke said officers arrived within 8 minutes of receiving emergency calls and found a man wielding a semiautomatic pistol. Foulke said the man was also carrying extra magazines. Two Middleton officers and two Dane County sheriff's deputies exchanged gunfire with Tong, killing him. The officers and deputies were not hurt, according to police.

WTS Paradigm makes software for the building products industry. A Wisconsin State Journal profile from 2014 listed company employment at about 145 workers and noted the company was looking to move to a larger location at the time. 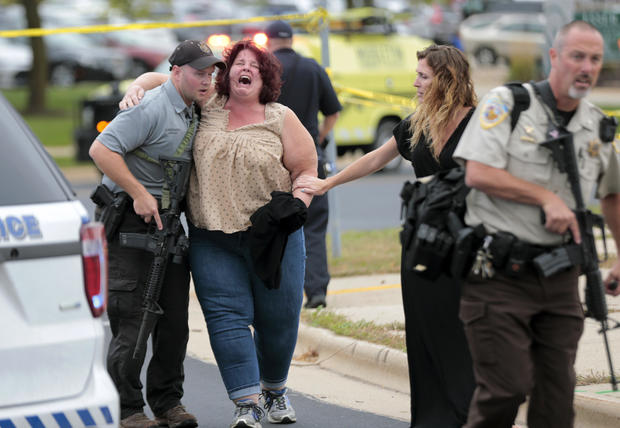 Northern lights to shine across northern US Saturday