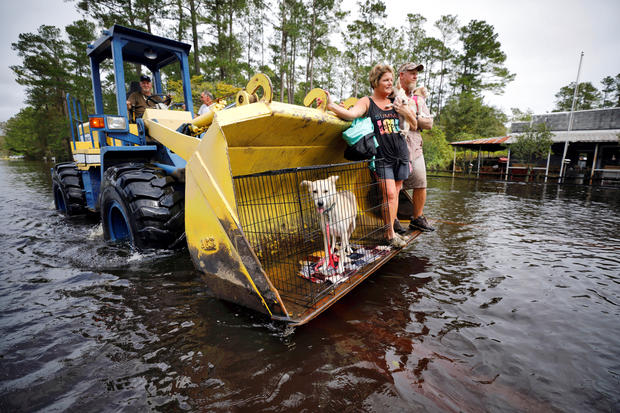 TRENTON, N.C. — When meteorologists downgraded Hurricane Florence from a powerful Category 4 storm to a Category 2 and then a Category 1, Wayne Mills figured he could stick it out. Now, he regrets it.

The Neuse River, normally 150 feet away, lapped near his door in New Bern, North Carolina, on Sunday even as the storm had "weakened" further.

People like Mills can be lulled into thinking a hurricane is less dangerous when the rating of a storm is reduced. But those ratings are based on wind strength, not rainfall or storm surge — and water is responsible for 90 percent of storm deaths.

Several meteorologists and disaster experts said something needs to change with the rating system, the 47-year-old Saffir-Simpson Hurricane Wind Scale, to reflect the real risks in hurricanes. They point to Florence, last year's Hurricane Harvey, 2012's Sandy and 2008's Ike as storms where the official Saffir-Simpson category didn't quite convey the danger because of its emphasis on wind.

"The concept of saying 'downgraded' or 'weakened' should be forever banished," said University of Georgia meteorology professor Marshall Shepherd. "With Florence, I felt it was more dangerous after it was lowered to Category 2."

It was a lowered category that helped convince Famous Roberts, a corrections officer from Trenton, to stay behind. "Like a lot of people (we) didn't think it was actually going to be as bad," he said. "With the category drop … that's another factor why we did stay."

Once a storm hits 74 mph it is considered a Category 1 hurricane. It ratchets up until it reaches the top-of-the-scale Category 5 at 157 mph.

Florence hit as a Category 1 with 90 mph winds — not a particularly blustery hurricane — but so far it has dumped nearly three feet of rain in parts of North Carolina and nearly two feet in sections of South Carolina.

"There's more to the story than the category," University of Miami hurricane researcher Brian McNoldy said. "While you may still have a roof on your house because 'it's only a Category 1,' you may also be desperately hoping to get rescued from that same roof because of the flooding."

Susan Cutter, director of the Hazards and Vulnerability Research Institute at the University of South Carolina, said the hurricane center and National Weather Service "have not done a good job at communicating the risks associated with tropical systems beyond winds."

One reason, she said, is that it's much harder to explain all the other facts. Wind is easy.

The National Oceanic and Atmospheric Administration (NOAA) said it takes all hazards, including rain and storm surge seriously — and communicates them. Forecasters were telling people four or five days before Florence hit that it would be a "major flooding event," said Bill Lapenta, director of NOAA's National Centers for Environmental Prediction, which includes the hurricane center.

When Florence's winds weakened and it dropped in storm category, he said, "We made it very clear that in no way shape or form that this is going to reduce the impacts in terms of flooding and surge."

Shepherd, a former president of the American Meteorological Society, said the weather service did a great job at forecasting and made a good attempt at communicating the risk. But somehow the message isn't quite getting through, he said.

It didn't to Wayne Mills. If the storm stayed a Category 4, Mills said, "I definitely would have left."

Cutter and Shepherd said the weather service needs to work with social scientists who study how people react and why. Laplenta said his agency does that regularly and will do more after Florence.

It's only going to be more necessary in the future because global warming is making hurricanes wetter and slower, so they drop more rain, Shepherd said.

University of Alabama's Jason Senkbeil, who studies the intersection of meteorology and social science, is working on two different new hurricane scales using letters to describe danger or potential damage. Florence would be an "Rs" for rainfall and storm surge.

But Famous Roberts now knows it is: "I would say for everybody to take heed. And don't take anything for granted." 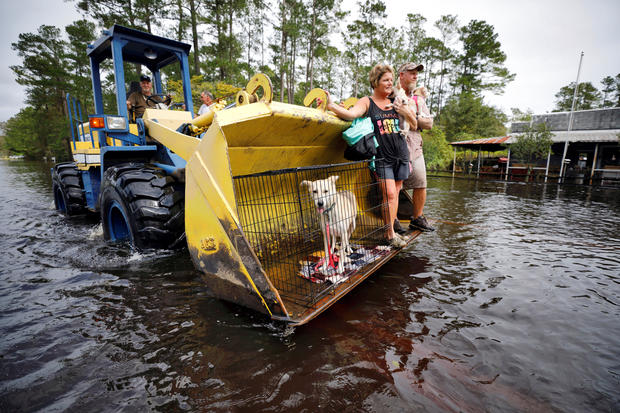 12/13: Controversy surrounds Trump's secretary of state pick; Woman with Down...

Fingerprint leads to arrest in killing of woman in 1983