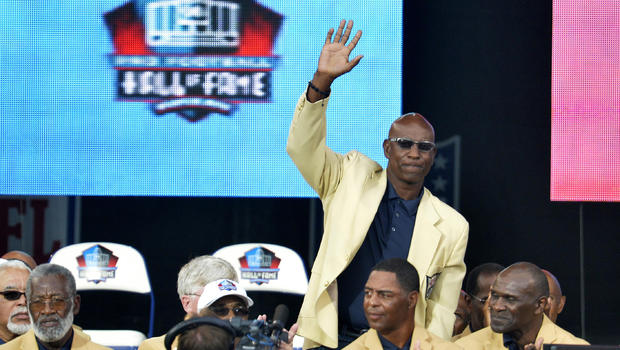 A group of Pro Football Hall of Famers led by Eric Dickerson is demanding health insurance coverage and a share of NFL revenues or else those former players will boycott the induction ceremonies.

In a letter sent to NFL Commissioner Roger Goodell, NFLPA Executive Director DeMaurice Smith and Hall of Fame President David Baker, 21 Hall of Fame members cited themselves as "integral to the creation of the modern NFL, which in 2017 generated $14 billion in revenue."

Among the signees were Dickerson, who is listed as chairman of the newly created Hall of Fame Board the group has formed, Jim Brown, Joe Namath, Lawrence Taylor and Sarah White, the widow of Reggie White.

One name on the list of 22 signees including Sarah White was Carl Ellard, but no one by that name has played professional football. Former Vikings defensive end Carl Eller, however, is a Hall of Fame member.

"The time has come for us to be treated as part of a game we've given so much to," the letter states. "Until our demands are met, the Hall of Famers will not attend the annual induction ceremony in Canton. It's well known that the NFL is celebrating its 100th anniversary in 2020, and while we are proud of our role in building this league, we don't believe 100 years of player exploitation is something to celebrate."

The strongly worded letter called out the league for paying Goodell $40 million, saying "there are better uses for that money." It also criticized Smith for his salary and the lack of a former player on the players' association executive board. But there have been two former players on that executive board since 2009.

Jerry Rice said he wasn't on the Hall of Fame board. The former wide receiver tweeted that he plans to support the Hall of Fame and "looks forward to attending the 100th anniversary in 2020."

Kurt Warner, whose name is also on the letter, also released a statement on Twitter that said he wasn't made aware of the letter and his name was mistakenly put on it. He said he supports the efforts for better benefits for all retired players and doesn't believe in boycotting the Hall of Fame.

Baker said the Hall seeks to help all players, not just those enshrined in Canton, Ohio.

"Many Hall of Famers have reached out to express their support of the Hall," he said in a statement. "While we enshrine Hall of Famers, our mission is to serve every player who helped build this great game. We guard the legacies and seek to serve all players and not just Hall of Famers who we serve every day."

NFL players have received a pension since the Bert Bell Plan, named after a former league commissioner, was created in 1959. In the 1993 collective bargaining agreement, a 401 (k) plan to which players also could contribute was established and in 1998 an annuity program.

"There have been significant increases in the pension with every collective bargaining agreement in the history of this sport," said Miki Yaras-Davis, the NFLPA's senior director of benefits.

"The normal retirement age is 55 for former players, and those players can leave in their pension (funds) and at 65 they have almost a 300 percent increase. This is one of the few defined benefit plans left in the country. It's a program which isn't seen much anymore that defines the benefits at a certain age."

During the 2011 labor dispute and lockout, one of the main issues was establishing a fund for pre-1993 players. In that CBA, a "Legacy Fund" was established, with a $620 million increase in benefits, with team owners contributing out of their share of revenues for the first time. The union and the league have increased pensions three times for former players since 2011.

But the letter calls the Legacy Fund "little more than cynical public relations ploys that fail to help those who desperately need it."

"The total cost for every Hall of Famer to have health insurance is less than $4 million — less than that of a 30-second Super Bowl ad, or about 3 cents for every $100 the league generates in revenue," Dickerson's letter states. "Paying Hall of Famers an annual salary works out to about 40 cents for every $100 in annual revenue, a figure that will increase dramatically in the near future with legalized gambling."

The disgruntled former players also took aim at the expansion of the Hall of Fame into a village that Baker has estimated will eventually cost $1 billion. The NFL provides significant funding for the hall, but equally significant costs for the project are funded elsewhere.

Also, the Hall of Fame village plans a player care center called Legend's Landing that provides independent and assisted living for retired hall of famers as well as "members of the NFL's legends community, along with coaches, officials and administrators," according to the Hall of Fame's website. A health care center also is part of the expansion.

The letter's demands cover the 318 members of the Hall of Fame, but says it hopes to create "a template for active players in the next round of (labor) negotiations." Those talks would come in 2021 when the current CBA expires. 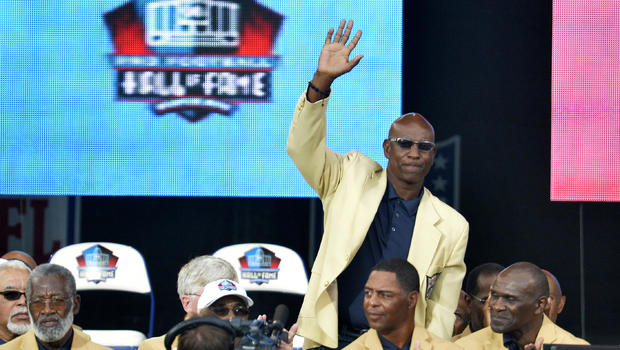 The importance of diverse characters, according to company CEO April Showers

Court to hear arguments over Ohio law banning abortions due to...

If my measles shot was years ago, am I still protected?