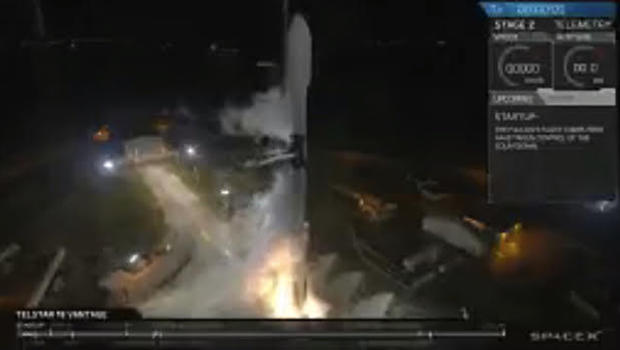 A SpaceX Falcon 9 rocket thundered to life and streaked away from Cape Canaveral early Monday, boosting a Canadian communications satellite toward orbit in the California rocket builder's 16th flight so far this year.

Lighting up the deep overnight sky with a burst of flame, the rocket's nine Merlin 1D first stage engines ignited and throttled up to full power at 12:45 a.m. EDT, quickly pushing the 229-foot-tall booster away from pad 40 at the Cape Canaveral Air Force Station.

Liftoff came an hour and 17 minutes late because of widespread lightning and extensive cloud cover over Cape Canaveral, but conditions improved enough as the evening wore on to permit a safe launch.

Arcing away to the east, the Falcon 9 put on a spectacular show for area night owls as it shot out over the Atlantic Ocean east of the launch pad, knifing through low clouds and racing toward space atop 1.2 million pounds of thrust.

Two-and-a-half minutes after liftoff, after pushing the rocket out of the thick lower atmosphere, the first stage engines shut down as planned, the stage fell away and the flight continued on the power of a single Merlin engine in the rocket's second stage.

The first stage, meanwhile, was programmed to attempt a landing on the off-shore drone ship "Of Course I Still Love You" while the second stage continued to orbit. A successful landing would improve SpaceX's record to 29 successful first stage recoveries, 18 on drone ships and 11 at the Cape Canaveral Air Force Station.

But the primary goal of the flight was to boost Telesat Canada's Telstar 18 VANTAGE communications satellite into an initially elliptical orbit. The satellite, built by Space Systems/Loral, represents a partnership between Telesat Canada and Hong Kong-based APT Satellite Co.

The relay station is equipped with on-board thrusters to circularize the orbit at 22,300 miles above the equator. It will replace an older Telstar relay station, providing video, data and mobile communications services across Asia, Australia and the Pacific Ocean region. 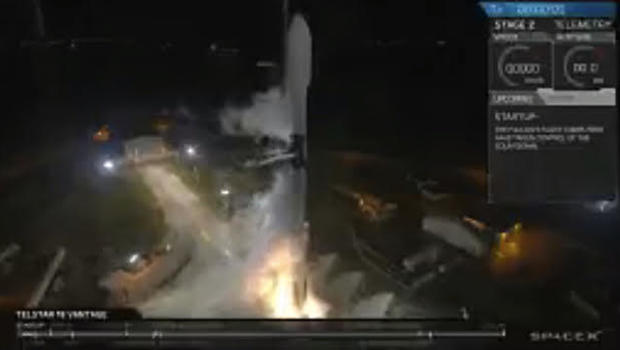 Scalise returns to Capitol for first time since shooting