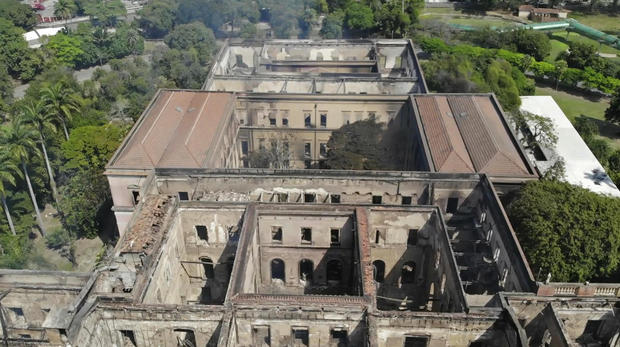 RIO DE JANEIRO — Smoke rose Monday from the burned-out hulk of Brazil's National Museum, as recriminations flew over who was responsible for a huge fire that destroyed at least part of Latin America's largest collection of historical artifacts and documents.

A few hundred protesters who gathered outside the museum gates tried several times to push into the site, demanding to see the damage and calling on the government to rebuild. Police held the crowd back with pepper spray, tear gas and batons.

The museum's director said a portion of the collection was destroyed and that it was impossible to say yet how much. But the deputy director suggested that the damage could be catastrophic, with most objects in the main building probably lost, except for some meteorites.

The main building, which was once the home of the Brazilian royal family, housed a collection of 20 million items that included Egyptian and Greco-Roman relics and the oldest human skull found in the Western hemisphere, known as Luzia.

On Monday, the building was still standing, but much of it appeared to have been gutted. Civil defense authorities warned that the structure was not safe to enter because the roof and internal walls had been compromised and could collapse further.

It was not clear how the fire began Sunday evening, when the museum was closed. But the flames quickly fueled criticism of Brazil's dilapidated infrastructure and budget deficits as the nation prepares for national elections in October.

Several officials have said the building was known to be in serious disrepair and at significant risk of catching fire.

"Just crying doesn't solve anything," Alexander Kellner, the museum's director, told reporters at the scene. He became emotional as he described plans to salvage what was left of the collection and rebuild. "We have to act."

The museum has suffered underfunding for years that prevented renovations and forced it to close exhibits. The Folha de S. Paulo newspaper reported in May, as the museum was preparing to celebrate its bicentennial, that its annual budget had fallen from around $130,000 in 2013 to around $84,000 last year.

In a sign of how strapped the museum was, when a termite infestation last year forced the closure of a room containing a 39-foot dinosaur skeleton, officials turned to crowdfunding to raise the money to reopen the room.

The institution had recently secured approval for a planned renovation, including an upgrade of the fire-prevention system, Kellner said.

"Look at the irony. The money is now there, but we ran out of time," he said.

Luiz Fernando Dias Duarte, the deputy director, noted another irony: He said museum officials were seeking renovation funds in 2013, at the same time that Brazil was spending millions to build stadiums for the World Cup, which it hosted the following year.

"The money spent on each one of those stadiums — a quarter of that would have been enough to make this museum safe and resplendent," he told Brazilian TV. He said the responsibility for the museum's destruction lay squarely with federal authorities.

On Monday, President Michel Temer announced that private and public banks, as well as mining giant Vale and state-run oil company Petrobras, have agreed to help rebuild the museum and reconstitute its collections. French President Emmanuel Macron offered in a tweet to send experts to help.

Fire department spokesman Roberto Robadey said firefighters got off to a slow start because the two fire hydrants closest to the museum did not work. Instead, trucks had to gather water from a nearby lake.

Kellner said there were fire extinguishers on the site, but it was not clear if there were sprinklers, which are problematic for museums because water can damage objects.

Employees had recently received training from firefighters in how to prevent and respond to a blaze in the building, Duarte said. He lamented that no one was on hand Sunday night to put that training into practice.

"It was a constant worry," he said, adding that he would unplug everything in his office before leaving because of the fire risk.

On the massive site where the museum sits, signs of disrepair were evident: The fencing was dilapidated. Stonework was cracked, and lawns appeared untended.

"This fire is what Brazilian politicians are doing to the people," said Rosana Hollanda, a 35-year-old high school teacher, who was crying Monday at the gates. "They're burning our history, and they're burning our dreams."

Roberto Leher, the rector of the Federal University of Rio de Janeiro, of which the museum is a part, told reporters that the building needed an upgrade to its electrical and water systems and a new fire-prevention plan.

"We all knew the building was in a vulnerable state," he told reporters. Officials had been working with firefighters to reduce those risks, he added.

Asked by a reporter why such disasters don't happen at cultural institutions in other countries, Kellner, the museum director, replied: "Ask yourself that. That's a good question."

Latin America's largest nation has struggled to emerge from its worst recession in decades. The state of Rio de Janeiro has been particularly hard hit in recent years thanks to a combination of falling prices for oil, one of its major revenue sources, mismanagement and massive corruption. 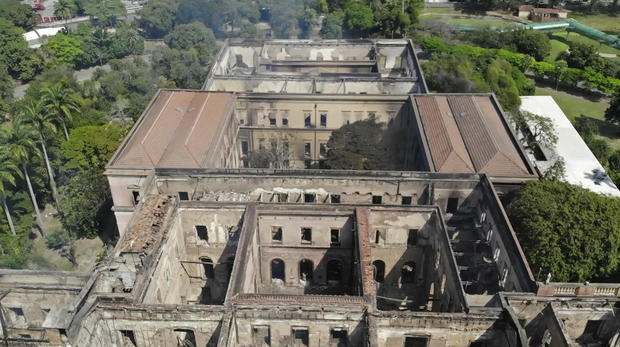 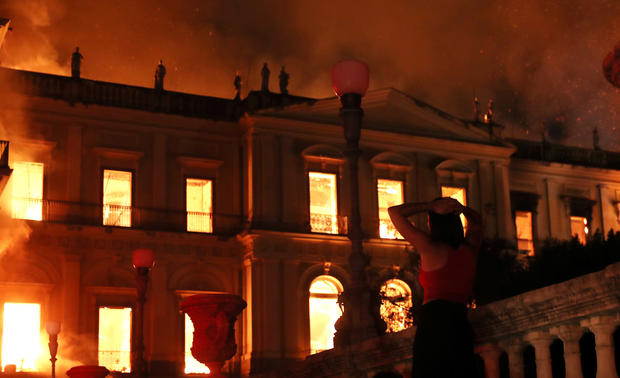 Eye Opener: COVID cases surge in the U.S. this summer

NFL may force teams to forfeit over COVID outbreaks

Saudi woman who fled family: “We are treated as an object,...