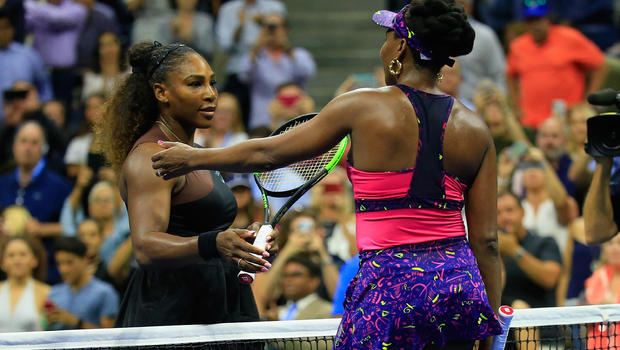 NEW YORK — Serena Williams kept booming big shots for winners, never allowing herself to feel sorry for the overmatched player on the other side. So what if it happened to be her big sister?

The Williams sisters, long ago in careers that have spanned 20 years and 30 meetings as professionals, learned they had to view each other only as opponents – and in Serena's eyes, Venus is the best one she's ever played.

"Even though it's difficult, especially for me," Serena said, "we just do the best that we can."

On Friday, it was perhaps the best she's ever done against Venus.

Serena equaled her most-lopsided victory against her sister with a 6-1, 6-2 rout in the third round of the U.S. Open.

Serena shook off an early ankle injury to win seven straight games and seize control in perhaps her most dominant performance since giving birth to her daughter a year ago Saturday.

The sisters' earliest meeting in a Grand Slam tournament in 20 years was over early, with Venus unable to do anything to blunt Serena's power, even after the fans that were part of Friday's single-day record crowd of 70,162 tried desperately to get behind her with pleas of "Come on, Venus!" early in the second set.

"I think it's by far the best match I ever played against her in forever," Serena said of the match that lasted just 1 hour, 12 minutes. "But I don't know about ever, ever. It probably was. I played much better tonight than I have since I started this journey on my way back."

"It's not easy," Serena said, despite how easy it looked in a match that lasted just 1 hour, 12 minutes.

They hadn't played this early in a Grand Slam since Venus won in the second round of the 1998 Australian Open in their first meeting as pros, and only once over the next two decades had either won so decisively. Serena won by the same score in a semifinal victory in Charleston, South Carolina, in 2013.

"I think it's the best match she's ever played against me," Venus said. "I don't think I did a lot wrong. But she just did everything right."

Serena, the No. 17 seed, will face Kaia Kanepi of Estonia, who knocked out top-ranked Simona Halep in the first round.

Serena, who turns 37 next month, leads the series 18-12 with her sister, 11-5 in Grand Slam tournaments. But this one wasn't expected to be so easy, not with Serena still working her way back into form after returning to the tour in the spring.

But this was the type of tennis that has brought her to 23 Grand Slam singles titles, the ability to pound balls all over the court and chase down the rare shots that looked like they might get past her.

"Obviously that level is definitely where she's going to want to stay during this whole tournament," Venus said.

Serena pounded 10 aces to just one for Venus, the No. 16 seed who was perhaps a little drained after two tough matches to begin the tournament, including a three-setter against 2004 U.S. Open champion Svetlana Kuznetsova in her opener.

Serena had an easier time in the first two rounds, though that was expected to change Friday under the lights in Arthur Ashe Stadium. They had combined for eight titles in Flushing Meadows, six by Serena, and each had beaten the other in a U.S. Open final.

But there was no beating Serena on this night, and the discouraged look on Venus' face across much of the match indicated she seemed to realize it.

"I mean, she played so well, I never got to really even touch any balls," said Venus, a semifinalist at the U.S. Open last year. "When your opponent plays like that, it's not really anything to be upset about."

It looked as if Serena could have trouble when, in the second game of the match, her right ankle turned awkwardly when Venus hit behind her on a shot. Serena stood near the baseline with her back to the court for quite a few seconds, then motioned to the chair umpire that she wanted to the see the trainer at the next changeover.

Serena had the ankle treated with a 2-1 lead, then broke in the next game, helped when Venus missed an easy swinging volley wide. She would break again for a 5-1 lead, then pound two aces in the next service game to wrap up the first set in 31 minutes. 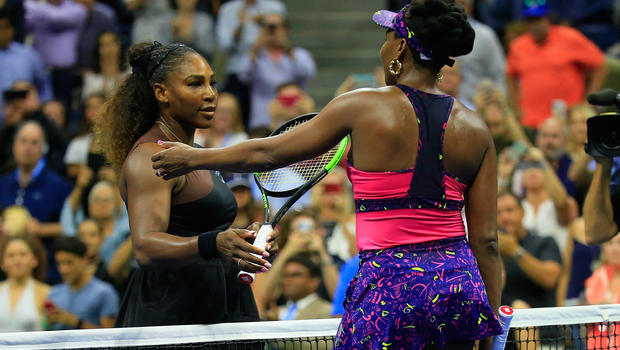 A salute to moms: Thank you from “Face the Nation”

New details about ambush in Niger that killed Green Berets

94-year-olds find love in the time of coronavirus

Laura Bush on the influence of first ladies