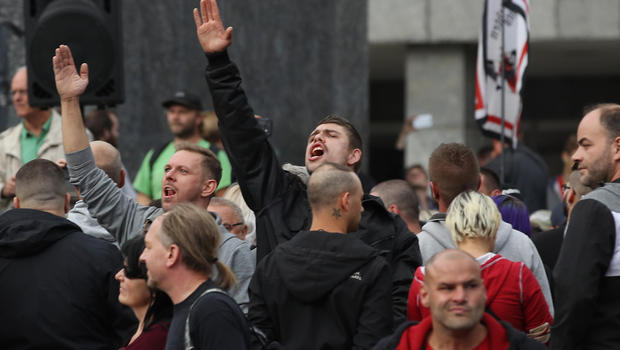 CHEMNITZ, Germany — The governor of Germany's eastern state of Saxony visited Thursday the city where anger over the suspected killing of a man by migrants sparked violent protests. Police were preparing for further demonstrations during the trip to Chemnitz by Governor Michael Kretschmer, an ally of German Chancellor Angela Merkel.

At least 18 people were injured Monday when far-right protesters, mobilized from surrounding areas and further afield, clashed with counter-protesters in the city center. The demonstration followed calls on social media to honor a 35-year-old German citizen stabbed to death Sunday in an altercation.

Authorities denied online rumors that the victim had been protecting a woman from harassment, saying there was no evidence this had been the case.

Still, the public display of anger and footage showing neo-Nazis hurling abuse and bottles at counter-protesters as police struggled to keep the groups apart raised fresh concerns about the threat posed by far-right extremists in Germany.

Saxony has long been a hotbed of anti-migrant sentiment and is home to the group Patriotic Europeans against the Islamization of the West, or PEGIDA, as well as a stronghold of the far-right Alternative for Germany party, which received almost a quarter of the vote in the state last year.

There have been regular attacks against migrants over the years in Saxony, especially since the influx of more than a million refugees to Germany in 2015 and 2016. While the share of foreigners in Saxony remains below the national average, concern among the population about migrants committing crimes is particularly high.

Chemnitz prosecutors said a 22-year-old Iraqi and a 23-year-old Syrian were arrested on suspicion of manslaughter in connection with Sunday's killing.

Adding to pressure on Kretschmer, who faces state elections next year, opposition parties have called for an investigation into alleged collusion between police and far-right extremists after the arrest warrants for the two suspects were leaked on social media.

The incident comes days after a man at a far-right protest was filmed harassing journalists. Police subsequently held the reporters for 45 minutes – ostensibly to check their identities – preventing them from covering the demonstration. It later emerged that the protester was a civilian employee of Saxony's criminal police department. On Thursday, the state police department said that after talks with the man and his lawyer, the man would resign from his job with the police next week, the German news agency dpa reported.

Public displays of the salute, the Nazi swastika and other means of glorifying Adolf Hitler's National Socialist regime are forbidden in Germany and can result in fines or prison sentences.

Authorities in Saxony requested the help of federal police to prevent further outbursts of violence in the coming days, including during a planned far-right protest outside a town hall meeting Kretschmer planned to hold with citizens late Thursday.

In a separate incident, police said Thursday that a 20-year-old Syrian man was attacked in the northern city of Wismar by three German-speaking men shouting anti-migrant slurs and had to be hospitalized for his injuries.

Rostock police said the incident late Wednesday was being investigated as a hate crime.

The Syrian in Wismar was on his way home alone when he was attacked. Two of the suspects punched him in the face and the third hit him with a chain on the shoulder and ribs area, knocking him to the ground before they fled.

He was released after treatment for a fractured nose and bruises to his face and upper body.

The co-leader of Alternative for Germany, which came third in last year's national elections, said he understood the public anger over the killing of the German man last Sunday.

Alexander Gauland told daily Die Welt in an interview published Wednesday that "when such a killing occurs, it's normal for people to snap." 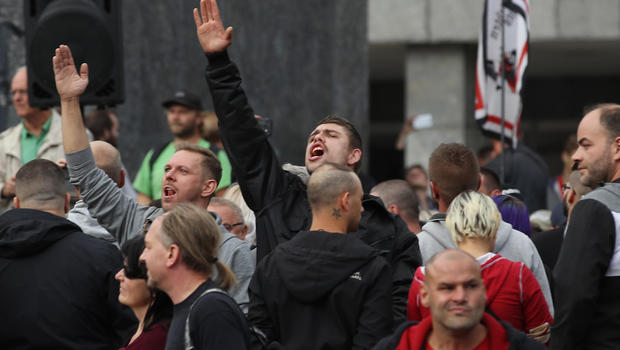 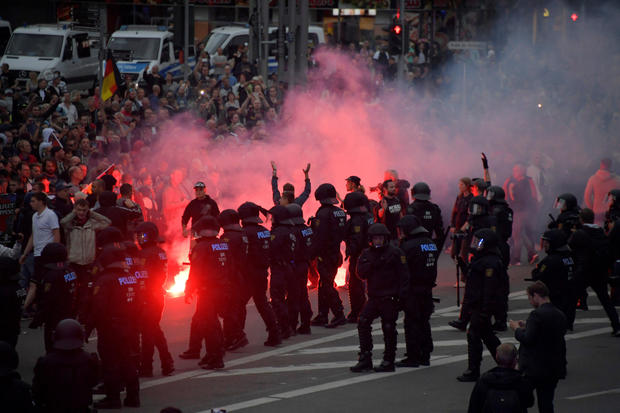 IRS tells taxpayers in some states to delay filing returns