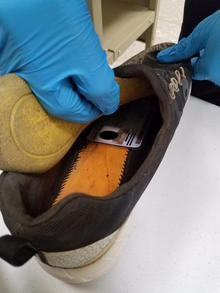 Customs and Border Protection (CBP) agents used new facial recognition technology to arrest a man trying to enter the U.S. illegally, the agency said Thursday. According to CBP, the 26-year-old presented a passport that didn't belong to him upon arrival at Dulles International Airport in Washington, D.C., on a flight from Sao Paulo, Brazil.

The new facial recognition system compares photos in passports to the faces of the people presenting them, and flagged that the man didn't match the passport photo. He was taken in for questioning, and during a search, officials say they found the man's actual ID from the Republic of Congo hidden in his shoe.

The agency said it was the first time a passenger with fake travel documents was discovered using the technology. CBP did not reveal the man's name, citing a pending investigation. He faces possible criminal prosecution.

"Facial recognition technology is an important step forward for CBP in protecting the United States from all types of threats," said Casey Durst, director of the CBP's Baltimore Field Office. "Terrorists and criminals continually look for creative methods to enter the U.S. including using stolen genuine documents. The new facial recognition technology virtually eliminates the ability for someone to use a genuine document that was issued to someone else."

CBP said it's assessing the use of the technology as part of a future process in which travelers use biometrics instead of their boarding pass or physical ID to pass through security screening.

In 2015, CBS News was given access to a demonstration of the facial recognition technology at Dulles during a pilot program. It officially started at Dulles on Monday. In June, Orlando International Airport became the first in the country to implement the program. According to CBP, there are now 14 airports using it.

The goal is to speed up the security process at airports. But privacy rights advocates have voiced concern it could eventually be used to track law abiding citizens in other settings. 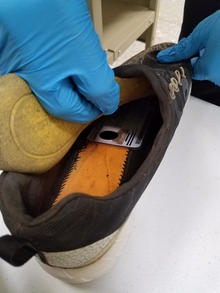