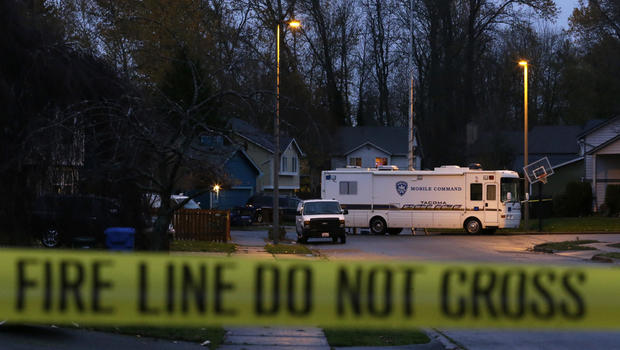 FREDERICK, Colo — The Colorado man accused of killing his wife and two young daughters appeared in court for an arraignment Tuesday. The court appearance came after a newly-released court document revealed Christopher Watts claimed his pregnant wife killed the children after learning he wanted a separation because he was having an affair. He told police he erupted in rage after witnessing the killings and strangled his wife inside the family's suburban Denver home, according to the documents.

The body of 34-year-old Shanann Watts was found in a shallow grave Thursday near the oil tank where the bodies of 3-year-old Celeste and 4-year-old Bella were found submerged.

Shanann's brother, Frank Rzucek Jr., rubbed his father's shoulders and glared unflinchingly at his brother-in-law. A bailiff stood between them.

Watts appeared handcuffed and wearing an orange prison jumpsuit. He didn't show emotion. He said "Yes, sir," when the judge asked if he understood the murder and other felony charges against him and the penalties they carry, including the death penalty. Prosecutors have not yet decided whether to seek death.

A judge said the prosecution has alleged the crimes were acts of domestic violence.

Watts waived his right to have a preliminary hearing within 35 days. A judge set a status hearing for Nov. 19. Watts didn't enter pleas Tuesday.

Watts, an operator with Anadarko Petroleum, said he loaded his wife and daughters' bodies into the back seat of his truck and drove to an oil work site about 40 miles east of the family's Frederick home. There, he buried Shanann Watts' body and "dumped the girls inside" an oil tank, according to the court document.

Watts, 33, was charged Monday with three counts of first-degree murder, two counts of murdering a child under 12, one count of unlawful termination of a pregnancy and three counts of tampering with a deceased human body.

Mega Millions: 9th-largest prize in U.S. history is up for grabs