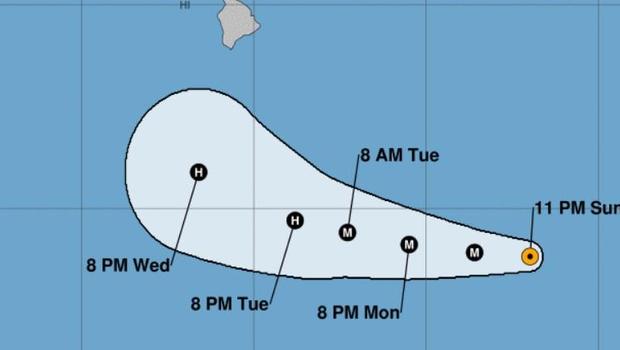 HONOLULU — Hurricane Lane continues to churn over the Central Pacific as a Category 3 hurricane. As of 11 p.m. in Hawaii Sunday (5 a.m. EDT), Lane was slightly stronger than it was earlier on Sunday, packing sustained winds of 125 mph with higher gusts.

The Central Pacific Hurricane Center said Lane was centered about 675 miles east-southeast of Hilo and 85 miles southeast of Honolulu and moving west at 14 mph.

Hurricane-force winds were extending 30 miles from the storm's center, while tropical-storm-force winds extended outward up to 110 miles.

The CPHC said little change in strength was expected through Monday, with gradual weakening forecast from Monday night through Tuesday.

Forecasters said it's still too soon to say what impact Lane would have on Hawaii, but the National Weather Service said the state could expect heavy rain — and a direct hit can't be ruled out, reports CBS Honolulu affiliate KGMB-TV.

The Weather Service said that, regardless of Lane's eventual track and intensity, computer models are pointing to an extremely moist tropical air mass moving over the islands beginning around Wednesday through the end of the week. That could lead to very heavy rainfall and flash flooding.

Heading into the work week, forecasters will be keeping a close eye on Lane, especially in light of varying forecast path models.

Forecasters are urging Hawaii residents to watch Lane closely and be prepared. 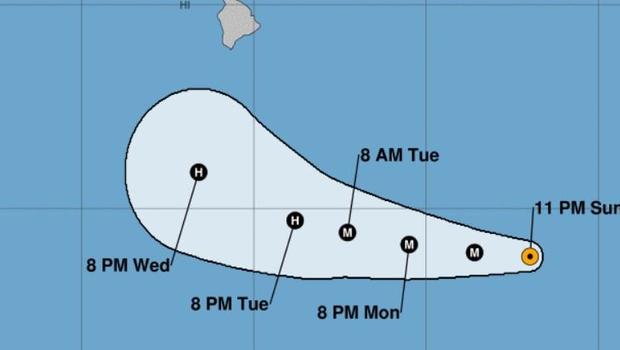