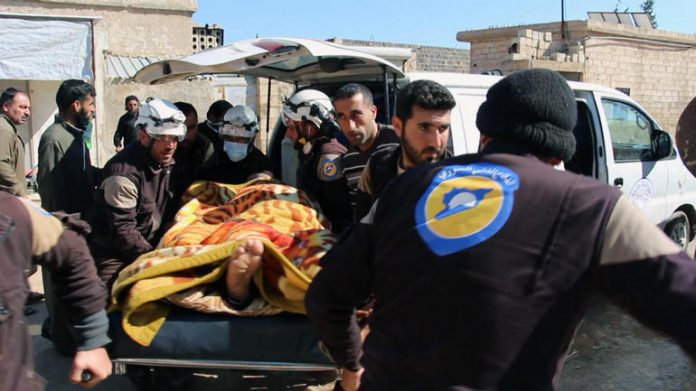 Syrian President Bashar al Assad has committed just about every war crime under international law. His worst atrocities involve banned chemical weapons. This past February, we brought you this story, about one of those massacres. It is hard to watch, and it is not for small children, but the story is important to see because chemical assaults have now become routine in Syria with 200 reportedly occurring over seven years. In November, Syria's ally, Russia, shut down the United Nations investigation into who is responsible. But our investigation continued. We found a number of witnesses to a nerve gas attack that happened on April 4, 2017.

"Some people were fainting completely unconscious. There were cases of trembling and convulsions, foam coming out of the respiratory tract and mouth. Some people appeared to be already dead."

The images were shot by a Syrian Civil Defense volunteer. So many victims fell at once, first responders used fire hoses to wash them. There was a chance, a small one, that stripping contaminated clothes and dowsing the skin might save a life. These are the people of a small farming town called Khan Shaykhun. They fell after a warplane dropped a bomb nearby. They're civilians. There's no military target here. But the village does lie in territory held by rebels fighting against the dictatorship of Bashar al-Assad.

What is striking is the number of children. Inhaling just a hint of the gas overwhelmed their nervous systems. All of their nerves fired at the same time, muscles seized, and paralyzed lungs left their last breath stuck in their throats.

The civil defense worker with the camera is repeating the name of the village—Khan Shaykhun, Khan Shaykhun—as though he feared the atrocity itself might be washed away and forgotten.

Edmond Mulet: Very early in the morning, between 6:30 and 7:00 in the morning on the 4th of April-airplanes were flying around and over Khan Shaykhun.

Edmond Mulet led the investigation of chemical attacks in Syria for the United Nations and the Organisation for the Prohibition of Chemical Weapons.

Mustafa al-Haj Yousef: Some people were fainting completely unconscious. There were cases of trembling and convulsions, foam coming out of the respiratory tract and mouth. Some people appeared to be already dead.

He counted the bodies of more than 30 children.

Mustafa al-Haj Yousef: There were young children. I was treating them, but it was already over. The doctor who was with us there said: 'Leave them, they're dead.' Young children, three months, four months, five months, some two years old.

The day before the attack, warplanes bombed local hospitals, ensuring a longer trip to medical care. White Helmet volunteers loaded those still gasping onto a truck — with 30 miles to go to reach one of the nearest surviving hospitals, where Dr. Abdulhai Tennari was working.

Dr. Abdulhai Tennari: There were patients who had lost consciousness. Patients suffering from shortness of breath. People were doing CPR. There were many children, women, the elderly. Every age. From the very first minute, we were positive that the gas that was used was sarin.

Sarin nerve gas was invented in a Nazi program. In 1997, sarin and other chemical weapons were banned by international law.

Scott Pelley: Tell me about some of the patients from that day that are still in your mind.

Dr. Abdulhai Tennari: The case that affected me the most was one where there were two girls who were five and six years old. They seemed to be sisters. They were brought to the hospital and I started doing CPR right away, but it was clear that the two girls had died hours ago.

Scott Pelley: Weren't you concerned about being exposed yourself?

Dr. Mamoun Morad: The situation is more desperate than I can describe. There are no words. It was like Judgment Day, the Apocalypse. You just can't even describe the scene, can't even begin to scratch the surface of explaining what happened. We didn't have any protective equipment for gas.

Scott Pelley: You're feeling the effects of this even now?

Dr. Mamoun Morad: Yes. My voice. Do you hear my voice?

The Khan Shaykhun attack drew immediate retaliation from the Trump administration, which fired 59 cruise missiles into a Syrian airbase. But only hours later, according to doctors and witnesses, the Syrian dictatorship dropped another banned chemical weapon, a chlorine bomb. The worst of the chemical attacks came in 2013, when 1,400 civilians were killed by sarin near Damascus. In response, the U.S. and Russia pressed Syria to hand over its chemical weapons. 1,400 tons of poisons were destroyed. So the attack on Khan Shaykhun should not have been possible. The head of the U.N. investigation, Edmond Mulet, told us the Syrians had an explanation.

Edmond Mulet: The Syrians have been claiming since the very beginning that this incident in Khan Shaykhun was staged. It was something that was created by the opposition, by the rebels, by the terrorists in order to blame the Syrian government. They claimed that the bomb that created the crater was an IED, an improvised explosive device, that was placed on the surface of the– of the road– of the asphalt that morning, that IED contained sarin and that's how it was released, but it did not come from an aerial bomb.

Evidence at Khan Shaykhun was gathered by the White Helmets. Chemical attacks have become so common that advanced equipment and training are being provided by an international charity called Mayday Rescue.

Mohammad Kayal: We collected samples from the body of the missile, and a soil sample. We also took a sample from the clothes of the affected, as well as animal samples, a cat, a pigeon. We took hair as well.

And, the samples were all positive for sarin.

Scott Pelley: Why was it so important to you to document what happened in the village?

Mohammad Kayal: Our job is to be humanitarians. The goal of the strike was to target civilians. It didn't target fighters on the front. We must document a chemical strike such as this one, so we can show the entire world.

We spoke to the U.N.'s Edmond Mulet about three hours before he lost his job. Russia, the Syrian dictatorship's chief ally, ended Mulet's investigation with a veto in the security council. Russia called his investigation's results "very disappointing."

Scott Pelley: Who's using the sarin?

Edmond Mulet: Only the Syrian government.

Scott Pelley: How do you know that?

Edmond Mulet: Well, the investigations we have conducted have proven that the sarin that has been used in Syria has come from the original stockpile that was produced and created and distilled by the Syrian government some years ago. We have been able to determine and compare what had been used in the field recently in Syria with the original stockpile, and they matched completely.

Scott Pelley: Does anyone else in that theatre of war possess sarin gas, to your knowledge?

Edmond Mulet: No. No, nobody else. Because it's so difficult to produce, you need very sophisticated and big laboratories to do that. The manipulation of the sarin is extremely complicated. It's extremely volatile. One single drop here right now would be killing everybody in this studio immediately. So, it's not anybody that can do that.

One question not answered by the U.N. investigation was 'why.' Why resort to a war crime? To find out we traveled into the province where Khan Shaykhun is located. Idlib province, largely controlled by an Islamist extremist group, Hai'yat Tahrir al-Sham.

Here we found the dictatorship had used conventional bombs against hospitals and schools, in addition to the nerve gas in the neighborhoods.

So what's the point of using the world's most grotesque weapon on civilians, on children? This is a refugee camp in rebel-occupied territory inside Syria and there are hundreds of them, they dot the landscape. Millions of Syrians have been forced from their homes. The Assad dictatorship is essentially clearing out any part of the country that it cannot control. Bombing the hospitals kills the here and now. Bombing the schools kills the future and dropping sarin suffocates whatever might have been left of hope.

We found Abu Hassan in a refugee camp with his family, at least what remained of his family. He lost two adult sons and a grandson in the gas at Khan Shaykhun.

Abu Hassan: My son, they brought him to a hospital in Turkey and he died. His brother, who came to rescue us, well he got dizzy, collapsed and he died. My grandson also died.

His wife, Um Hassan told us:

Um Hassan: My sons were young and these are their children. What was the fault of these children to live without a father? What was their fault?

Scott Pelley: How do you explain this to these children?

Um Hassan: What can we tell them? This one was injured with us. I told [one] your father is dead. He said: "Don't tell me dad is dead! Don't say that dad is dead!" But, what can we tell them, how can they understand? We have a neighbor, poor woman, her children, her grandchildren. All 12 in the house died, not a single one lived, not a single one.

Edmond Mulet: This is a crime against humanity using chemical weapons. if we allow this to happen in Syria, this might happen somewhere else and if impunity prevails and people can carry out doing these things without any consequences, this might give ideas to others and I've said this to the Russians. This will happen in many of your own Republics in the future if you don't help to put an end to this right now.

But, impunity does prevail. Bashar al-Assad will soon win the war. He may remain president or step down in the course of negotiations, but, either way, victors never face judgment. Still, even without a war crimes trial, the evidence will remain indelible. 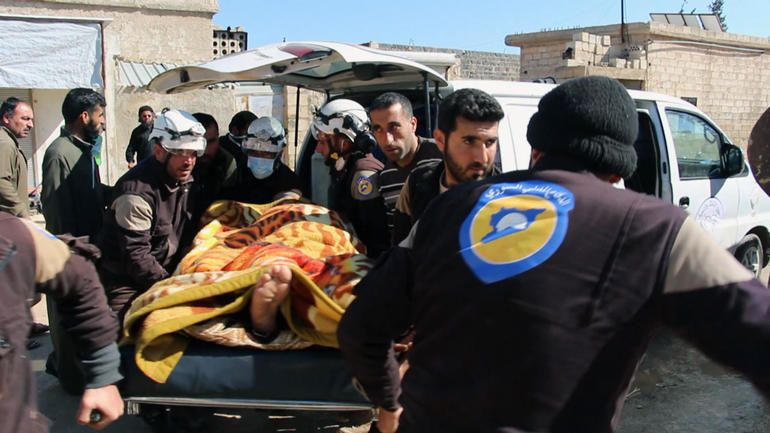 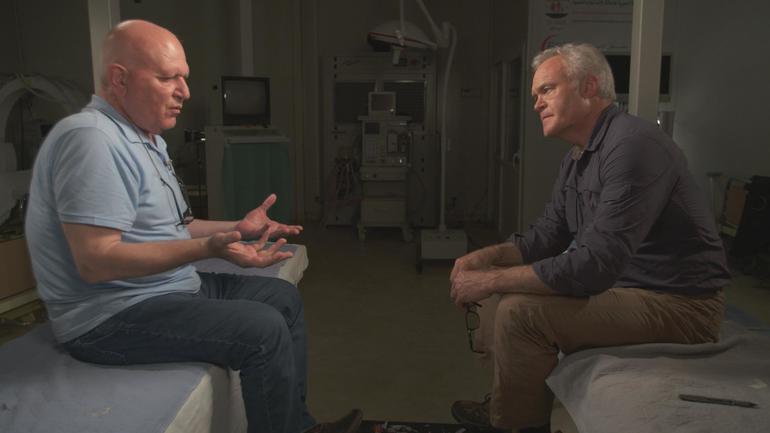 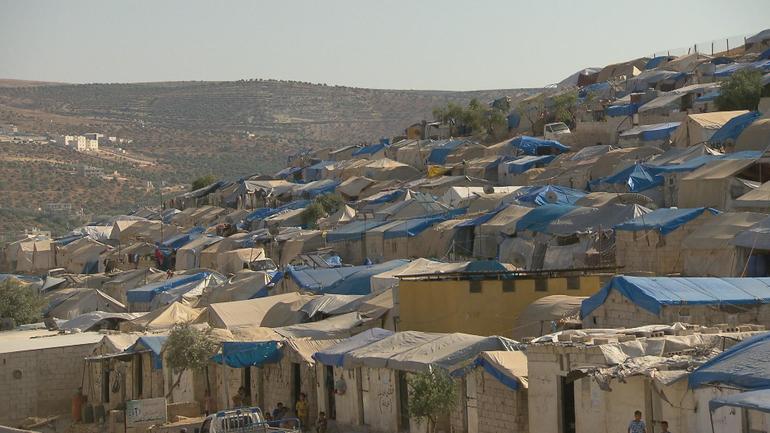 Who’s responsible for the opioid epidemic?