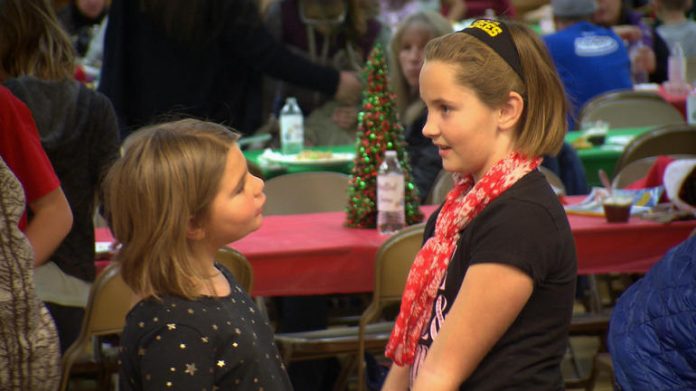 A million children now live with their grandparents primarily due to their parents' addictions, increasingly because of opioids

Editor's Note: Since this story originally aired, viewers have asked how they can help. We suggest contacting the organization we featured – GrandFamilies – through its website http://cssutah.org/

The growing opioid crisis has been declared a public health emergency. It's sparked a parallel crisis you rarely hear about: the impact on children neglected by addicted parents. More than one million American children now live with grandparents, primarily because of their parent's addiction to opioids and other drugs: crack, heroin, meth and alcohol. As we first reported in may, grandparents, are putting off retirement and plowing through savings to rescue their grandchildren from dangerous situations.

To see how widespread this is, we went to one of the healthiest states in the country, Utah. Tonight, we'll re-introduce you to a few families around Salt Lake City, and meet children, raised in the wreckage of the opioid crisis, getting a chance at a normal life.

Nine-year-old Cheyenne Nunn and her seven-year-old sister, Lilah, have never been happier. Until recently, they lived with their mom and her boyfriend — the couple addicted to heroin, or meth, or both, says the girls' grandmother, Cheryl Nunn. To see Cheyenne and Lilah now secure in their grandmother's home outside Salt Lake City, it's hard to believe they once moved from home to home … to homeless.

Bill Whitaker: You remember being homeless?

Bill Whitaker: Where would you go?

The times they did have a roof over their heads, they didn't have much else.

Bill Whitaker: Did you have enough food?

Cheyenne Nunn: Sometimes but not always. I hid it under my bed.

Bill Whitaker: What would you hide?

Bill Whitaker: How old were you?

Bill Whitaker: How did you know to step up and take care of your little sister and cook?

Cheyenne Nunn: I knew that she needed it. So I decided to be what — something I'm not.

Bill Whitaker: Which is?

Bill Whitaker: You decided to be a grownup?

Cheyenne Nunn: Yea, I tried to be a grownup for Lilah.

Because of her daughter's drug addictions, Cheryl told us she knew her granddaughters were in danger. To keep track of them, and to prove in court her daughter was exposing them to drug dens and dealers, Cheryl gave her daughter a van — with a hidden tracking device.

Cheryl said her granddaughters were in that van. She knew she had to save them from her own daughter.

Cheryl Nunn: Well, the grandchildren are young and innocent. They are basically captives of a parent. Someone has to look out after them. And that person had to be me.

After providing tracking records of her daughter's drug-filled nights, a judge named Cheryl guardian of Cheyenne and Lilah.

Bill Whitaker: Can you forgive your mom?

Cheyenne Nunn: Not till she gives it up.

Bill Whitaker: Do you think she's going to stop using the drugs?

Cheyenne and Lilah haven't seen their mom in more than a year.

Cheyenne Nunn: Well, I'm not really happy about it. But I know that I have another mom right here. (Laugh)

Down the road in Salt Lake City, Alexia Ansley told us she too had to step up to be a parent for her younger brother and sisters as their mother spiraled down into drug and alcohol addictions.

Alexia Ansley: She was never there. And if we wanted to get food, we had to get it ourselves. I think she forgot she had kids some of the time.

Bill Whitaker: So you took care of them?

Alexia Ansley: Uh-huh. I would change their diapers. I would feed 'em, feed 'em baby food.

Bill Whitaker: When you first started stepping in to be the mom, how old were you?

"She's had to sacrifice almost everything. She had to change the whole way that she lived because our mom decided to do drugs."

When their mother was around, Alexia said she'd take the kids on excursions to pilfer in the neighborhood.

Alexia Ansley: If we saw somebody with this big giant snow globe and snowman, we'd go over there, unplug it, deflate it, put in in the in the wagon. We would take things.

Bill Whitaker: Would you actually go up on people's porches?

Alexia Ansley: If they had something on their porch, yeah.

Bill Whitaker: Your mom would go sell these things?

Alexia Ansley: Yeah. She'd sell 'em and then she'd go buy drugs. And if she had any money left, she would buy us candy for helping her. Or she'd steal candy. And we're kids. Candy's everything.

When Alexia filled in as mom, she managed to give her younger siblings candy thanks to a sympathetic shopkeeper.

Alexia Ansley: Sometimes I would gather up some couch change, and I tried buying them a candy and the guy at the register would let us take the candy if I didn't have enough change.

Bill Whitaker: I heard about couch hopping. What was that?

Alexia Ansley: So we were homeless at a point in time. We would go to my mom's friend's house, just some of her random friends, and we would sleep on their couch for a couple of days. And then once they kicked us out, we'd go to another couch. We mostly stayed at crack houses and just slept on their couches.

Couch-hopping ended five years ago when the children were legally taken in by their mom's mother Beth. Alexia is now 16, Brayden is 13, Mackenzy is 11 and Ember is eight. All pitch in at grandmom's house. It's now home.

Brayden Klaus: We get regular food and we get, like, nice clothing.

Ember Goode: We have stuffed animals. We don't have a bathroom filled with dirty clothes, up like a mountain.

Mackenzy Goode: And we always know that we're going to have a decent meal that'll fill us up, so we're not sleeping hungry.

Bill Whitaker: MacKenzy, I heard that you would sleep on the stairs.

Mackenzy Goode: Yeah, because so my mom, she would like leave in the middle of the night and go who knows where, and then not come back for—sometimes it would be a couple days. I thought that maybe if I slept on the stairs she would be scared to step on me and so she wouldn't leave.

Bill Whitaker: Did that work?

Mackenzy Goode: Sometimes. Sometimes she would skip that step and then she would still go out.

Some nights their grandmother Beth would secretly park down the street from where her daughter and grandchildren were staying at the time, to keep watch all night.

Mackenzy Goode: It always made me feel safer that she was out there, because we knew that if anything were to happen we could, like, get hold of her really quickly.

Being a guardian angel has taken a toll. Beth told us she has wiped out her savings. Alexia got a job to help with the bills.

Beth Klaus: And sometimes I can't pay my electric bill, and I'll have to wait. And I go to the food bank a lot, you know. If I buy 'em things that are used, I wash 'em and put 'em in a box and give 'em to 'em. And they've never—they don't complain.

Bill Whitaker: What has your grandmother had to sacrifice to take care of you guys?

Alexia Ansley: Dating. (laugh) She says it all the time. All the time. I haven't dated in years. (laugh)

Mackenzy Goode: She's had to sacrifice almost everything. She had to change the whole way that she lived because our mom decided to do drugs.

In Salt Lake City, home of the Mormon Church, finding a beer used to be a challenge. Now drug use is out in the open. Stoked by the opioid crisis, 21,000 children – just in Utah – live with their grandparents.

Bacall Hincks runs a non-profit organization called Grandfamilies that helps grandparents and grandchildren adjust to new family arrangements. There's a growing demand for its services because of the opioid crisis.

Bacall Hincks: Unfortunately opioids is a very hard addiction to overcome. So the likelihood of these parents actually overcoming their addictions and coming home and being able to parent is very low.

Hincks introduced us to the families we interviewed. She told us, like Alexia and Cheyenne, young children of addicts often assume the role of parent.

Bacall Hincks: What we call parentified.

Bill Whitaker: How do you deal with that?

Bacall Hincks: I do my best to help them feel like a child again. And grandma and grandpa are there to take care of them now. And they don't need to worry about the safety of their siblings, because that's someone else's job. That's the adults' job.

Grandfamilies has separate groups for young children, older children and grandparents and brings the generations together for holiday parties. Bacall Hincks said it's important for them to see many others are in the same boat.

Bacall Hincks: They're able to connect with others who are in similar situations and have friends and don't feel so isolated and alone anymore.

"We can't not do it. They are our grandkids. They're our family."

Ellie Kligman, her brothers, and grandparents were all aided by Grandfamilies. The kids moved in with their mom's parents after their family fell apart. First, their dad abandoned them. Then, they say, their mom descended into opioid addiction and they ended up homeless. One day the school bus left them at a stop at this gas station. Their mom never came to pick them up.

Cindi sent their grandfather, Michael, to bring the kids home. They both thought they'd only have them a few days.

Michael Rogers: And then a few days turned into a few weeks. And then (laugh) a few weeks turned to months and here we are.

Bill Whitaker: How many years now?

Cindi Rogers: Two and a half. Almost three

Bill Whitaker: Had you been planning for retirement?

Cindi Rogers: We were gonna do tiny house, simplify life, and then travel.

Michael Rogers: As it worked out, it didn't work out that way. We became parents instead of grandparents.

The kids said with their mother often sleeping, or out of the house, they could do whatever they wanted. But their grandparents insist on rules.

Ellie Kligman: It sucks having rules and chores. But it has to happen for us to actually grow up and be a responsible adult and take charge of our lives.

Michael Rogers: That's true. I have a terminal cancer.

Bill Whitaker: So has this been especially tough on you?

Michael Rogers: Yeah. I have good days and bad days.

Cindi Rogers: I worry that I'll miss something in his care and I have.

Michael Rogers: You do wonderful.

They say being parents again has strained his health, their marriage and their bank account.

Bill Whitaker: So what has this done to your savings?

Cindi Rogers: I work full-time and then two part-time jobs.

Their daughter, they told us, has been in rehab. This isn't the retirement they had expected, but…

Michael Rogers: But we can't not do it. They are our grandkids. They're our family. 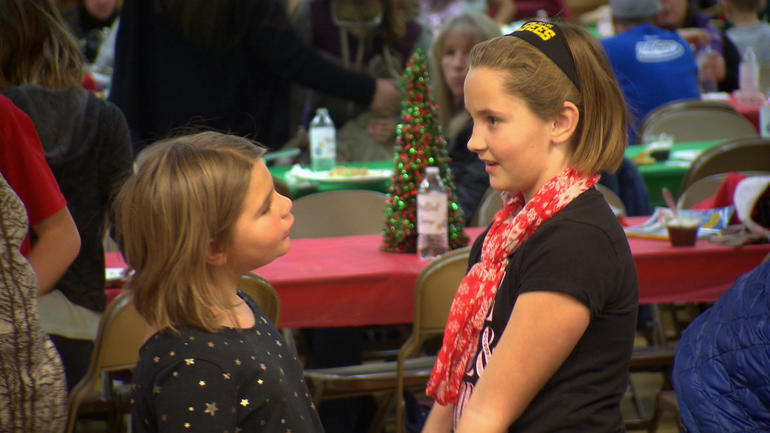 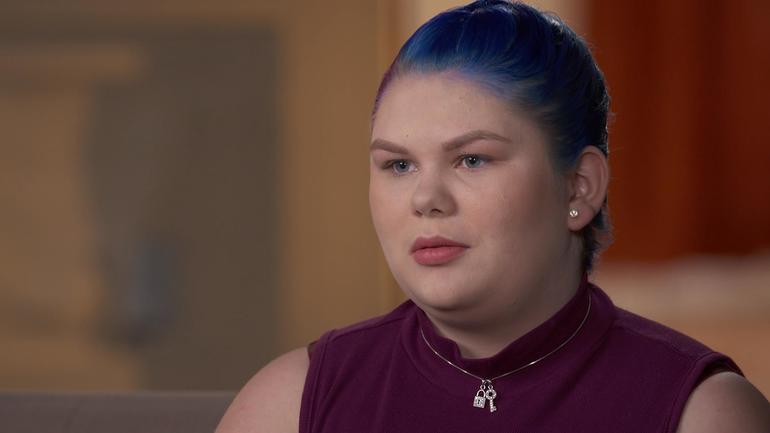 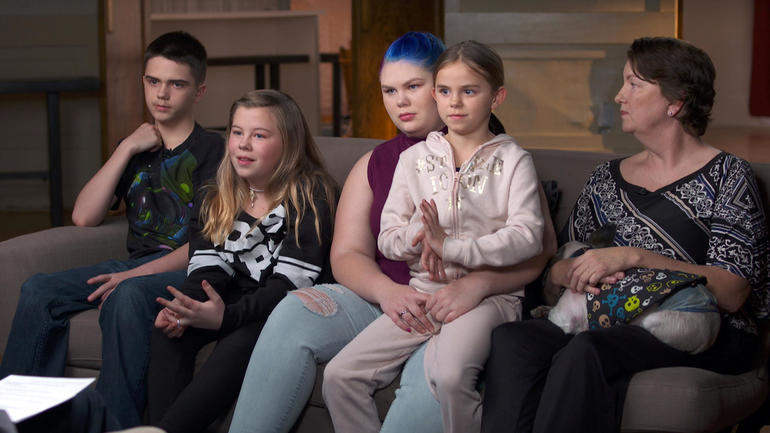 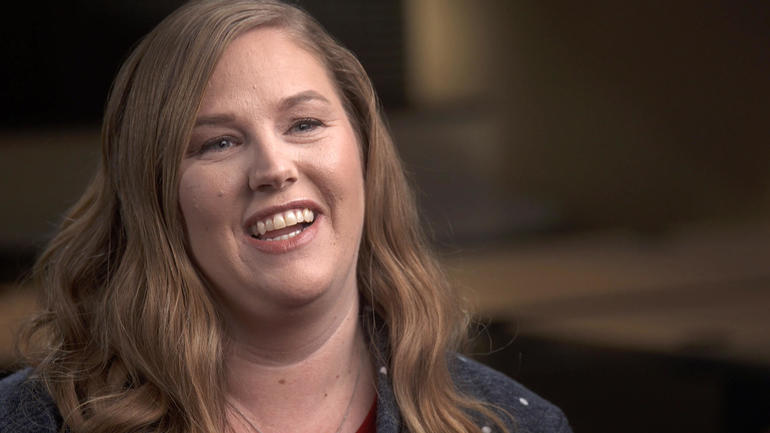 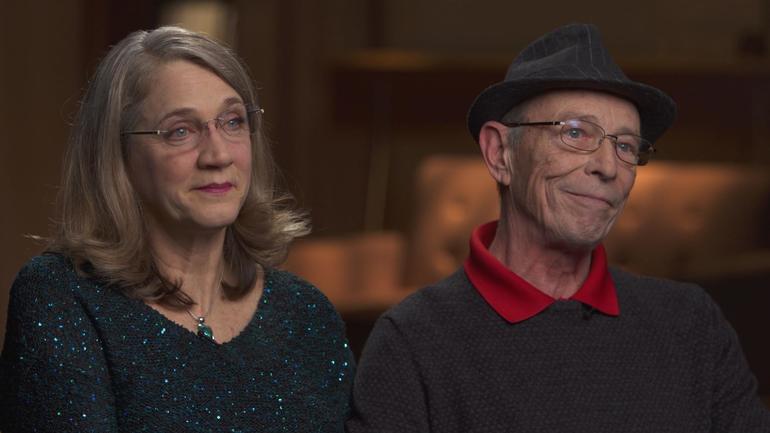 Tornado rips through Houston area, thousands in Texas without power