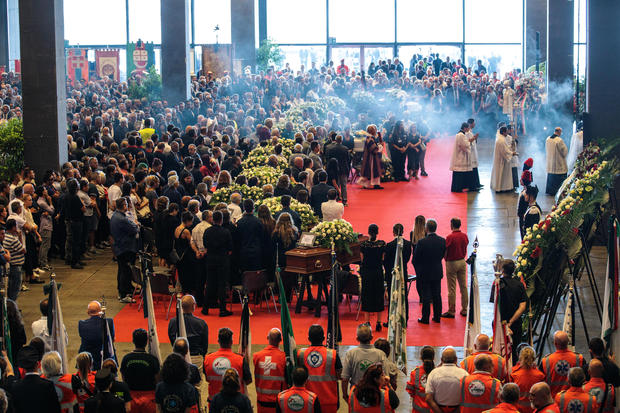 GENOA, Italy — Italy's president hugged and comforted mourners at a state funeral for many of those who died this week in the Genoa highway bridge collapse. Hours earlier, the toll from Tuesday's bridge collapse rose unofficially to 42 with the discovery of four more bodies.

Firefighter Stefano Zanut told Sky TG24 TV they had extracted from tons of broken concrete the crushed car that an Italian couple on vacation with their 9-year-old daughter had been traveling in.

Zanut said the last body pulled out of the wreckage was that of a young Italian man, an employee of Genoa's trash company, who was working under the bridge when it collapsed. The man's mother had refused to leave a tent set up a few hundred yards away from the rubble until his body was found.

Before the state funeral ceremony began in a pavilion on Genoa's fairgrounds, President Sergio Mattarella offered quiet words of comfort for families of the victims. Usually quite reserved in demeanor, Mattarella was embraced tightly for a long moment by a woman who was among the grieving.

Families of 19 of the dead had their loved ones' coffins brought to the hall for the funeral Mass led by Genoa's archbishop, Cardinal Angelo Bagnasco. Among the coffins were those of two young Albanian Muslim men who lived and worked in Italy. Their remains were blessed at the end of the Catholic service by a Genoa imam, who drew applause when he prayed for God to "protect Italy and all Italians."

During the funeral, applause rang out and many fought back tears as a prelate read out the first names of some 30 victims who have so far been identified. The mourners also applauded for Italian firefighters, police and volunteers for the civil protection department as they arrived for the funeral.

At other funerals elsewhere in Italy on Friday, angry mourners blamed authorities of negligence and incompetence for failing to keep the bridge safe.

Mattarella toured what's left of the Morandi Bridge, which broke apart in a fierce rainstorm, sending a long stretch of roadbed crashing 45 meters — 150 feet — into a dry river bed and near several apartment buildings. Those buildings have been evacuated and local authorities have said they will have to be demolished.

Mattarella didn't speak at the funeral, held on a national day of mourning, but after the ceremony ended, he told reporters the bridge collapse "is an unacceptable tragedy." He called the funeral "a moment of grief, shared grief, by all of Italy."

He demanded that "responsibility be ascertained with rigor" for the collapse of the bridge, which linked two major highways, one leading to Milan and the other toward France.

"I, too, have traveled over this bridge many times, even recently," said Mattarella, demanding that authorities commit to carrying out their "duty to guarantee the safety of our roads."

Prosecutors said they are focusing their probe on possible design flaws or inadequate maintenance of the highway bridge, which was completed in 1967.

The mood at the state funeral was subdued, although families voiced frustration and anger that public infrastructure isn't safe in Italy.

"These are mistakes that keep on repeating. And now, for the umpteenth time, angels have flown into heaven and paid for the mistakes of other human beings, severe mistakes," said one mourner, a local man who would only give his first name, Alessandro.

He held a placard that read: "In Italy, we prefer ribbon-cuttings to maintenance" – referring to the country's dilapidated infrastructure.

After leaving the funeral, Roberto Fico, president of Parliament's lower chamber, told reporters: "Today, the victims' families taught us a big lesson. I apologize, even though it's not my fault, in the name of the state for what it might not have done in the last years."

In his homily, the cardinal said the tragedy "gashed the heart of Genoa."

"The initial disbelief and then the growing dimension of the catastrophe, the general bewilderment, the tumult of emotions, the pressing "Whys?" have touched us yet again and in a brutal way showed the inexorable fragility of the human condition," Bagnasco said.

He encouraged citizens to show solidarity so "we can build new bridges to walk together" and rise above the tragedy. Bagnasco told the mourners that Pope Francis had called him Friday evening to express his closeness to all those suffering.

Also attending the Mass were players and managers from the city's two major league soccer teams, Genoa and Sampdoria. Their weekend matches were postponed out of respect for the dead.

The names of the dead were placed on each coffin before the altar. Photographs, flowers and on one coffin a signed sports jersey, a sports trophy and a stuffed animal added personal touches.

Players from a local team in Italy's Serie D soccer, Campi Corniglianese, came to pay tribute to one of their own. Among the two Albanian dead was Marius Djerri, 22, who played for the team and was on his way to work for a cleaning company along with his compatriot when their truck plunged into the abyss.

Team president Augustus Pintus recalled him as "a golden boy. Maybe not the strongest player on the pitch, but as a person, I would like all players to be like him."

RAI state radio said authorities now believe there are no more missing in the bridge collapse after a German man called officials to say he wasn't involved in the disaster. 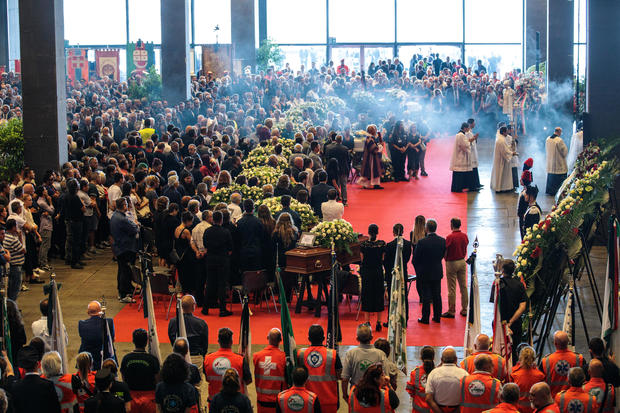 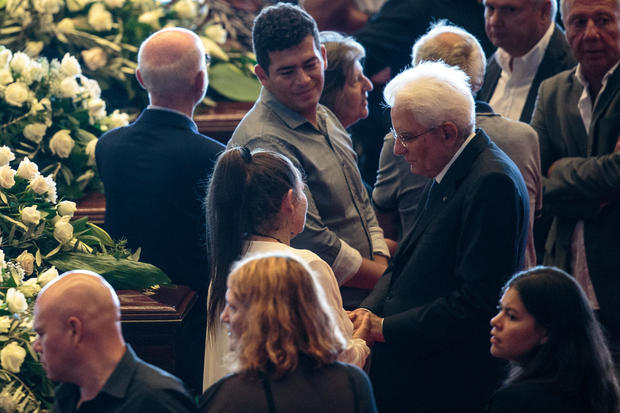 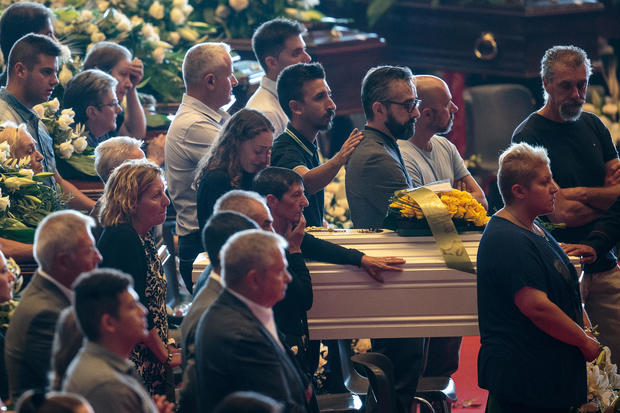 Disgraced reporter may have embezzled donations for war orphans