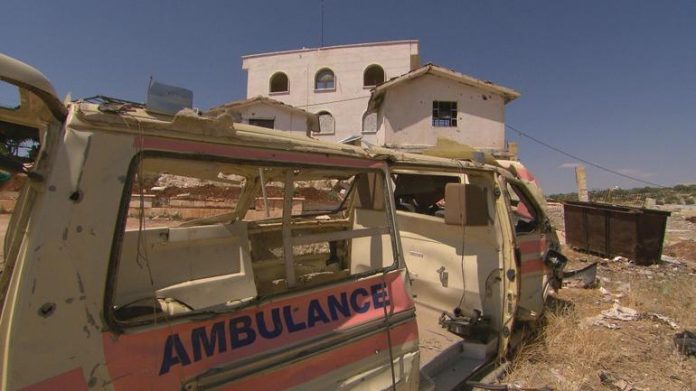 Syria's dictator is trying to quash the remnants of rebellion by bombing hospitals. Still, brave doctors in the country, many of them American volunteers, are risking everything to save lives

Bashar al-Assad destroyed Syria in order to remain its president. The dictator, son of a dictator, has committed every war crime on the books; bombing civilians, gassing neighborhoods, torturing prisoners. An estimated 500,000 people have been killed in the civil war and 12 million have been forced from their homes., At the end of 2016, with his allies Russia and Iran, Assad occupied the ruins of Aleppo, Syria's largest city. As we first reported last fall, various rebel groups continue to fight and Assad means to break them with another war crime: the destruction of hospitals. What you are about to see is difficult to watch, but it's worth it. Because standing in Assad's way are courageous doctors, many of them american volunteers, risking their lives to heal the wounds of war.

Video shows a hospital during the siege of Aleppo. From the looks of it, maybe an exhausted father, a distraught mother and a child, at left, curled up on a gurney. Then, an airstrike. This hospital was hit 14 times in six months.

Months later, Al Jazeera reporter Amro Halabi was covering the aftermath of a chemical attack in Aleppo. Once the emergency room filled up, the hospital was hit.

Targeting hospitals is the atrocity that started the Geneva Conventions 153 years ago and led to the creation of the Red Cross. It is the original war crime. Since 2011, there have been more than 450 attacks on Syrian hospitals.

"You work with the understanding that you might find yourself dead, or crippled, or dismembered on the floor next to the people you're trying to save."

Emergency medicine has been driven underground. Every neighborhood airstrike delivers too many patients with too little time. Doctors improvise with scavenged drugs and salvaged equipment. So many doctors have been killed, or have fled, that veterinarians and dentists are pressed to do surgery.

Samer Attar: You work with the understanding that you might find yourself dead, or crippled, or dismembered on the floor next to the people you're trying to save.

Dr. Samer Attar is a leading orthopedic surgeon from Chicago who volunteers in Syria's makeshift hospitals.

Samer Attar: The bombs would land so close they'd knock you off your feet. And at times, they would directly hit the hospital. But all I did was look around and follow everyone else's lead because they're like rocks. They don't lose their cool, they don't lose their composure. They just keep working.

Dr. Attar enlisted in the Syrian American Medical Society, which began in the 1990's as a professional association. But, since the revolution, these American doctors have raised nearly $150 million in aid and sent more than 100 members into rebel-held Syria, including Aleppo where Dr. Attar worked.

Samer Attar: We'd find ourselves doing surgeries, sometimes without anesthesia, on people lying on gurneys in the hallway, because you're just so over-stretched.I remember another child that was brought in. She couldn't have been more than five. Her whole body was pockmarked with shrapnel from her chest to her belly and one of the surgeons in Aleppo, a Syrian surgeon, heroically rushed her to the operating room, and opened up her belly, and stopped the bleeding in her liver. But she had lost so much blood. We can't. You can't give all of your blood to save one life if can you save it to give a little bit each to five who you know will make it. And I saw that all the time.

Scott Pelley: Did that little girl make it?

Six-year-old Mohammad Kament was destined for a burial shroud until a Syrian surgeon saved his life.

Mohammad's house had been hit by a mortar and became unforgettable to Samer Attar.

Samer Attar: I remember him because he lost his mother and his siblings and both of his legs. The day before I left Aleppo he asked me to bring back robotic legs, prosthetic legs if I ever returned. And if only it were that simple. He thought that I could deliver them like a pair of gym shoes. And that everything would be back to normal. He'd go back to running around and playing soccer.

Basel Termanini: It's the worst humanitarian crisis on our lifetimes and because those are our own people.

Basel Termanini is vice president of the Syrian American Medical Society. He's a gastroenterologist in Steubenville, Ohio. He told us the society donated 120 ambulances, pays the salaries of more than 2,000 Syrian staff, equips 135 medical facilities and is building more.

Basel Termanini: There have been more than 500 attacks on health care facilities. And we have more than 800 casualties from the staff. So we're trying to move all those facilities underground.

Scott Pelley: Did you say 800 medical professionals have been killed in attacks on hospitals?

Basel Termanini: Yes. More than 800. I think now it's, the latest is 850. There are attacks on hospitals. People are detained, tortured to death. There is shelling also, mostly airstrikes and barrel bombs. This is number one killer for the health staff.

Scott Pelley: Who are some of the men and women who work with you inside Syria?

Basel Termanini: Those are our heroes. They know the risk in their lives, every day risking their family's life. But they know if they migrate and go out, nobody is willing to provide those services. So then we try to support them. Whatever they need, we try to fulfill.

What they need, is to know that they are not alone.

Scott Pelley: How many trips in does this make for you?

Samer Attar: This is number 4.

We traveled into Syria with Dr. Attar. The road to Aleppo was in the hands of an Islamist rebel group known as Ahrar al-Sham. Our route was through Idlib, the last whole province still at war.

We found a hospital hit by an airstrike but, somehow, still running.

On the darkened but functioning side of the hospital, Samer Attar spotted Abdurraham Ghanim. They had worked in Aleppo before its fall, at the end of 2016.

Abdurraham Ghanim: It was a massacre.

Abdurraham Ghanim: So much bodies, so much injuries, we did our best.

Scott Pelley: Which is all you can do.

Abdurraham Ghanim: Yes. It wasn't enough, but what we could do.

Aleppo's underground hospitals were hard to destroy, so Assad tried to root them out by doubling down on his war crimes. We found two witnesses to this. Dr. Farida who performs cesareans on wounded women and her husband, Dr. Abdulkhalek, an eye surgeon.

Abdulkhalek: They couldn't destroy this building. So, they used a chemical weapon in the last two days of the siege we noticed the smell of chlorine. And we rushed all of the staff, all the patient, to the inner room in that basement. And during this time many children came to our hospital. And we had just one remaining bottle of oxygen. So, we had to transfer the mask between the children, one small amount of oxygen for each other.

No one died in the chlorine attack. But the gas shut down the hospital for a time. Now, more sophisticated underground hospitals are being built by the Syrian American Medical Society. In the countryside, they're excavating a cave to replace a regional hospital that serves more than 200,000 people.

Scott Pelley: The cave was already here, the limestone had eroded away over thousands of years. Then the engineers came in, they cleared out the cave, and they lowered this floor about six feet. When the hospital is finished, it will have three operating rooms, twelve inpatient beds, and a state of the art emergency room.

The Syrian American Medical Society has spent more than $3.5 Million on cave hospitals — the moneys come from private donations and the United Nations.

For every life saved, there is a lifetime of recovery. So the Syrian American Medical Society supports this hospital on the Syrian border, inside Turkey — it is a safe place for long-term healing.

Tamer Ghanem: A lot of these patients had very severe injuries such as, you know, severe, very extensive burns.

Tamer Ghanem is a surgeon from Detroit who re-sculpts the disfigured. He volunteers when he can get away, about a week at a time.

Scott Pelley: What can you do for these people?

Tamer Ghanem: It's very rare that one surgery would fix everything. Some of the surgeries I cannot do here just because of limitation of the equipment. Some of these injuries are so horrific that, really, you're not able to rebuild the face back again with the tissues that that patient has.

Scott Pelley: It must be frustrating for you to see these patients in so desperate a need and you not being able to help them.

Tamer Ghanem: Especially, I have my own children, and it's very difficult to see children you know, with those injuries and their parents and how that affects them.

One of those injured children in the Turkish hospital was Mohammad Kament, the same boy from Aleppo who asked American doctor Samer Attar for those robotic legs, three years ago. This is the first time they had seen each other since then. Mohammad's prosthetics were supplied by a New Hampshire based charity called NuDay Syria. We asked Mohammad what he wants to be, but we could have guessed, he wants to be an orthopedic surgeon.

The Syrian American Medical Society says that, over seven years of war, it has delivered 100,000 babies and supported almost 400,000 surgeries.

Scott Pelley: Why risk your life for this?

Samer Attar: Well, the Syrian nurses, and the doctors, the rescue workers that I met, told me that they would rather risk their lives dying in Syria trying to save lives than grow old comfortably from a distance watching the world fall apart. And I thought 20 years from now, I didn't want to look back and say that I wasn't a part of that.

The war against the hospitals is designed to break the will of the rebellion. But as long as some will fight for mercy, there is reason for all to hope. 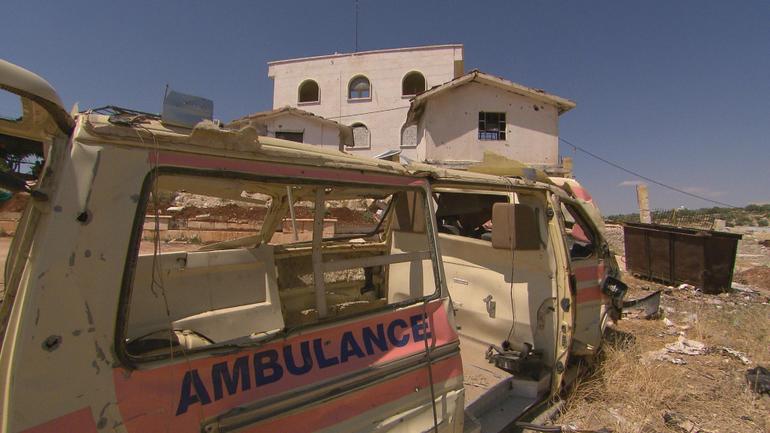 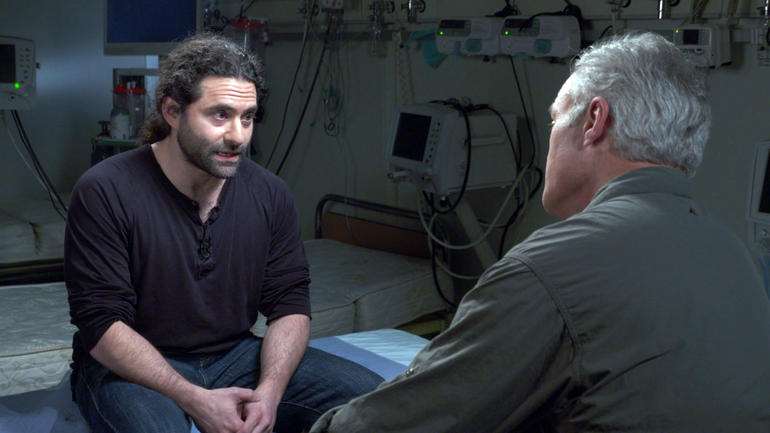 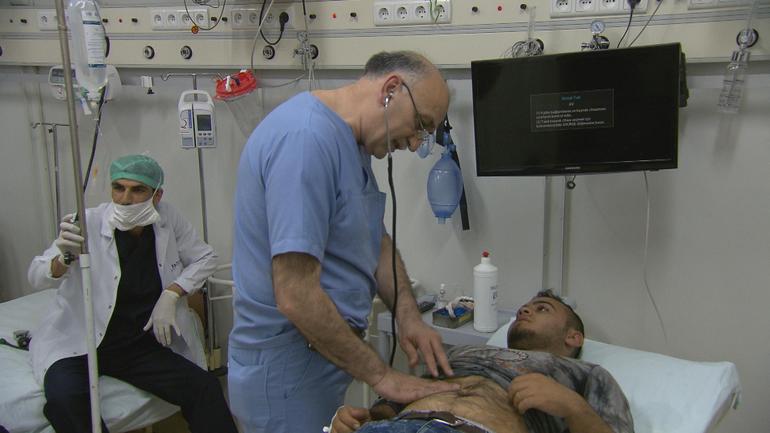 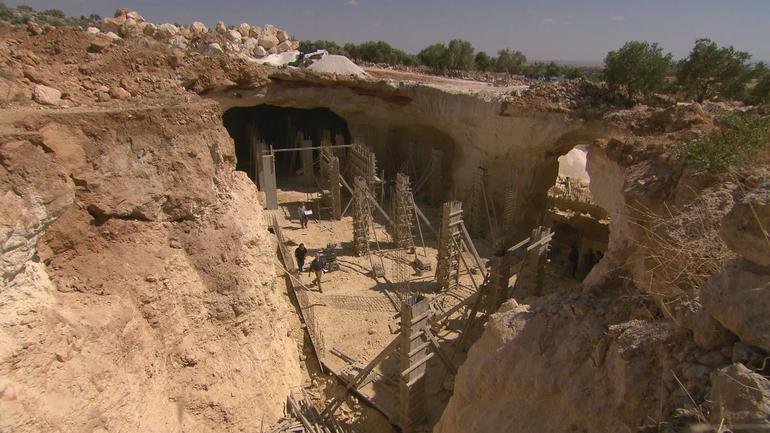 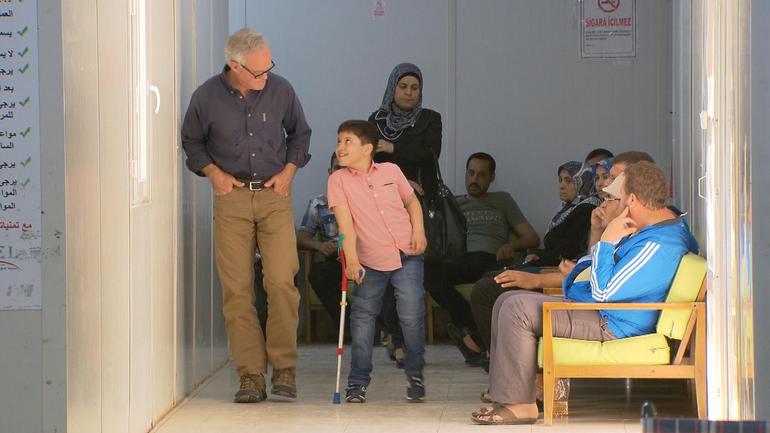