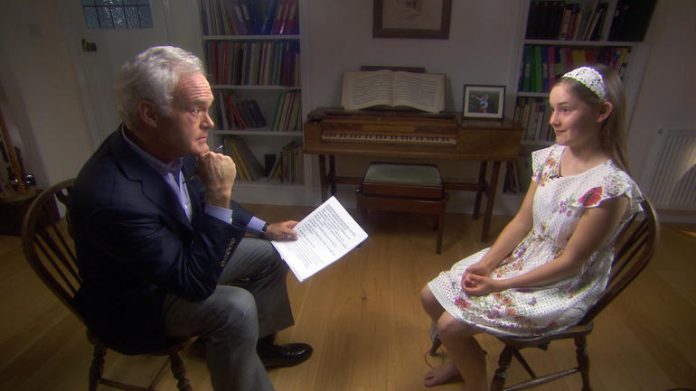 Alma Deutscher: The prodigy whose "first language" is Mozart

Alma Deutscher was playing piano and violin by the time she was 3 years old and wrote her first opera at 10. For her, making music seems as natural as breathing

We cannot explain what you're about to hear. Science just doesn't know enough about the brain to make sense of Alma. Alma Deutscher is an accomplished British composer in the classical style. She is a virtuoso on the piano and the violin. And when we aired this story last November she was 12 years old. She's different from other prodigies we have known, because at the age of 10 she wrote an opera, which demands comprehensive mastery; not just how to play the piano, but, what is the range of the oboe? What can a cellist play? We don't know how she understands it all. It seems that Alma was born that way.

Scott Pelley: What is your earliest musical memory?

Alma Deutscher: I remember that when I was three, and I listened to this really beautiful lullaby by Richard Strauss, and that was when I really first realized how much I loved music. And I asked my parents, "But how can music be so beautiful?"

Those notes of Richard Strauss ignited a universe. At three, Alma was playing piano and violin.

Scott Pelley: When did the composing begin?

Alma Deutscher: When I was four, I just had these melodies and ideas in my head, and I would play them down at the piano. And sometimes my parents would think that I was just remembering music that I'd already heard before. But I said, "No, no, these are my melodies, that I composed."

"For me, it's strange to walk around and not to have melodies popping into my head."

Last year, in Austria, we watched Alma prepare her violin concerto and the premiere of her piano concerto. Joji Hattori conducts the vienna chamber orchestra.

That night, the soloist was the composer herself. Remember, she wrote all the notes for all the instruments.

We could see, Alma was living a story.

A story of loss.

A story of redemption.

Scales of emotion beyond a child.

Scott Pelley: Do you have any idea where this comes from?

Scott Pelley: It's very quiet in my head. I must say.

But, it appears, it's never quiet in hers. When she has nothing to do, the music flows from its mysterious source as fluently as breath.

Her parents, Guy and Janie, are professors. She teaches old English literature, Guy is a noted linguist. Both of them are amateur musicians.

Scott Pelley: Do you feel that there's anything about Alma's gift that you don't understand?

Guy Deutscher: We don't understand creativity. Does anyone? I mean I think that's the crux of the mystery. Where does it come from? This melody popping into your head. It really is a volcano of imagination. It's almost unstoppable.

It was Guy who taught her how to read music.

Guy Deutscher: I thought I was an amazing teacher because you know, I hardly had to–

Scott Pelley: You thought it was you!

Guy Deutscher: I thought it was me. I hardly had to say something and you know her piano teacher once said 'it's a bit difficult with Alma It's difficult to teach her because one always has the sense she'd been there before.'

Janie Deutscher: She wouldn't be able to imagine life without dreams and stories and music. That's as unimaginable to her as it is strange for other people to think about a girl with melodies in her head.

Alma Deutscher: I love getting the melodies. It's not at all difficult to me. I get them all the time. But then actually sitting down and developing the melodies and that's the really difficult part, having to tell a real story with music.

"I think I would prefer to be the first Alma than to be the second Mozart."

The story Alma tells in her opera, is Cinderella, but it's not the Cinderella you know.

It seemed demeaning to Alma that Cinderella was attractive because her feet were small so she cast Cinderella as a composer and the prince, as a poet.

Alma Deutscher: Cinderella finds a poem that was composed by the prince and she loves it and she's inspired to put music to it. And in the ball she sings it to the prince.

Alma Deutscher: I think that it makes much more sense if he falls in love with her because she composed this amazing melody to his poem, because he thinks that she's his soul mate, because he understands her.

Scott Pelley: Well, people can fall in love with composers.

Scott Pelley: I think this may be one of those times.

They fell in love with Cinderella in its first production in Vienna.

Scott Pelley: There is another composer who had an opera premiere in Vienna at the age of 11. Mozart. People compare you to Mozart. What do you think of that?

Alma Deutscher: I know that they mean it to be very nice to compare me to Mozart.

Scott Pelley: It could be worse.

Alma Deutscher: Of course, I love Mozart and I would have loved him to be my teacher. But I think I would prefer to be the first Alma than to be the second Mozart.

In Israel, Mozart joined Alma on stage, she played his piano concerto with a cadenza. In a cadenza, the orchestra stops and the soloist breaks away in music of her own making.

Alma Deutscher: It's something that I composed because you see it's a very early concerto of Mozart and the cadenza was very simple. It didn't go to any different keys.

Alma Deutscher: And I composed quite a long one going to lots and lots of different keys doing lots of things in Mozart's motifs.

Scott Pelley: So you improved the cadenza of Mozart?

Robert Gjerdingen is a professor of music at Northwestern in Chicago. He has been a consultant to Alma's education.

Robert Gjerdingen: It's kind of a comet that goes by and everybody looks up and just goes, "Wow." I sent her some assignments when she was six, seven, where I expected her to crash and burn, because they were very difficult. It came back, it was like listening to a mid-18th century composer. She was a native speaker.

Scott Pelley: And the names that you just mentioned are the ones that live for centuries.

Robert Gjerdingen: Yes. She's batting in the big leagues. And if you win the pennant, there's immortality.

The route to immortality leads through California. Last December, Opera San Jose staged Cinderella in Alma's American debut. She was the belle of the ball, on the piano, organ and violin.

Alma Deutscher: That would be a bad sign, yes.

"I know that that life is not always beautiful. That there's also ugliness in the world. That's why I, I've learned, that I want to write beautiful music because I want to make the world a better place."

Fortunately she doesn't have to choose. This is her composition, Violin Concerto Number One.

Alma Deutscher: It's extremely jolly and very happy and jocular that movement. I want to make the people who listen to it laugh and be happy. The first movement of the violin concerto is quite the opposite. It's very dark and dramatic.

Scott Pelley: What does a girl your age know about dark and dramatic?

Alma Deutscher: Well yes, that's an interesting question because you know what? I'm a very happy person so I have lots of imaginary composers. And one of them is called Antonin Yellowsink.

Antonin Yellowsink, Alma's imaginary composing friend, is an insight into the music of her mind. Alma told us that she made up a country where imaginary composers write, each in his own style of emotion.

Scott Pelley: So how many composers do you have in your head?

Alma Deutscher: I have lots of composers. And sometimes when I'm stuck with something, when I'm composing, I go to them and ask them for advice. And quite often, they come up with very interesting things.

Even the real world is magical. The Deutscher's moved to the English countryside to be near a famous school of music. Alma is privately tutored and homeschooled alongside her sister Helen who also knows her way around the piano and the tree house.

Scott Pelley: I usually don't ask people your age this question, but, what have you learned about life?

Alma Deutscher: Well, I know that that life is not always beautiful. That there's also ugliness in the world. That's why I, I've learned, that I want to write beautiful music because I want to make the world a better place.

We cannot know how Alma Deutscher channels her music like a portal in time. But in a world, too often ugly, and too often overburdened with explanation, it's nice to take a moment and wonder. 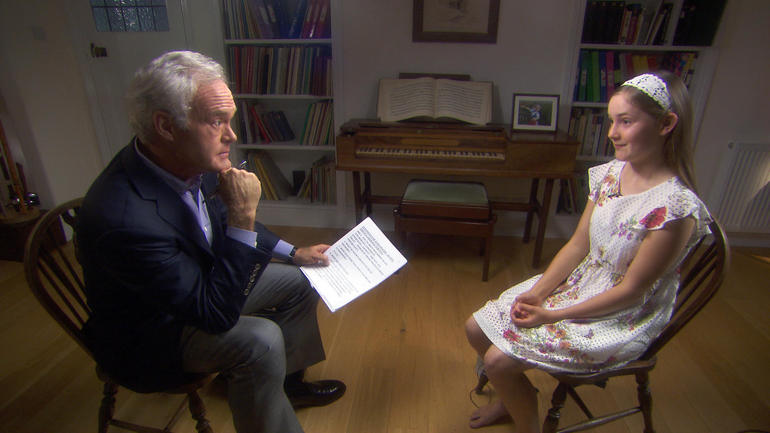 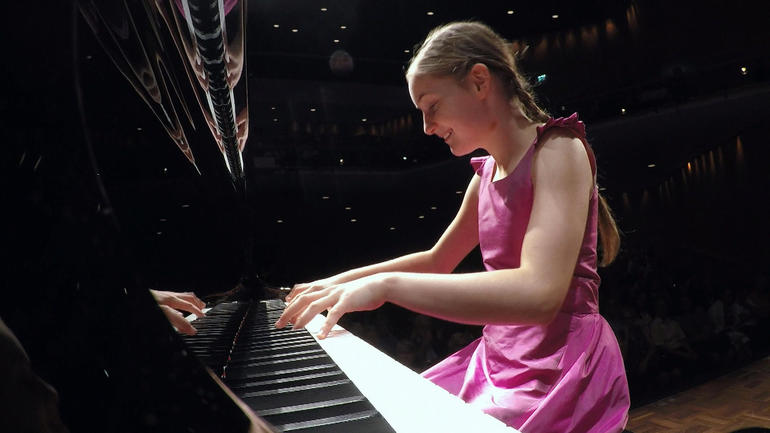 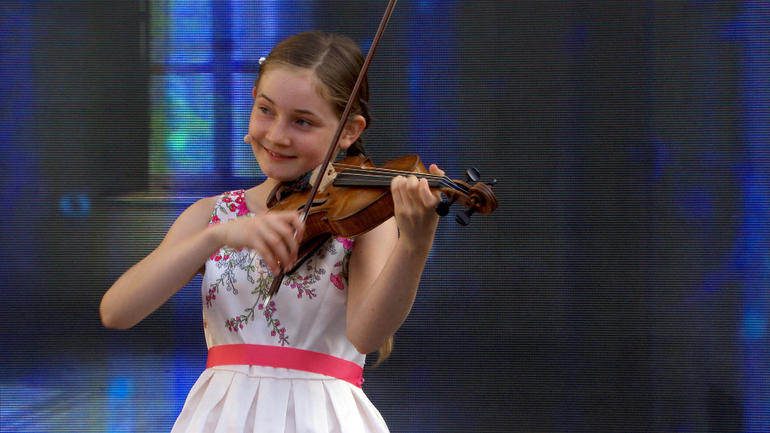 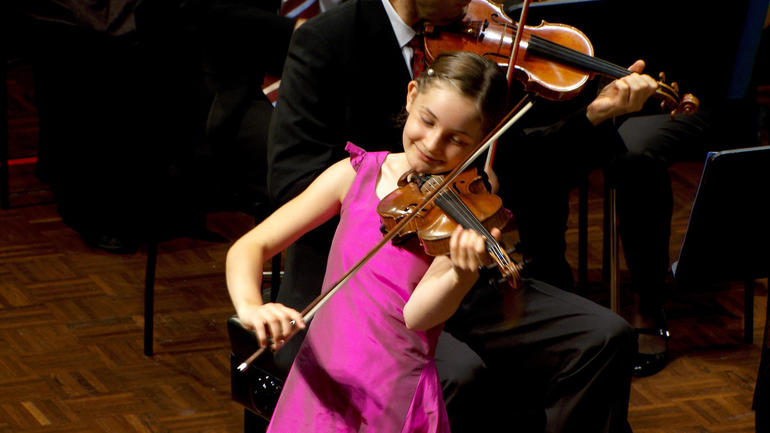