After 28 years in space, the Hubble Space Telescope is sending back some of its most beautiful and revealing images from across the vast universe

When we look up at the stars, it's humbling to realize we're only getting a peek at what's up there, that way beyond what's visible to the naked eye lie wondrous galaxies we never knew existed… until the Hubble Space Telescope. For 28 years, since it was launched, Hubble has been sending us stunning images of the vast heavens. As we first told you in October, astronauts have repeatedly upgraded Hubble over the years, making its discoveries increasingly dramatic. Tonight, we'll take you back up to Hubble, and billions of lightyears beyond, to see some of its latest, most spectacular revelations.

NASA celebrates Hubble's birthday each year by giving us a gift — a new, breath-taking view of our universe. The latest birthday card: this elegant swirl of galaxies dancing in tandem deep in space. Last year — this bubble of stellar gases floating among the stars, like a diaphanous, cosmic jellyfish. Hubble has shown us radiant rose-shaped galaxies stretching across deep space; and dramatic towering clouds of gas teeming with the stuff of creation. Stars are born here. Year after year, in the infinite black canvas overhead, Hubble paints an ever-expanding picture of our universe — an awe-inspiring light show for us to admire … and for scientists to study.

AMBER STRAUGHN: I believe Hubble has been the single most transformative scientific instrument that we've ever built.

"Most transformative," says NASA astrophysicist Amber Straughn, because Hubble keeps improving our understanding of the universe. She showed us what Hubble discovered after staring for days into what seemed to be an empty black patch — a deep, dark void — in outer space.

AMBER STRAUGHN: The original Hubble deep field is located just above the Big Dipper. It's a part of the sky that most people are familiar with. It's a blank piece of sky.

"I believe Hubble has been the single most transformative scientific instrument that we've ever built."

BILL WHITAKER: So just nothing in here, just darkness.

AMBER STRAUGHN: Nothing at all. Complete darkness. And then, when we look at it with Hubble, what we see is thousands of galaxies.

AMBER STRAUGHN: Galaxies outside of our own. Something we never imagined.

BILL WHITAKER: Is it that Hubble just stares into that dark spot until the light penetrates and reveals itself?

AMBER STRAUGHN: That's exactly what happens. It's sometimes many, many, many days of just staring at one part of the sky and allowing the photons to collect on your detector.

BILL WHITAKER: And this is what's revealed.

AMBER STRAUGHN: And this is what's revealed.

But Hubble was just warming up. That was 23 years ago. Since then Hubble has stared deeper and longer into space with enhanced equipment.

AMBER STRAUGHN: In this particular image, there are 10,000 galaxies. So every single point of light is an individual galaxy, its own little island universe. And so this is a real visualization of the distances of these galaxies. So sort of like—

AMBER STRAUGHN: –3D, like we're flying though. So we can make these images 3D because we know how far away the galaxies are. What Hubble has essentially given us is the size of the universe. Hubble has taught us that the universe is filled with hundreds of billions of other galaxies.

And now the latest analysis of Hubble's data reveals there could be more than two trillion galaxies—10 times more than previously thought. Typical galaxies, like our Milky Way, have 100 billion stars. That means the total number of stars—or suns out there—is 2, followed by 23 zeros. That's called 200 sextillion. To get some sense of how many stars that is, we went to Adam Riess, who won a Nobel Prize for his work on Hubble.

ADAM RIESS: This is more stars in the visible universe than grains of sand on the beach.

ADAM RIESS: On all the beaches on Earth.

BILL WHITAKER: And Hubble has shown us this?

ADAM RIESS: It has. In many cases, it has allowed us to see what some of the most distant galaxies look like and how many stars were in them. And we've been able to add it all up.

BILL WHITAKER: Hubble has been called a time machine — that it looks back in time. What has been the most astounding part of that for you?

ADAM RIESS: I study explosions of stars called supernovae. It's like fireworks. It's only visible for a short period of time, in this case, a few weeks. And that light has been traveling to us for 10 billion years. It began its journey when the Earth wasn't even here, And over those 10 billion years, our planet formed. Life developed. We built the Hubble Space Telescope. We opened the aperture door. And in the last one-billionth of one percent of that journey that the light made, we opened the door just in time to catch it.

Hubble almost didn't catch anything. The first pictures it sent back were blurry because of a microscopic flaw in the mirror. The Space Agency launched a daring mission to fix it.

Astronauts have made five trips to Hubble to repair and upgrade its equipment. John Grunsfeld, known as the Hubble repairman, flew three of those missions, to a telescope the size of a school bus, orbiting 300 miles above Earth.

JOHN GRUNSFELD: Just about anything that we can easily change and upgrade and fix has been fixed.

BILL WHITAKER: The workings of the telescope, all of that has been transformed.

JOHN GRUNSFELD: Yeah. It is like a new telescope.

BILL WHITAKER: On your last mission you come out of the airlock and you've got this big smile on your face.

JOHN GRUNSFELD: I thought, You know, I can't imagine anywhere I'd rather be than outside the space shuttle in my space suit next to the Hubble Space Telescope. I was just so happy.

Hubble has changed what we know about the universe—its structure, evolution, it's age—13.8 billion years. Hubble showed us the marvel and majesty of stars being born.

AMBER STRAUGHN: This is a region of gas and dust that's churning up new baby stars. And now we've learned with Hubble, not only stars but also baby planet systems.

BILL WHITAKER: Most of these stars have planets going around them?

AMBER STRAUGHN: Most stars actually do have planets. When I was a kid, we only knew of the planets inside our solar system. And now we know that the planets are absolutely everywhere.

Astronomer Heidi Hammel specializes in Hubble's work within our solar system. With the telescope she saw huge fragments of a comet slam into Jupiter creating giant impacts.

HEIDI HAMMEL: When I first heard that a comet was going to hit Jupiter, my reaction was, "Eh. So what? Jupiter's huge. Comets are small. And so when I saw the first impact site and it was huge and dark, I was flabbergasted. This is where the comet has smacked into the planet at such a high velocity that it's caused an explosion the equivalent of many, many millions of atomic bombs.

HEIDI HAMMEL: The Earth is the size of that ring. And so if this event, had happened on Earth it—

HEIDI HAMMEL: Yeah, We we call that a biosphere-changing event, which basically means we'd be gone.

Hubble orbits high, outside Earth's atmosphere so it can see a wide spectrum of light our atmosphere blocks. Beyond Earth's protective layer, Hubble's ultraviolet camera can spot dazzling displays like this glowing halo on top of Jupiter.

HEIDI HAMMEL: Up in the northern hemisphere what you're seeing is the glowing aurorae. An aurora happens when the planet's magnetic field has charged particles that interact with the upper atmosphere. What you're seeing there is actually charged particles from the sun. They get swept up in Jupiter's strong magnetic field. And then it's mirrored in that shimmering that you see inside the aurora oval.

BILL WHITAKER: And you would not be able to see that with an Earth telescope?

HEIDI HAMMEL: You could never see those aurorae because our atmosphere has an ozone layer that absorbs the ultraviolet light.

Hubble also found a similar blue hue at the bottom of Saturn. The telescope's most iconic picture is this: the pillars of creation, a stellar breeding place. Amber Straughn showed us what a difference Hubble's upgraded infrared camera made, just three years ago.

AMBER STRAUGHN: Stars are born inside these dust clouds. And this is gonna give you a clue on why infrared is so important is because in infrared light, what you see is the stars inside shining through.

BILL WHITAKER: You see the stars inside. How big is this cloud area?

AMBER STRAUGHN: Top to bottom, these pillars are about ten light years, which is about 60 trillion miles.

"Big" and miraculous with constant celestial regeneration. Straughn calls this "the everything picture" because you can see old stars blowing up — and new stars forming.

AMBER STRAUGHN: Any time you see these sorts of dark cloudy regions, you can imagine that there's stars being born inside there.

BILL WHITAKER: Where are the dying stars?

AMBER STRAUGHN: And the dying stars, we think that this one could explode any day, literally, or it could be a thousand years from now. But near near term in astronomers' —

AMBER STRAUGHN: Right. So big stars, when they die, they explode and send their contents into the surrounding universe. And these contents are what seed future stars and future planets and help to seed life, ultimately. The iron in your blood and the calcium in your bones was literally forged inside of a star that ended its life like this.

BILL WHITAKER: So we are all stardust.

AMBER STRAUGHN: We literally are stardust. We are viscerally made of the stars. One of the things I think is remarkable about this image is it shows you how colorful the universe is.

Blue stars are the youngest and hottest. White and yellow stars, like our sun, are mid-life; while red stars are the oldest and coolest. John Grunsfeld has a cool claim to fame. He's the last human to touch Hubble. He gave it a farewell pat.

BILL WHITAKER: Hubble was planned to live for 15 years. It's now been 27. How much longer can Hubble go?

JOHN GRUNSFELD: I'm reasonably confident it will continue another three to five years.

That means for a while at least, Hubble will work in tandem with its successor, the much larger James Webb telescope scheduled to launch in 2021. Webb should be able to detect light from the very earliest galaxies. The farthest back Hubble can see is this red blob, a galaxy from 400 million years after the Big Bang. Webb should take us much closer to the beginning of time.

JOHN GRUNSFELD: So the James Webb Space Telescope was specifically designed to see the first stars and galaxies that were formed in the universe. So we're gonna see the snapshot of when stars started. When galaxies started. The very first moments of the universe. And my bet? There's gonna be some big surprises. 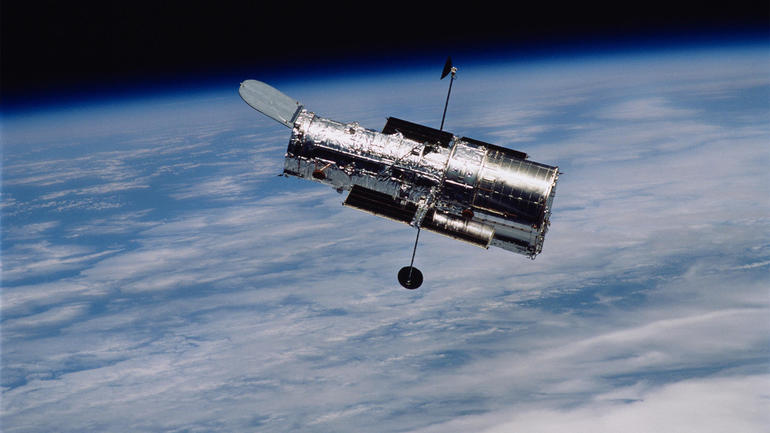 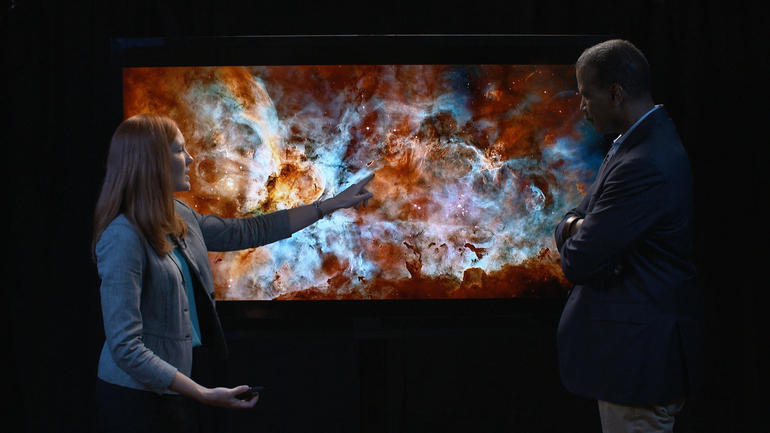 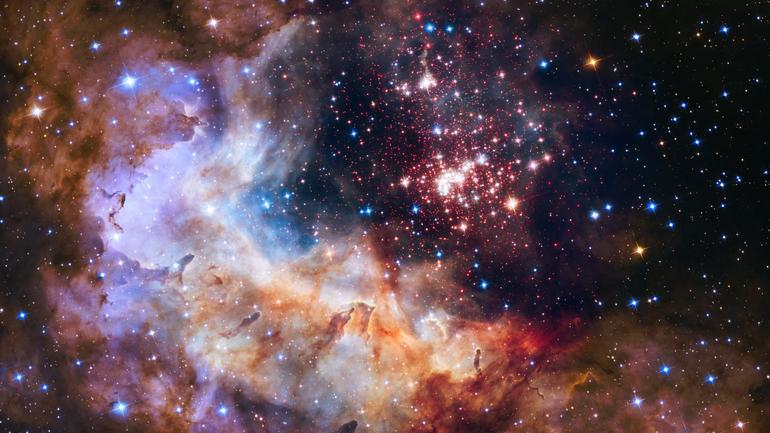 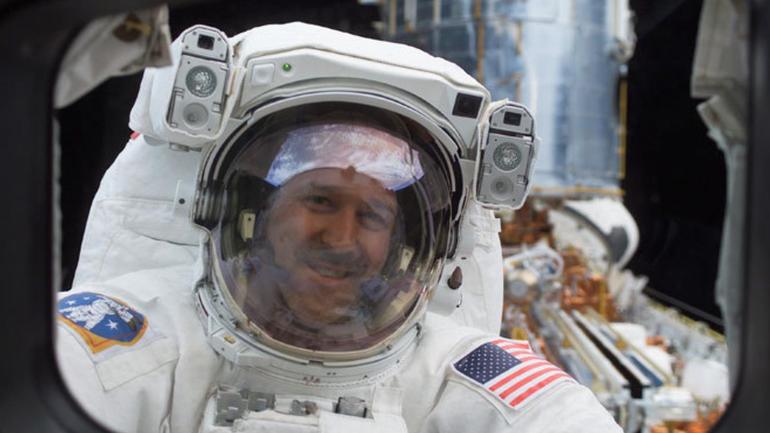 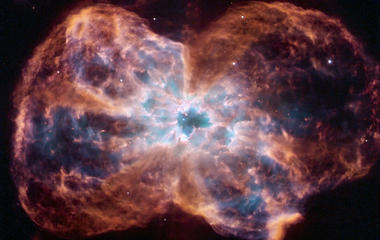 Some tenants being forced from their homes after eviction moratorium expired

Walmart brings back mask mandate for workers in COVID hotspots

Why has the NYC subway gone off the rails?