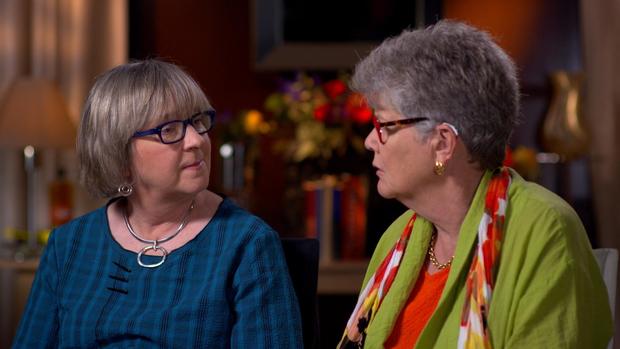 Bill Whitaker reports on FTD, a devastating illness and the most common form of dementia for Americans under the age of 60

This is a story about the cruelest disease you have never heard of. It's called frontotemporal dementia, or FTD. And given the devastating toll it takes on its victims and their families, it ought to be much better known than it is.

FTD is the number one form of dementia in Americans under the age of 60. What causes it is unclear, but it attacks the frontal and temporal lobes of the brain, which control personality and speech, and it's always fatal. It is not Alzheimer's disease, which degrades the part of the brain responsible for memory.

With FTD, people either display such bizarre behavior that their loved ones can hardly recognize them, or they lose the ability to recognize themselves. As we first reported in May, that's what happened to Tracey Lind one day a few years ago as she was standing in a public restroom.

Tracey Lind: I was washing my hands and I looked in the mirror and I did not recognize my own face.

Tracey Lind: No. I looked in the mirror, and I kept looking, and I remember I kept looking at this woman wondering "who was she?"

This is who she was: the Very Reverend Tracey Lind, dean of the Episcopal Cathedral in Cleveland, Ohio, one of the city's most prominent preachers and civic leaders. She was 61 years old when both she and her spouse Emily Ingalls began to notice trouble with things Tracey had always done very well; like finding the right word, recognizing congregants and friends' faces, and of course, her own.

Bill Whitaker: When that happened, were you— were you scared?

Tracey Lind: Oh, I was scared to death.

Bill Whitaker: Emily, what did you think was happening?

Emily Ingalls: I thought there's something not right with her brain.

On election day 2016, Tracey Lind got the diagnosis: frontotemporal dementia. She has what's called the "speech variant" of the disease, which, among other things, attacks the part of the brain where language lives.

Tracey Lind: Sometimes you just— you're fine and you're on. And then there are other times that the words just don't come out. I mean, it— even if I know what the word is, somet— sometimes I feel like I'm playing bingo. And when I find the word, it's— I— I shout it. I— like I feel like an imbecile. You know. Apple. Oh, yeah! Apple. That's it. And I get all excited.

This is acutely painful for Tracey, because being a powerful, effective speaker has always been at the core of her identity.

Bill Whitaker: One of the first things you did once you got this diagnosis was to resign from your job as dean at Trinity—

Bill Whitaker: —Cathedral. Why— why— why'd you take that action so quickly?

Tracey Lind: Mainly it was I knew I was starting to fail even though I was faking it pretty well.

Since stepping down, Tracey and Emily have traveled around the country and the world, speaking and preaching about her FTD. Or as Tracey puts it, "telling the story of dementia from the inside out."

Tracey Lind in pulpit: I was determined to live what I had been preaching for over 30 years; that out of pain comes joy.

Tracey Lind: I'm gonna face this disease called FTD that I'd never heard of before, and I'm gonna see what I can do with it.

Bill Whitaker: I don't know if you are aware of how unique this situation is that you are in the middle of this decline from dementia and yet, you're so able to articulate what that's like.

Tracey Lind: I am aware of that. I think my curiosity is what's getting me through it. 'Cause otherwise, Bill, I— I— I'm— I'm just gonna lay down and— and— and— and roll up in a ball.

Emily Ingalls: Do you want help?

Tracey Lind: Can you help, please?

Dr. Bruce Miller: This is the way this very sad illness presents.

Dr. Bruce Miller may be the world's leading expert on frontotemporal dementia. He runs a lab at the University of California San Francisco that's doing cutting-edge research on the two main forms of FTD — the speech variant that Tracey Lind has, and a behavioral variant that attacks personality, judgement and empathy.

On the day we visited Dr. Miller's clinic, he and his team met with FTD patient Thomas Cox and his wife Lori. At first glance, Thomas seems fine, but he's not.

Dr. Bruce Miller: Okay. And has that affected you so far?

In fact, Lori Cox says that starting a few years ago, Thomas lost interest in her, in their son, and in his work so much that he was fired from his job. By now, he's pretty much reduced to looking at photos on his phone.

Lori Cox: I can blame the disease. I can say that the disease stole my— my husband.

Dr. Bruce Miller: When a family sees someone with this illness, they don't recognize them. This is not— the person I married that I love. This is not my father or my mother.

Bill Whitaker: You have said that FTD attacks people at the very soul of their humanity.

Dr. Bruce Miller: This is profound as anything that can happen to a human being. It robs us of our very essence of our humanity, of who we are.

Bruce Miller says because so many cases are first misdiagnosed as mental illness, it takes an average of three years and several expensive brain scans to get a correct diagnosis of FTD.

Bill Whitaker: So if you see someone who is suffering dementia at a younger age—

Dr. Miller showed us this composite image of two of the major degenerative brain diseases.

Bill Whitaker: What does the blue indicate?

Dr. Bruce Miller: The blue indicates is that there's loss of tissue. When we see loss of tissue in that brain region, we know people have lost their interest in life, their drive. They do less, they care less about other people.

That loss of empathy, Miller says, can produce dangerous, impulsive, even criminal behavior. And those with behavioral FTD are rarely aware that anything has changed.

Amy Johnson: He went from being a caring, doting father and husband and it just seemed like he flipped a switch off. And he had no idea that he had changed. He had no idea.

Amy Johnson and her husband, Mark, married in 2006, settled in the small Minnesota town of Windom, and now have four young children, three boys and a girl. Four years ago, Amy says Mark suddenly seemed to stop caring about her and the kids.

Amy Johnson: That's the first time that I really remember thinking to myself, "What happened? Where did you go?"

Amy recalls a day when she left Mark in charge of their sons, then three and two, only to come home and find the boys playing outside, alone by a busy street, while Mark sat inside watching TV, oblivious. On other days, he began to display compulsive behavior she had never seen before.

Bill Whitaker: And these changes that you saw, did you ask him, "What's going on?"

Amy Johnson: Yeah. And he just said, "Oh, I don't think anything's different, is it?"

It was. Mark began making inappropriate remarks to a female co-worker at the company where he worked as a manufacturing engineer.

Bill Whitaker: He was fired?

Amy Johnson: Uh-huh (AFFIRM). And his reaction was, "Oh— oh, I guess okay. So what's for supper tonight?"

Bill Whitaker: What was your reaction?

Amy Johnson: I was just devastated. I was seven months pregnant at the time with our daughter.

Bill Whitaker: With your fourth child.

Amy Johnson: With my fourth child.

Bill Whitaker: So as this progresses, what's the eventual outcome?

Dr. Bruce Miller: Outcome of this is always death. They—

Dr. Bruce Miller: Always death. We have no way of intervening yet to slow the progression.

As FTD corrodes the brain, it also eventually causes bodily functions to shut down, that's what leads to death. But Bruce Miller is optimistic, pointing to promising research both in his lab and funded by NIH grants to scientists around the country.

Dr. Bruce Miller: Suddenly we have interventions and research that are going on that give me great hope.

Dr. Bruce Miller: I'm hoping in the next five years that— we will have— very powerful therapies in— certain variants of frontotemporal dementia that— may stop it cold.

Tracey Lind and Emily Ingalls have no idea whether any breakthrough will come in time to help them. If not, Tracey will eventually lose the ability to speak at all, and then, the ability to swallow.

Tracey Lind: The not being able to swallow part; that's what's really frightening. So I try to live in the present moment.

Emily Ingalls: I'm not very good at living in the moment, so I worry a lot about the future.

Tracey Lind: Do you worry about- taking care of me?

Emily Ingalls: Yeah. I worry about taking care of you. Sure.

Tracey Lind: What's going to be the hardest part?

Emily Ingalls: I think the hardest part is going to be the loss of the relationship.

Bill Whitaker: Has Emily told you this before?

Tracey Lind: No. I don't think so. (EMILY NODS HER HEAD INDICATING SHE HAS)

As you can see, caregivers suffer as much as patients. For months, Amy Johnson kept Mark at home, even as she mothered four small children andheld a full-time job. But his symptoms got worse and worse.

Bill Whitaker: When did it become clear to you that you— you had to put him in a facility?

Amy Johnson: I went to an appointment with a psychiatric nurse practitioner. And she said, "I think it's time for you to look for a different place. Because now when he thinks of something, the part of his brain that tells him 'that's a bad idea' doesn't work anymore."

When we met him, Mark Johnson was in an assisted living facility about an hour away from home. He had gained nearly a hundred pounds due to compulsive eating. Amy has since moved him to another facility, where he needs one-on-one care. Amy says it's costing her $13,000 a month.

Bill Whitaker: Out of pocket?

Amy Johnson: Out of pocket. He would be devastated to know that that's where his retirement savings are going and that they're not going to his family.

Crippling costs are common for FTD families, and it's often tough to find a facility to care for patients like Mark Johnson. The assisted living industry is not set up for six-foot-three 40-year-olds.

Amy Johnson: How's it goin'? This—

Bill Whitaker: How are you? Very nice to meet you.

Amy visits Mark as often as she can, and invited us to come along one afternoon. He told us he'd just like to go home.

Bill Whitaker: Do you think you need help?

Bill Whitaker: So you unders— you understand why you're here?

Bill Whitaker: I think Amy thinks— I don't wanna put (THROAT CLEARING) words in her mouth, but I think she thinks this is the best place for you right now.

After another minute, Mark said, "all right, see ya," and we left him.

It's clearly painful for amy to see what FTD has done to her husband, and to know what it will do.

Amy Johnson: And they gave him two to five years to live. And—

Bill Whitaker: So how are you doing now?

Amy Johnson: It depends on the day. I miss him a lot. 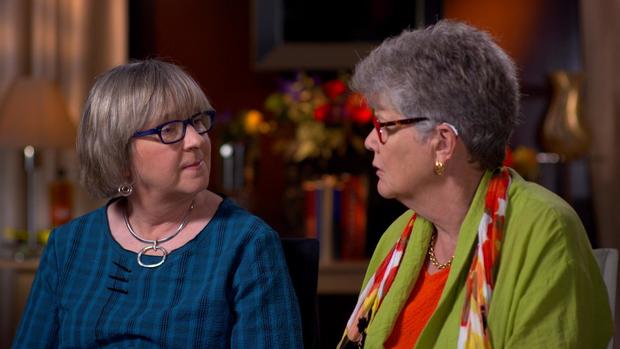 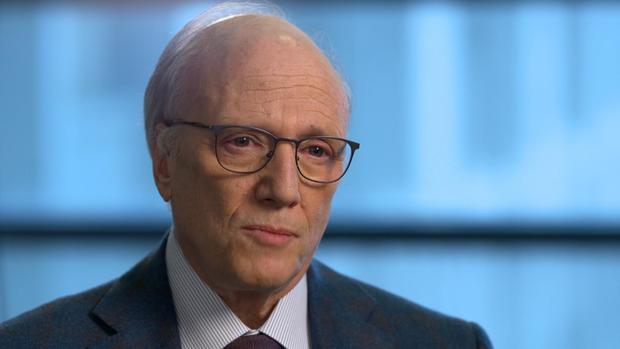 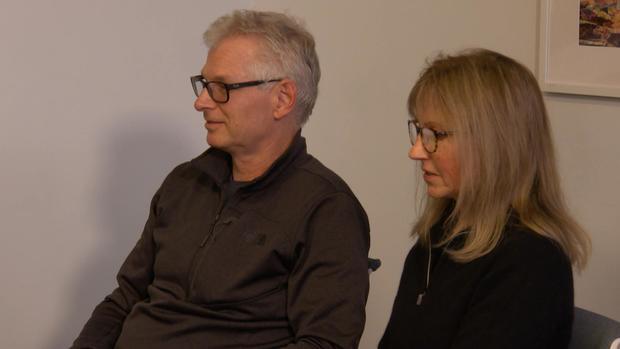 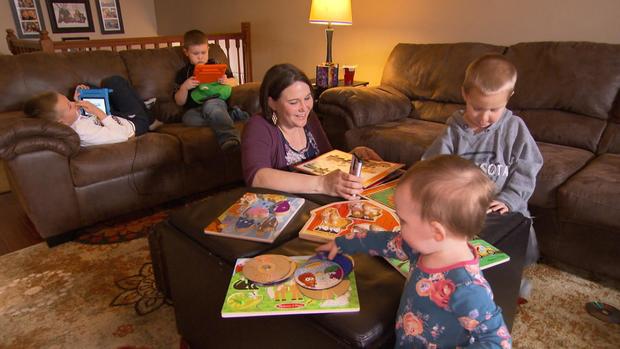 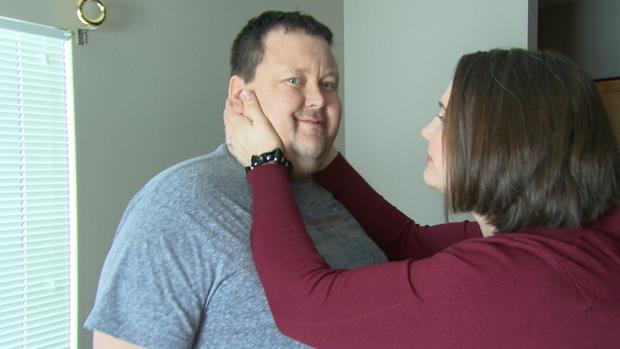