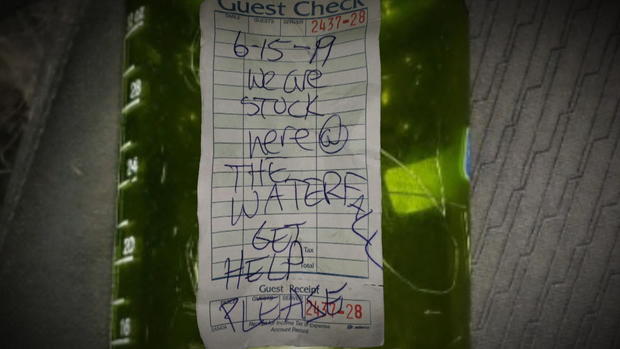 CBS News September 11, 2019, 7:50 AM Message in a bottle leads to rescue of California family stranded on 40-foot waterfall

Curtis Whitson and his family were days into a scenic, Father's Day weekend trip in Pfeiffer Big Sur State Park back in June when they got trapped at the top of a 40-foot waterfall in the Arroyo Seco Canyon. Now, we're learning new details about how Whitson, his girlfriend and 13-year-old daughter were miraculously rescued.

Whitson told the Washington Post he hiked the same route seven years ago and descended the very same waterfall by rappelling down a rope attached to its side. But this time, there was no rope to be found and it was too dangerous to backtrack.

So, stranded miles from the nearest campground and without cell service, he wrote an SOS note on a bar order pad his girlfriend apparently brought to keep score playing card games: "We are stuck here at the waterfall. Get help please." He put the note in a green water bottle, carved "help" into its side, and tossed the message downstream.

Todd Brethour and Tony Ramage are with the California Highway Patrol Air Operations Unit. They found Whitson around midnight on June 15, just hours after hikers found his floating message.

"I've never heard any kind of a message for assistance coming down a river in a water bottle," Brethour said.

At that point, it was too dark to stage the rescue but by the next morning, CHP officers descended on Whitson's campsite, where the family had spelled SOS on a tarp with rocks, and airlifted the trio of hikers to safety.

"It would've been pretty – almost impossible in some areas to actually get out of there, you know?" Ramage said. Added Brethour, "They were really out of options if they hadn't gotten the message out that way, it might've been a while."

Ramage said it was his first Father's Day as a dad which gave him that much more motivation to help Whitson and his family.

Whitson's girlfriend told the Post she's since bought him a new water bottle. She apparently gave it to him with a love note inside. 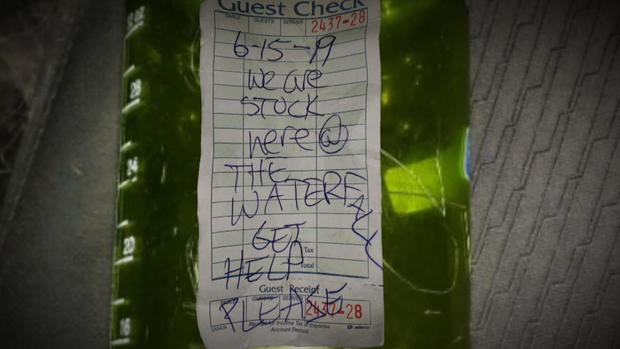 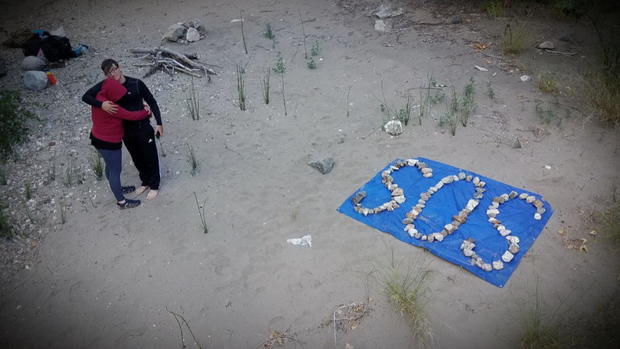